Whitman Biology Professor Gets to the Heart of Heart Health

The first belongs to a 70-year-old man with a blocked artery. As the flow of oxygen-carrying blood slows, his heart strains. Inside the cells of his heart muscle, mitochondria — the organelles responsible for using oxygen to produce energy — split, changing from rod-shaped to ball-shaped. The cells struggle and die. Soon, the man collapses.

The second heart belongs to a 30-year-old woman training for her first 5K race. As she pushes herself to the top of a hill, her heart pumps hard. She breathes deeply, oxygen rushing into her blood. Inside the cells of her heart muscle, mitochondria split. The run is tough, but her heart works to keep her going.

For years, scientists observing a heart cell with split mitochondria would think the cause was disease. The split, or mitochondrial fission, was considered a sign of pathological stress on the heart.

But Michael Coronado, an assistant professor of biology at Whitman College, has challenged this assumption. Last year, Coronado published groundbreaking research demonstrating how fission can be a response to high energy demands on the heart in normal physiological conditions as well as pathological ones. Split mitochondria could appear in the heart of the new runner in training, not just the dying man.

The questions now are how this process works, and how understanding it could change how medicine treats hearts, healthy or sick.

Coronado and his team are ready to answer them.

Presenting a New View on Cardio

“When you exercise, your heart rate goes up — you’ve probably felt that if you’ve ever gone for a run or even walked up a flight of stairs,” Coronado said. “Every time it goes up in rate or the force of that contraction, more energy is needed.”

Coronado’s research focuses on the mechanisms that direct and control how the heart makes energy, but with a new twist.

After earning his doctorate in toxicology from Johns Hopkins University in 2012, Coronado knew he wanted to study the heart. He headed to Stanford University to work as a postdoctoral researcher with Daniel Bernstein, a renowned pediatric cardiologist.

There, Coronado first dug into mitochondrial fission. His studies included an externship with Douglas Wallace, one of the world’s top mitochondrial biologists at the University of Pennsylvania.

In a paper published last year in the journal Circulation Research, Coronado and his co-researchers demonstrated that split and fragmented mitochondria can be a sign of a well-functioning heart. They also identified a signal — the hormone epinephrine — that triggers the process and binds to certain receptors in the membrane of cardiac cells, sparking a series of events inside the cell that results in fission.

Since arriving at Whitman in July 2017, Coronado has continued this research and started a new phase examining exactly what happens on the path from epinephrine signal to mitochondrial fission, and what consequences it has for the heart.

Finding a Home for Heart Research

Coronado has found Whitman to be the perfect place to build his lab and research team — and it’s thanks in large part to a Whittie.

When he was applying for faculty positions, Coronado pursued an opening at Whitman based on a recommendation from his doctoral mentor at Johns Hopkins, DeLisa Fairweather ’87. She felt Whitman would be a good fit for him because she knew he wanted to facilitate undergraduate research, but more importantly, she knew Whitman offered much more. 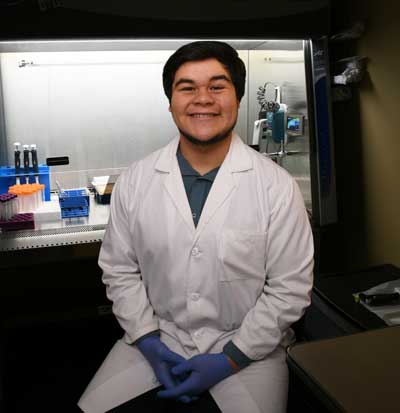 Discovering a Career and a Mentor

When Aaron Rodríguez ’19 took Michael Coronado’s exercise physiology class in spring 2018, he quickly caught on to his professor’s enthusiasm for research. Photo by Shane Prudente

“I told him how great the environment was. Getting a liberal arts education at Whitman taught me how to write well and how to present, which are important when you’re applying for grants and funding, and also to move up into a faculty position,” Fairweather said. “Creativity also comes from a liberal arts environment, and what gets funded in science is not what everybody else is doing — to be a leader in science is to have the idea no one else has.”

With experience at some of the nation’s top scientific institutions, Coronado knew he wanted an academic home that valued high-quality research, but one that also afforded him time to teach undergraduates, which would be unlikely at a large university. He also sought a place where he and his wife could raise their two little girls.

“Whitman is a strong academic institution, and the community allows the quality of life that I was searching for, the balance I was seeking,” he said. “I think I really got it here.”

As soon as he came to Whitman, Coronado went to work putting together a world-class research lab.

While he was at Stanford, the National Institutes of Health (NIH) awarded him the first two years of a grant to support researchers as they transition from postdoctoral positions to tenure-track faculty roles. He was eligible for another three years of funding, and he wanted to prove his work at Whitman was worth NIH’s investment.

It helped that Whitman was investing in Coronado, too. Startup funding from the college helped him renovate his lab space and purchase high-tech tools, such as a special system that can simulate a heart attack in human cells.

His teaching lab, just down the hall from his main lab, includes treadmills for humans and mice, allowing students to conduct experiments right in the classroom.

In March 2018, the National Heart, Lung and Blood Institute awarded Coronado $750,000 as part of an NIH grant.

“I think one of the big things that helped was when I talked to them about the role of research at Whitman,” Coronado said. “Research is an integral component of the Whitman experience for the faculty and for the students. Yes, I’m teaching, but research is a major component of that teaching. That’s one of the reasons why I’m here.”

Building a Team with Heart

A world-class lab needs dedicated researchers. Coronado’s grant pays for a full-time technician, and he often collaborates with his colleagues at Whitman and across the nation, but most of the people working in his lab are students.

“The biggest thing for me is that they are just eager to work,” he said. “They just keep wanting to go further.”

Coronado took on three senior thesis students as soon as he began teaching at Whitman, in part to show the NIH what Whitman student-researchers are capable of. He’s since mentored 14 students, a mix of seniors, juniors and sophomores. Several of these students were introduced to Coronado’s research in his classes, which inspired them to pursue it further.

Undergraduate research involves learning the basics of laboratory science, like how to pose questions, design experiments and be precise. Having enthusiastic, intelligent student-researchers makes the lab more productive. As a result, Coronado is optimistic that his research will address an array of questions about mitochondria’s role in the heart, as well as related questions, such as what roles they play in brain function.

“My students are not just relying on me to ask the questions. They can help generate the questions, and they can add to some of the intellectual development that goes into research,” he said. “Once I teach them, they’re sprinting.”

Unlocking the Key to Heart Health

Coronado is driven to change the world with his research. Scientists are just starting to unlock how important mitochondria are, he said. Studying how they and their related signaling pathways work — in healthy cells and in sick ones — has major medical implications.

His research could lead to a better understanding of how athletes’ hearts adapt to repeated exercise, and how people could develop better exercise capacity.

Exercise helps alleviate all sorts of problems, but not everyone is physically able to do it. Increased knowledge of the cellular-level pathways that exercise triggers could help scientists harness those pathways to give people with limited mobility some of the benefits of exercise.

Beyond that, being able to control small-scale processes in the heart and other organs has the potential to treat major diseases long before dire symptoms start.

“My dad had a heart attack, and my grandfather died of a heart attack. My father-in-law had Parkinson’s disease. All of these have a root cause in the mitochondria and bioenergetics,” Coronado said. “We’re just now being able to develop mechanisms to detect them early, but what I’m trying to do is figure out how you can prevent them from happening in the first place.”

“I’m trying to do research here that will have a big impact on the biomedical community,” he said. “And I want to have Whitman students on the forefront of it.”