Alumni Advocate for the Human Side of Environmental Efforts

An author who wrote about his family’s and our region’s unique relationship with killer whales.

A trained biologist who used her savvy in public policy to protect an endangered native bird.

A filmmaker who documented a grassroots movement to restore beaver habitats.

What these three alumni have in common — aside from graduating from Whitman College — is dedication, not just to the animals that inspire their work but more so to the activists who devote themselves to protecting the natural world.

When she joined Audubon California as conservation project director, Samantha Arthur ’07 didn’t have any specific background in birds. She was hired, she said, because of her experience finding common ground around shared concerns.

“I do a lot of coalition building and working with people who are across the political aisle,” Arthur said. “People who are different than the environmental groups that I work with.”

Statewide surveys measured a 44 percent population decline between 2011 and 2014 alone. Much of her work has focused on helping farmers comply with the Federal Migratory Bird Treaty Act of 1918, which prohibited the killing of migratory, non-game birds, such as bald eagles and owls.

Arthur said the tricolored blackbird, which nests in huge colonies of 10,000 to 20,000 birds, has lost much of its wetland habitat to agriculture and urban uses, as well as the impact of climate change. To adapt, the birds have taken to nesting in wheat fields on dairy farms.

“At these dairies they also have piles of grain that attract the birds. They have water. They have insects. They have all the components that the birds are looking for,” Arthur said. Unfortunately, the tricolored blackbird lays eggs and raises its young at exactly the time that dairy farmers harvest their wheat. The harvesters move slowly enough that the adults can fly off, but the eggs and young are defenseless.

In 2016, Arthur advocated for California to list the tricolored blackbird under the Endangered Species Act. She spurred into action when the Trump administration moved to reinterpret the 100-year-old Migratory Bird Act, saying that the act’s protections only apply to activities that purposefully kill birds, meaning that predictable and avoidable take (killing) is now allowed.

Arthur successfully brokered a partnership between Western United Dairymen and the Natural Resources Conservation Service on a $1.8 million grant to compensate farmers for losses incurred by not harvesting fields occupied by tricolored blackbirds and to create natural areas for the birds to nest in.

“I think that it speaks to the transparent partnership for us to be able to oppose each other politically, but then still come back together to work with each other functionally,” Arthur said.

Being a good listener and being curious are two of the most important skills for building consensus, Arthur said, and she traces learning those skills to her time as a student at Whitman.

An environmental studies-biology major, she said the combination of a quantitative, rigorous science focus and well-rounded study of environmental policy has provided a strong foundation for her work protecting wildlife and solving natural resource problems.

Hailing from the San Francisco Bay Area, Arthur’s family made a pilgrimage to a rural area in Colorado every year. She said it was Whitman’s rural setting, sense of community and environmental studies program that drew her to choose it over other schools.

After Whitman, Arthur first taught high school biology, then worked for the Big Sur Land Trust, a nonprofit that helps private landowners obtain conservation easements on their property to prevent development. In 2014, she earned a master’s degree at the Bren School of Environmental Science & Management at the University of California, Santa Barbara.

One of the things Arthur loves about her current job is how entrepreneurial it is.

“I get a lot of freedom to work on new issues,” Arthur said. “It really reflects exactly what my major was at Whitman. It’s really the combination of the science, the politics and the policy.”

There’s a saying that goes, “To go against nature is part of nature, too.” Embodying that phrase is Jason Colby ’97, the son of a whale catcher who has shed new light on his father’s former vocation.

In his new book “Orca: How We Came to Know and Love the Ocean’s Greatest Predator” (Oxford University Press, June 2018), Colby documents the era when live orcas were captured in the Pacific Northwest. During the 20th century, thousands of orcas were killed by fishermen and scientists around the world, and beginning in the 1960s, dozens in the Northwest were sold into captivity, decimating the local orca population. 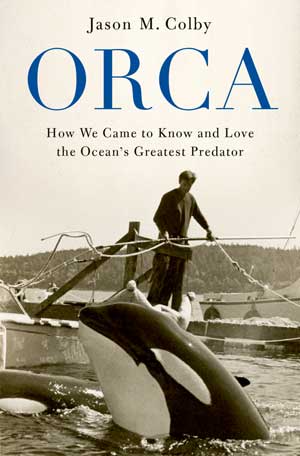 Purchase the book from Amazon

During the 1970s, his father, John Colby, was curator of Sealand of the Pacific, a small oceanarium near Victoria, British Columbia, and later worked at the Seattle Marine Aquarium and Seaworld. “He helped capture killer whales for sale and display — or, as he darkly joked, ‘for fun and profit,’” Colby wrote in the book.

But rather than focusing on the evils of captivity and profiting off animal suffering, Colby’s book posits that their capture may have inadvertently led to their salvation. Orcas performing in Seattle and Vancouver, as well as at SeaWorld, helped to transform whale research and to generate public affection for the animals once referred to as “killer” whales.

“It’s a story about how people change and the quirkiness of people,” he said. “If you look at all the problems today, they’re ultimately human problems. You can’t really understand them or change them without understanding people.”

Now an associate professor of history at the University of Victoria, Colby majored in history at Whitman. He said his professors made him realize how fascinating people are and why they make the decisions they do.

“I found that my future was really as a student of people,” he said. “Taking those history classes really opened my eyes to that.”

That realization included making sense of his own family history and his father’s deep regret about his role in the orca trade, Colby said.

“I wouldn’t say I’m trying to celebrate or even apologize for the role that he and others played, so much as contextualize it and help us understand how we got here.”

Colby said there were moments when he broke down crying as he was writing. He said it gives the book a heart that he may never find again because it was so personal and painful to write.

The current state of the southern resident orcas in the Salish Sea is dire, he said. The population recovered to nearly 100 whales from the live capture era, but in the 20 years since then they’ve crashed — the current population is 76 — due to starvation from a lack of Chinook salmon, their primary food source, and the toxicity of the water from human activity.

“There’s lots of short-term and long-term solutions here,” he said. “But obviously you’re looking at a population that, because of choices we’ve made, or the hard choices we haven’t made, are headed toward extinction.”

One possibility is to stop trying to rescue or rehabilitate any more orcas — to let nature take its course. To which Colby responds, “Where exactly is nature now? We have de-natured profoundly the Salish Sea and the ecosystem. So to remake it, to drain all the food, to poison it, to pollute it acoustically, and then say, ‘Let nature take its course,’ is an astonishing abdication of responsibility.”

Like her industrious subjects, filmmaker Sarah Koenigsberg ’02 knows that big projects are easier to build with help.

She produced her first feature-length documentary film, “The Beaver Believers,” with the help of the Whitman community.

She employed several students as paid interns through Whitman’s Environmental Studies Summer Internship Program, and they became an enthusiastic part of the production.

“We had to really work as a team,” Koenigsberg said, noting that filming the easily spooked animals in their natural habitat was a real challenge. “We had to learn to intuitively sense each other’s movements. It was a really cool little dance that we ended up working out.”

But there’s a reason why the film is not called “The Beavers,” she said. “It’s not just like a PBS or nature documentary just about the animal. It’s about the people. It’s about the beaver believers.”

The documentary focuses on activists who are trying to restore the American beaver to its former habitats and range. These advocates champion the beaver as a keystone species, that its near-demise at the hands of fur traders of yore — and land engineers of the last century — caused much of the American West to become arid land, and that returning the beaver to healthy population levels would restore ecosystems, creating the biodiversity, complexity and resiliency watersheds need to absorb the impacts of climate change.

Koenigsberg came to the subject of beavers and their ardent believers over several serendipitous years, during which time she met four women, each of whom was working in her own way with beavers as they relate to climate change and water preparedness.

“It’s usually old white dudes, and suddenly, it’s like, ‘What? There are these women presenting this different kind of paradigm of restoration. What’s going on here?’”

Equally serendipitous was the path she took to becoming a filmmaker. Like many young people, it took time to find her calling.

Arriving in Walla Walla from her hometown of Ashland, Oregon, Koenigsberg was intrigued as a first-year student by her introductory classes in environmental studies and geology, which exposed her to the issues of pollution and climate change. But her lightbulb moment happened during the Intro to Film class taught by film and media studies Professor Robert Sickels. 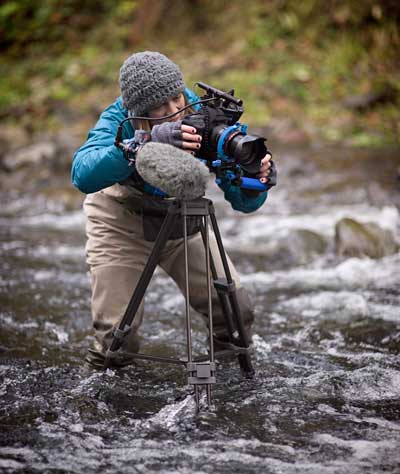 “He announced on day one that we were going to have to make a short film,” she said. “The first time I put some clips together in a timeline and saw what happens when clips go together with music, I just locked onto it.”

“My thesis work was very driven by my work with those two professors,” she said. “Thinking about why do we think humans have a place in nature, or that everything humans do is bad.”

“Being in the field, collecting stories of a community that had no voice in the world, but they were trying to have more sustainable agriculture to lead to better lives for their kids. It all just resonated,” Koenigsberg said.

She returned to Walla Walla in 2005 and started her own film company, Tensegrity Productions. Soon thereafter, Whitman politics Professor Philip Brick recruited her to create the curriculum and teach the media and storytelling component of Whitman’s Semester in the West program from 2008 to 2016.

The key to solving complex social and ecological issues, Koenigsberg said, is what she calls thinking like a beaver.

“It’s really the whole question of, how do we humans want to live on the planet? Are we living in a way where we feel like for us to get ahead we have to cut other things down? Or are we living in a way that really encourages and uplifts and assists everything around us? It might be better to listen to each other and work collaboratively toward a better future for all."