As chief veterinary officer at the Food and Agriculture Organization of the United Nations, Juan Lubroth ’79 subscribes to a view of medicine known as “one world, one health.” He stresses that human, animal and environmental health are all inextricably linked—something humans are not always good at remembering.

“The [perceived] differences between animal and human health—that division should not exist,” said the biology major, whose desire to become both a physician and a veterinarian prompted him to earn a doctor of veterinary medicine degree and a master’s in medical microbiology at the University of Georgia in 1985, followed by a Ph.D. in epidemiology and public health from Yale University School of Medicine in 1995. “We have to recognize that we are all terrestrial mammals on earth.”

Most new and emerging pathogens originate from wildlife, he explained; epidemics that endanger herds and livestock also threaten human health and safety. Understanding this threat and communicating it to world governments are major parts of Lubroth’s job, which takes him around the globe to meet with leaders on issues like the growing demand for animal products, along with greenhouse gas emissions and natural resource management.

“Food production is essential for human nutrition,” he continued. “When there is an outbreak of disease, it affects families, communities, trade. To tackle the problem before it grows is essential for people’s livelihoods and national economies.” 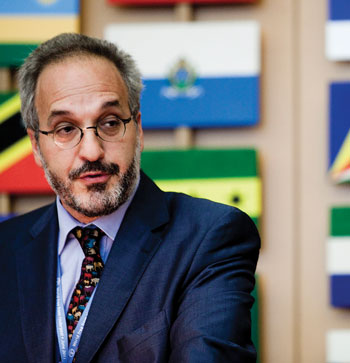 Talk of pandemics calls to mind recent crises like Zika or Ebola, both of which are considered zoonotic—that is, transmitted from other animals like mosquitoes and bats to humans. A rare success story comes in the form of rinderpest. A scourge on cattle, rinderpest caused countless famines throughout history. In 2011, it became the first nonhuman animal disease to be wiped off the face of the earth, thanks in part to Lubroth’s team, and the second ever to be eliminated, following smallpox in 1980.

in combating the disease through country-by-country vaccination campaigns. “But if the herd were to become infected, you could lose all your cattle in a matter of days.”

Two major outbreaks occurred in the early 20th century in Australia and Brazil, he added, referring to rinderpest as “a transboundary and transcontinental disease,” and “putting it back into Pandora’s box required a lot of effort over decades, if not centuries.”

The last known outbreak was in Kenya’s Meru National Park in 2001, after which “it took us 10 years to comb the countryside in all the places where rinderpest occurred, to be sure this virus was not lurking in some population of wildlife” or stray herd of cattle. Finally, the Global Rinderpest Eradication Programme, which Lubroth inherited when he assumed the role of chief veterinary officer in 2009, declared the disease eradicated.

“I can’t take credit for it—I stand on the shoulders of giants who did all the work before me. I cried when the World Organization for Animal Health announced it. It was a very moving moment.”

Lubroth’s globetrotting career is not a far cry from his upbringing. Born in Spain to first-generation American parents of Polish, Ukrainian and Russian descent, he claims Madrid as his hometown and resides about an hour and a half outside Rome, headquarters of the Food and Agriculture Organization (FAO). He and his relatives have lived all over Europe.

“I come from a family of artists,” he explained. “My father and mother both received Fulbright scholarships after World War II—my father to Paris and my mother to Vienna—and they have stayed in Europe ever since.” Lubroth “grew up in a house with a garden and animals. My mother was a painter/teacher, my father an architect, my brother and sister architects, my other brother a photographer. Even my son became an architect. I’m the only one that went into science and biology.”

Lubroth decided at age 11 that he wanted to work with animals after visiting a local vet with his father and then working there cleaning cages. He and his siblings attended school at a NATO Air Base outside Madrid; his mother’s position as art teacher secured free tuition. There, he also developed an abiding interest in human rights.

“I became more exposed to politics and social unrest,” he said. “I became interested in the social aspects of communities and politics, and more aware of the ‘haves’ and the ‘have-nots.’”

A high school counselor who hailed from Washington recommended Lubroth apply to Whitman.

Rigorous academics greeted him upon arrival. “I wasn’t the most stellar student—I did okay,” he said. “My grades were always lower in fall than spring because I played soccer. My weakest subject was chemistry. I studied very hard and, at times, it didn’t always pay off with my grades. Whitman was a very demanding environment that I wasn’t used to coming from Spain, where [school] was a breeze.”

Lubroth sought refuge in the camaraderie of the soccer field. It helped that the team was “a very international group, perhaps more so than the other sports because of the nature of the game.”

“Juan had a great sense of humor and always worked diligently and successfully in his courses while at the same time being a superb varsity soccer player. He was always easily spotted on campus as the one wearing the beret.”

Drabek recalls one instance in which Lubroth, having expressed an interest in bats, accompanied him to Pioneer Park at night to net one.

“Juan then carefully dissected, mounted and labeled the skeleton of the forelimbs in a way that elegantly showed how the bat’s elongated finger bones function as wings,” he said. “Juan developed his own wings upon leaving Whitman” and “has contributed greatly to identifying and controlling international public health challenges.” 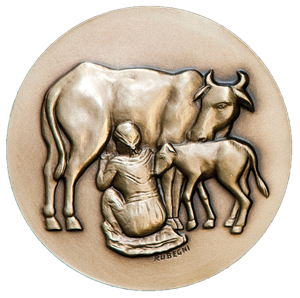 After graduating from Whitman, and then from the University of Georgia, Lubroth worked as a wildlife veterinarian. He joined the diagnostic services section of the U.S. Department of Agriculture’s Foreign Animal Disease Diagnostic Laboratory, Plum Island Animal Disease Center in New York and was later stationed in Mexico for three years as part of a bilateral commission for the prevention of foot-and-mouth disease, among other maladies.

In 2002, Lubroth became the head of the Animal Health Service division of the FAO, charged with curtailing the spread of infectious diseases. This post led to his current position as chief veterinary officer.

“No one day is the same,” he said. “There are no routines” because of the many pressing issues worldwide. “We talk about animal diseases and develop strategies at the country, regional or global levels to make sure outbreaks don’t become epidemics.”

He explained that “one of the biggest challenges is conveying the importance of animal health to human health.” This lack of understanding can cause countries to underfund animal health infrastructure, a frustration for Lubroth.

“Veterinary systems around the world are still quite weak,” he said. “The investment into bio-security or hygiene at the primary production farms—whether backyard or even commercial—is weak. I want to say it’s a time bomb but [it’s] happening with more frequency [and we’re] seeing more outbreaks.”

Lubroth also supports the humanitarian side of relief efforts, particularly during flooding or drought, to “preserve people’s livelihoods and their assets of livestock.” He added, “FAO participates along with 12 other agencies on the response mission.”

In February, a Reuters article titled “Asia’s Hunger for Meat Could Stoke Diseases If Unregulated, Warns U.N.” quoted Lubroth. He cautioned that outbreaks of deadly diseases like SARS and avian influenza will increase unless governments strengthen regulations. “We will see more diseases and we will see more epidemics, starting tomorrow,” he predicted in the news story.

Along with sounding the alarm on unsafe farming conditions, the FAO fights poverty and hunger through sustainable food production. Many initiatives have contributed—directly or indirectly—to the U.N.’s Millennium Development Goals, aimed at improving living standards for people from all corners of the planet, among other objectives.

“Ensuring that we are producing food in the most sustainable way and ensuring consumer protection and food safety are paramount to our efforts,” Lubroth said. “And animal diseases cripple efficiencies in food production.”

“As countries become wealthier, they want more animal-sourced foods in their diets,” explained Lubroth. “In Africa, it’s happening slowly but it’s happening. As individuals become wealthier, they want more animal products. In meeting this demand, we could damage the environment even more. So having the proper policies in place is important. [How much is] too much meat? Milk? Eggs? How much animal-sourced food should we eat?”

Supporting balanced nutrition is one way to send the message that moderating diets may be the best way forward, even if humans likely won’t stop eating animal products.

“Humans are omnivores. I realize being vegan is a choice, but as primates we are omnivores,” Lubroth continued. “Meat, eggs and milk do carry some quality proteins, micro-nutrients and vitamins that you don’t get from crop-based diets in the same quantity, but too much of a good thing is bad. Non-communicable diseases are on the rise because of overeating animal-sourced foods.” 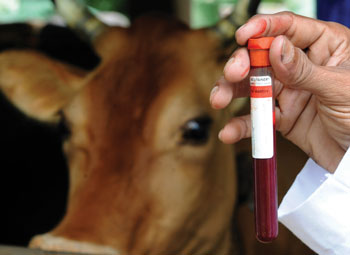 Although Lubroth recognizes the value of his high-level strategic work at the FAO, the relentless schedule leaves little time for the hands-on aspects of his job that he once enjoyed.

“I only stay in any country for a maximum of three days,” he said. “Typically, I’m meeting at a ministry. I don’t do the fieldwork that I used to love so much, like going down to Brazil for a month or to work in the Caribbean for three months. I’m not able to spend time with the people, the communities, the culture.”

Instead, “it’s a lot of [meetings] with the decision-makers, the planners. That’s where I will get engagement to strengthen health systems as a whole. But I miss that aspect of being with people and their animals.”

Still, Lubroth has worked tirelessly for decades to improve biological safety metrics throughout Latin America, North Africa and the Near East, acting as the driving force behind major projects like the Global Framework for the Progressive Control of Transboundary Animal Diseases, the Global Early Warning and Response System for Transboundary Animal Diseases, the Crisis Management Centre’s Animal Health division and the Advisory Committee of the Pan-African Programme for the Control of Epizootics.

“As a vet, I really want to address the importance of early detection at the animal source, before we get the spillover into humans as we saw with Ebola in West Africa,” he said. “I’m invited to participate at conferences and seminars on climate change and how it will affect the footprint of diseases and pathogens [such as] Zika and West Nile. With climate change, there are different footprints of disease moving around the world.”

When educating his peers on complex global issues like these, Lubroth has an advantage: his unique perspective as a vet who earned his doctorate at a human medical school.

“I feel very comfortable speaking on the connection between human health and animal health,” he said.

That brings him back to the principle of “one world, one health,” or the idea that our shared ecosystem calls for a combined approach to human and animal welfare that doesn’t hurt the planet.

“Living in a healthy environment makes us all healthy, so we have to be good stewards of the environment.”

Jen Jones Donatelli contributed reporting to this story. A freelance writer in Los Angeles, California, she has written for REDBOOK, Variety and Natural Health, among other major outlets, and earned a bachelor’s degree in journalism from Ohio University in 1998.