In a way, the best thing to happen to Bao-Tram Do '13 at Whitman College was almost dropping out.

The sociology major not only surmounted first-semester problems to excel in academics, civics and outreach. She also built on this mettle and grounding gained at Whitman in her burgeoning career—and garnered a Kicking up Our Heels Award in March from the Center for Women & Democracy at the Washington State Governor's Mansion for her community leadership and work as associate officer for community programs at the Seattle Foundation.

Do "promotes racial and economic equity through grantmaking to immigrant[s] and refugees and communities of color," according to the Seattle Foundation, a community philanthropy organization that Do joined upon her graduation from Whitman. And at Whitman and elsewhere, she has empowered girls and women through civic and community engagement and has otherwise encouraged political participation for marginalized communities.

That's why judges recognized her at the 15th annual Kicking up Our Heels Awards alongside Washington first lady Trudi Inslee, among others. The event celebrates women in state administrative, judiciary and legislative office as well as those "making great strides to advance other women in the state," press materials explain. Festivities occurred on International Women's Day. 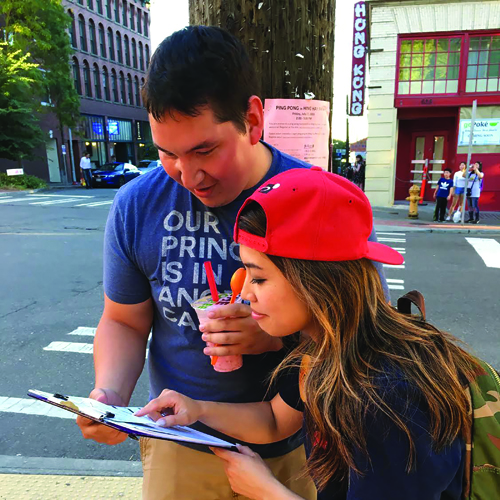 The context hits home for Do. She arrived in the United States as a refugee at age 3, her family fleeing Vietnam to escape political persecution. Because she had spent time in high school traveling to Northern India to live with Tibetan refugees and learn about the conflict between China and Tibet through a scholarship from a national youth development program, Do signed up her first semester at Whitman for a 400-level Chinese politics class and an international politics class—a plan she now considers overly ambitious.

"I didn't really know many people who had gone to college," said the first-generation college student from a family of six, and so she lacked a sense of what that path entailed. "Even though I had taken honors classes in high school, college is a whole new ballpark. While adjusting to new social, cultural and academic challenges, I failed both politics classes."

And she got nervous. As a recipient of a Gates Millennium Scholarship—given to high-potential students from underrepresented backgrounds—she knew that academic probation jeopardized her college career.

"I was really worried," she said. "The fear was that after all the effort I'd put in to get here, I would have to just go home." Do contacted Associate Dean of Students Juli Dunn and made the decision to dig in and dig herself out.

"I guess I'll just have to exercise my muscles of academic resiliency," she remembered telling Dunn. "I'm going to tap into the skills I have as a refugee—to navigate these foreign environments and be resourceful."

"And that is exactly what she did," said Dunn. "She spent the next seven semesters not only developing and then flexing her muscles of academic resiliency, but also modeling for her peers what academic fortitude looked like, finishing her senior year with academic distinction—and being civically engaged in the Walla Walla Valley and serving as a mentor to younger Gates Millennium students."

Do took advantage of office hours and academic resources. She found her niche in sociology, analyzing how race, class and gender dictate opportunity. Her academics turned around. Do was active on campus and became co-president of the Black Student Union. During the summer of her junior year, as part of a work-study internship at a community health clinic, Do registered people to vote.

She brought that initiative back to Whitman. Although a couple of campus groups affiliated with a particular political party expressed interest in voter registration, there was no push to get students registered in a neutral way. Within two weeks, Do recruited peers and organized a voter registration campaign that registered more than 100 students—and she "started to realize I was good at community organizing and getting people together to work on an issue." She followed that thread through the rest of her studies and beyond, "understanding the importance of who represents communities and their power to come up with policies and different laws—how these policies impact everyone from students to immigrant refugees to women."

"Bao-Tram exemplifies the ideas of resiliency, grit, fortitude and initiative," Dunn said. "Her response to my opening question: ‘What will be different in the spring?' was answered with such courage, determination and grace that I realized I was sitting in the presence of a growth mindset personified."

In fact, when Whitman hosted a panel entitled Grit to Great: Developing, Building and Maintaining Resiliency in February 2016, Dunn put Do at the top of the list of alumni to invite to speak alongside faculty and staff. "Bao-Tram shared her story with current students and inspired many in attendance to reach beyond their own self-limits," Dunn said.

"I shared the importance of developing grit," Do recalled, "while highlighting the need to address institutional barriers that place certain communities at a disadvantage."

Much of Do's work for the Seattle Foundation involves community organizing and helping make philanthropic investments with an eye toward the impact on immigrant refugees and grassroots initiatives. For example, she staffs programs such as Neighbor to Neighbor, which supports community-led grassroots groups to address racial and economic inequities, and Vibrant Democracy, which invests in efforts to increase the civic voice and representation of underrepresented groups. One of these organizations includes a group of Muslims in South King County who share meals and conversation with community members in an effort to reduce Islamophobia.

In addition, Do is on the board of APACEvotes, which fosters civic engagement among Asian Pacific Islander Americans. She has completed the Center for Women & Democracy's Leadership Institute. And Do serves on the steering committee for the Seattle City Club's 2017 Civic Health Index.

"Sociology is the best possible thing I could have majored in," she said. "Besides providing students with the ability to build their equality analyses, the field teaches students institutional and systems thinking. Helpful when you're trying to dismantle systems of oppression."

Her undergraduate experience also "helped me develop my abilities to think critically, to view issues in context and form multiple perspectives, to ask and address questions about societal complications and communicate complicated issues clearly," she said in a 2012 interview in this magazine.

Do further credits her many Whitman mentors. She also appreciates participating in a Whitman program for prospective students and being inspired by her future classmates; later, she became a host student, especially to women of color. Other uplifting examples for Do include the students who created Whitman's annual Power and Privilege Symposium. 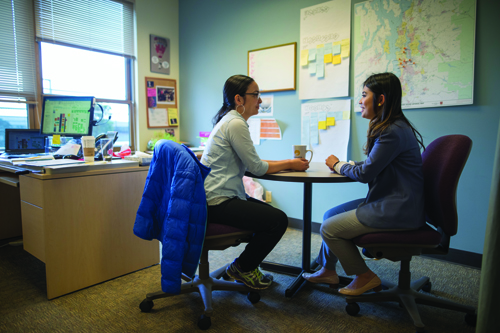 Such insights make Professor of Sociology Michelle Janning proud. "One of the most rewarding parts of teaching sociology is to watch students realize that their individual story is made richer when they understand the larger context in which that story is taking place," she said.

"From her first paper in Principles of Sociology to her senior thesis, Bao-Tram wove together her story with a deep understanding of structural and cultural contexts that impacted her life and her decisions," Janning continued. "That she is being honored in this way is wonderful, because it shows that she is taking her own story, and her ability to see how stories connect to social context, and impacting people's ability to have their own voices heard."

By the time Do started at Whitman, she had experienced such issues more than many young women her age. As a sophomore in high school, she won a scholarship at a national youth involvement program called Summer Search, which mentors students from low-income backgrounds; a long-term investment, it continues through college and beyond, stressing perseverance, altruism and education. Through the program, she traveled to far-flung places in the United States and to Northern India, learning about unfamiliar environments, different cultures and socioeconomic diversity.

"I consider Eliza one of my biggest mentors," Do said. "Eliza was one of the few role models I had while in high school who went to college and helped me navigate the process of applying. Eliza inspired me to go to Whitman."

Carrington also nominated Do for the Gates Millennium Scholarship, which funded her education at Whitman and will pay for future relevant studies, if she pursues them. Do "exudes intentionality, loyalty and resilience," said Carrington, who majored in biology.

The two women grew up in the same neighborhood in South Seattle. "All of her work with the Seattle Foundation, APACEvotes and Summer Search stems from her deep love of her roots," Carrington said. "Her home and community are meaningful to her. I think that's why we bonded."

Carrington and Do often run into each other on their daily commutes, catching up on the town hall talks, book readings, rallies and community meetings that Do organizes.

"I am proud of this woman beyond comprehension," said Carrington.

Likewise, Summer Search and Carrington are so important to Do that once she returned to the Seattle area after Whitman, she joined Summer Search's Seattle board of directors—the first local alumna to do so.

Although nonpartisan in her work, Do noted that the current political climate frightens many people. Still, she finds a silver lining in the general upswing in civic interest in public institutions.

"People have diverse opinions about politics, but lately there has been an increased interest in people getting more involved. There's been a huge opportunity to reenergize folks. To build more of that social bonding capital. To rebuild civil society."

Do added: "I'm really interested in the intersections between nonprofits, the government and business. I'm interested in continuing to grow as a multifaceted leader."

That's exactly as it should be, said Gilbert Mireles, associate professor and sociology chair, and Do's adviser at Whitman. "Bao-Tram exemplifies the best of the immigrant experience in this country. From an early age, she had the ability to make the most of the limited resources available to her and to seek out new resources. Being chosen a Gates Millennium Scholar in high school is testament to her ability to overachieve in a circumscribed context. When Bao-Tram arrived at Whitman, she was the first person in her family to attend college. The experience was not without its challenges, yet Bao-Tram was determined to persevere. She has excelled at college and beyond, consistently demonstrating resiliency and the ability to overcome challenging obstacles."

As Do puts it, "My work goes with the theme of making politics accessible."