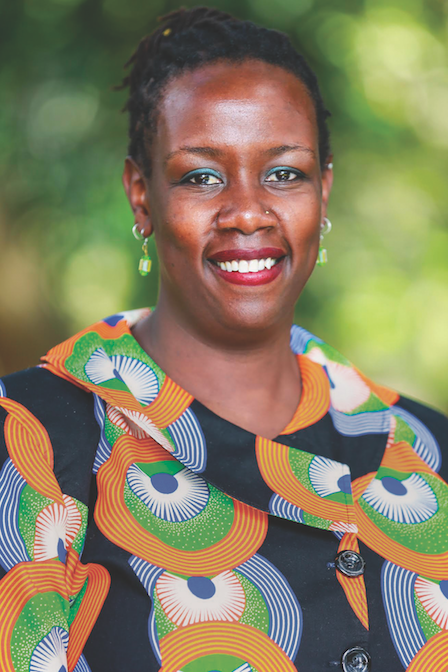 "At Akili Dada we deal in miracles and dreams," wrote social activist and entrepreneur Wanjiru Kamau-Rutenberg '01 on the White House blog when chosen as a Champion of Change in 2012 for founding a leadership incubator that provides
scholarships and mentors for high-achieving young Kenyan women from under-resourced families. Founded in 2005, "We exist to make the impossible possible in a world that doesn't believe that African women can."

The Kenyan native, who majored in politics at Whitman, did more than deliver Whitman's commencement address on May 21. She also witnessed Akili Dada scholar Faith Nyakundi '17 walk the stage to receive her own degree in politics.

"Whatever Wanjiru does, she tries to open a door for someone else," Nyakundi said before the event.

Today, Kamau-Rutenberg directs African Women in Agricultural Research and Development, an organization that invests in African women scientists, research institutions and agribusiness. Since 2008, the program has trained more than 1,450 researchers, empowered more than 1,150 scientists and engaged more than 325 institutions, according to its website as of press deadline.

"Wanjiru embodies many of the values of our own students," said Whitman President Kathleen Murray. "Her career shows that there are endless possibilities for our graduates to positively impact the world."

Other recognition for Kamau-Rutenberg includes being featured in the summer 2016 edition of this magazine and receiving the Pete Reid Award for Young Alumni in 2009. New African magazine named her one of the 100 Most Influential Africans and the Ford Foundation deemed her a Champion of Democracy. Kamau-Rutenberg also garnered the United Nations Intercultural Innovation Award and made the list of Kenya's Top 40 Women Under 40.

Kamau-Rutenberg, who earned a master's degree and a doctorate in political science from the University of Minnesota, credits Whitman for preparing her well.

Kamau-Rutenberg was "overwhelmed by the honor to speak at commencement" and "very excited to return ‘home' to Whitman and to engage our thoughtful and committed community in conversations about the challenges and opportunities that we all, but especially the class of 2017, face as we work to build a more just, inclusive and sustainable world."