In a historic discovery, the LIGO Project recently detected Einsteinian gravitational waves. Whitman Magazine talked to Assistant Professor of Physics Greg Ogin, who was involved with the research, to find out exactly what that means.

This February, newspaper headlines around the world proclaimed it one of the biggest discoveries in physics for decades: the first observation of gravitational waves—ripples in the fabric of spacetime.

The discovery was made by the LIGO Project, based jointly at the Hanford Site near Richland, Washington, and in Livingston, Louisiana. Since 2006, Assistant Professor of Physics Greg Ogin has been a member of the LIGO Scientific Collaboration, a group of more than a thousand scientists, engineers, students and institutes of higher education all guiding the science taking place there.

"This is exciting for so many reasons," said Ogin, who woke up at 3:30 a.m. the day of the historic announcement. "It opens up an entirely new field of gravitational-wave astronomy, with a radically new way of learning about what's out there in the cosmos, as well as really exciting prospects of testing Einstein's theory of gravity in the future."

So what exactly did LIGO discover?

On September 14, 2015 at 9:51 UTC (2:51 a.m. Pacific Time), two Laser Interferometer Gravitational-wave Observatory (or LIGO) detectors—one at Hanford and the other more than 2,000 miles away in Louisiana—detected a signal that registered as a faint chirping.

After months of working to confirm their findings, LIGO announced that the signal was the result of gravitational waves produced during the final fraction of a second of the merger of two black holes. This merger more than 1.3 billion light years away, would have produced a single, massive, spinning black hole 60 times the size of the sun, as outlined below.

This collision of two black holes opens an unprecedented new window onto the cosmos and a groundbreaking new way to observe the universe without electromagnetic radiation.

As Ogin put it, "we're now going to be able to start studying black holes as they interact with each other, which opens up entirely new realms of strong field gravity that we couldn't imagine working with here on Earth." 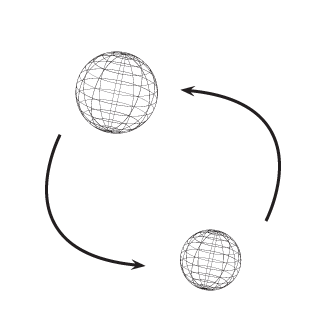 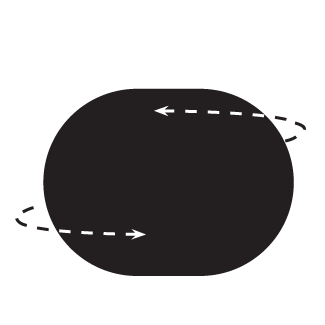 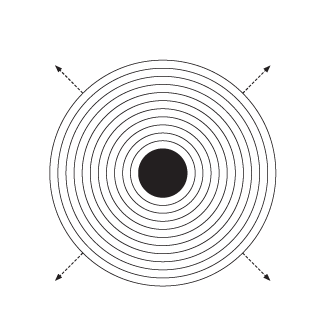 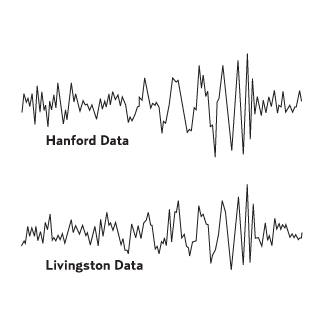 According to Frederick Raab, head of LIGO Hanford, "this is one of the most profound moments in history, like the invention of the telescope or the microscope. Unlike those examples, which enhanced a sense of vision we already had, gravitational wave detectors use an entirely different phenomenon to bring us an entirely new sense."

Each LIGO interferometer (see the diagram at the bottom of this article) consists of an enormous L-shaped vacuum chamber 4 kilometers in total length and containing two sets of mirrors and a laser beam. The laser is split into two before running down both halves of the chamber. At the end of each half of the L, a mirror reflects each laser beams back down the same path, and they end by recombining, or "interfering," on a sensor.

A signal is produced when the lasers are moved on a miniscule scale—at something like 10-19 meters, or one ten-thousandth the diameter of a proton. Isolated from all other forces, most of the time, they barely move at all. But when a gravitational wave passes through the interferometer, the lengths of each cavity change a tiny bit and the lasers move very slightly out of phase. The sensor then detects a small but measurable signal; a signal from a gravitational wave. 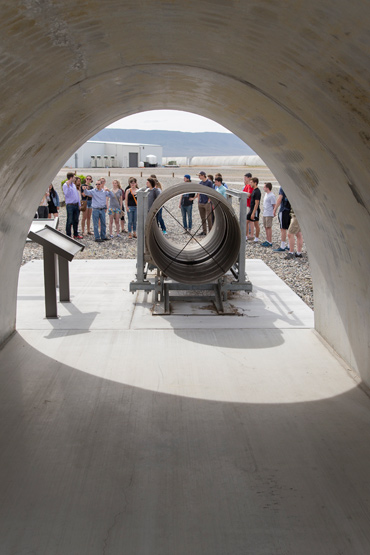 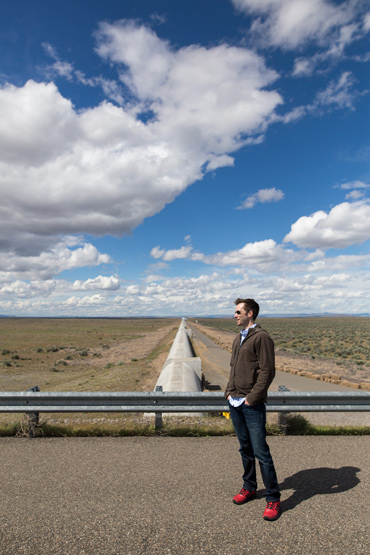 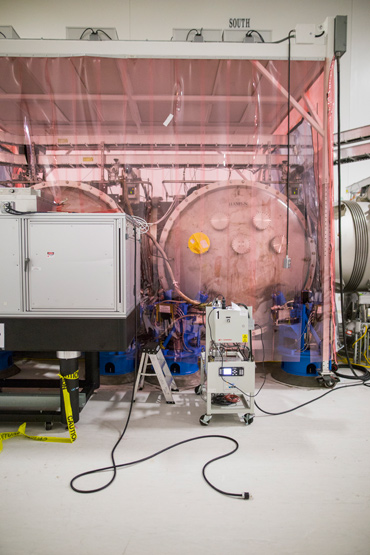 Left to right: Three physics classes visit LIGO Hanford, just over an hour away from campus. Greg Ogin stands above one of the LIGO beam tubes. Inside LIGO, the vacuum chamber that contains the photo sensor.

Ogin (pictured above center) first became involved with the LIGO project 10 years ago, when he was a graduate student at the California Institute of Technology. At Whitman, he has continued his research into the science of precision measurement, specifically studying the high quality mirror coatings used in experiments like LIGO, and frequently involving physics majors as student researchers.

"There are a lot of ways I work my research into student education here at Whitman," he explained. "I tend to have two or three students who work with me over the summer, setting up my lab and actually taking these measurements of very tiny little displacements using lasers.

While he works examples from LIGO into many of his classes, in particular his Optics and Advanced Lab courses, "there are also things like pendulums and masses on springs that show up in intro-level courses."

His work helps LIGO to better understand noise in its laser interferometers, so that they can measure even more accurately and on an even more miniscule scale. (Much of the art of laser interferometry is in refining the equipment in order to reduce the impact of outside sources that can give the false impression of signals.)

"Part of my research that's just starting to pick up in the last few years is looking at the data that comes out of the Hanford detector and analyzing its quality," he said. "So we look at how often there are these weird blips and creaks, and we try to figure out what they are and how we can reduce them."

In a recent video (see above), Ogin used a simple analogy to describe just why gravitational waves occur.

Imagine, he suggested, that you have a rubber sheet stretched over a wooden frame. That is Einsteinian spacetime. Drop a steel ball onto the sheet, and it will sink, warping the sheet. Roll a marble across the sheet, and it will circle the warped part, because the sheet—spacetime—is curved. And if a big steel ball—a black hole—is jiggled, or if two black holes are racing around one another, you might expect ripples to appear in the sheet.

Those ripples in the fabric of spacetime are analogous to the ones that come out of Einstein's theory.

"The warpages of space and time during the last moments before the merger of the black holes were thousands of times greater than any ever witnessed by humans, and the theory described it accurately!" Raab explained. When the waves pass our planet, they cause movements on the tiny scale that LIGO can detect. By watching the mirrors at LIGO Hanford and Livingston, researchers can finally see these waves making their way past Earth. 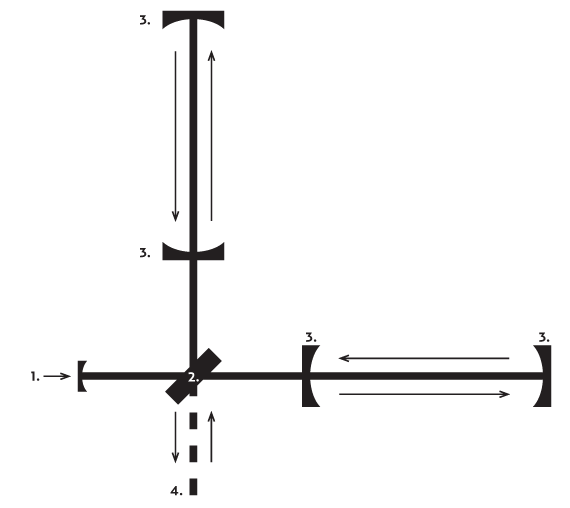 In the future, according to Raab, LIGO hopes to detect even more black hole mergers, as well as merging neutron stars, and to "explore the evolution of the universe and answer questions of how it and we came to be what we are today."

For Ogin, involving students in the research process is an integral part of his teaching methodology. Greg Holdman '16, a physics and mathematics major, is one of those students. "Working with Professor Ogin was a great learning experience because he gave me the chance to take my own approach to physics research. As a new physics student, this was very important to my development."

LIGO's big announcement ended a months-long embargo as scientists verified their discovery, accounting for any possible interference or "noise" in their data readings— the blips and creaks Ogin mentioned.

During a talk on campus on the day of the announcement, audience members asked Ogin whether this revelation was on par with the discovery of the Higgs boson or "God particle." Yes, he said, but added, "I might be biased."

Holdman, who plans to attend graduate school for physics next year, said, "I often stop to think about how much humanity has learned about the universe just by looking at it with light. To think we can now look at it with gravitational waves is almost like inventing the telescope all over again." 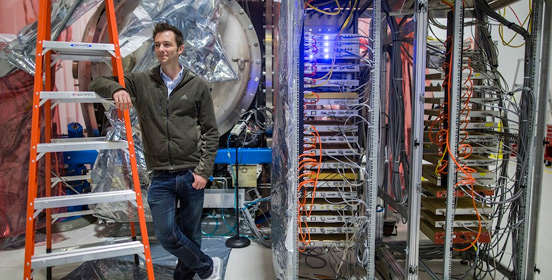 Whitman College Professor Greg Ogin has been involved in this groundbreaking research for the past ten years.