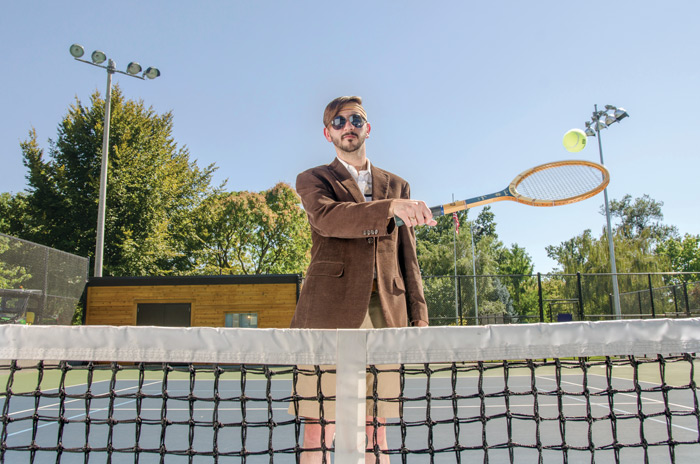 Jeff Northam, John Hein and Greg Patton have worked with pro tennis players like Pete Sampras, Michael Chang and Jim Courier. I can count the number of times I’ve played tennis on one hand. So covering Whitman’s Tennis and Wine Camp seemed like at least half of a good idea.

It’s August. At the Bratton Tennis Center, around 20 people are gathered on Whitman’s indoor courts, their names written on stickers pasted to their polo shirts. They’ve come from across the Pacific Northwest, from Hawaii and South Dakota, to take part in a four-day summer camp for adults: tennis in the mornings, wine tasting in the afternoons and winemaker dinners each evening.

When I arrive, I’m unsure what to expect. Whitman’s Head Women’s Tennis Coach John Hein leads me down to the courts where Jeff Northam ’88, the men’s tennis coach, is waiting. In my collared shirt, jeans and boots, I’m a little out of place. (I’ll go home and change after the introductions, I tell them.)

“Hydrate, hydrate, hydrate!” Tom Sawatzki says. In a circle around one of four courts, campers are receiving their first piece of advice.

Sawatzki is a local. An avid tennis player, he also happens to be a partner in Seven Hills—one of the original five wineries in Walla Walla. He helped Northam get this show on the road and has guest-coached at the camps since they began in 2010.

“Wine hydrates too, right?” asks a fellow camper, eager already for their evening libations. I sympathize.

Sawatzki introduces Northam and Hein before moving onto guest coaches Tom Fey—director of the Indian Wells Tennis Garden—and Greg Patton. Patton, who coached with Northam at Boise State, has led many, many tennis players to national victories. “All that means is that you’re really old,” he says.

But his self-deprecation doesn’t last long. Greg is tall, tan and confident on the court, more garrulous than Jeff and John.

“I’m not going to spend a lot of time explaining stuff,” Greg says, before going on to explain that good tennis is not about power—it’s about making balls and keeping a soft, loose grip on your racket.

Campers are split into four groups by skill level, each group assigned to one court. Greg christens the courts, from top to bottom: the penthouse, the townhouse, the doghouse and the outhouse. As an avid indoorsman with little knowledge of sports other than snooker, it’s obvious which court I’ll be on.

After donning the most tennis-appropriate outfit I own (shorts; a winery T-shirt; 10-year-old sneakers), I join my outhouse compatriots courtside. Beth Babington, Libby Feller and Julie Fulton from Washington and Eric Andersen from South Dakota are all in the midst of passing exercises, their jellyfish grips aspiring to Wimbledon.

Later, during a hydration break, Eric tells me: “I’d never picked a racket up until eight months ago.” I tell him that he’s still up on me.

The racket I pick up is on loan from Northam. I spend a couple of hours making some balls and missing many more. My outhouse family is improving exponentially already, while I’m lagging behind.

“I’m here to learn and have a good time,” Eric says, simply. “The nice thing is, if you have public courts, it’s inexpensive: buy a racket, buy some balls, and you’re on.”

Eric is here with Cheryl Otto, another South Dakotan. They grew up in Yankton, just 30 minutes from Mt. Rushmore. It’s his first time in Walla Walla, and they’re planning to join other camper-acquaintances in Seattle in a few days time.

For half of my time on court, Jeff Northam and Tom Sawatzki coach the outhouse, while Jeff eventually switches courts with Tom Fey, whose coaching style is abrupt but drily humorous.

Thanks to the fantastic coaching, everyone improves over several hours. Eric in particular makes more balls with each play, and at the end of our court time, he is the last man standing in a knockout exercise where players switch off court time and are eliminated when we miss a shot. Eric wins a racket dampener for his troubles.

At Walla Walla Community College, Winemaker and Enology Instructor Tim Donahue provides a pre-dinner introduction to College Cellars, the winemaking arm of the school, which grows 24 varietals and currently has 25,000 bottles in barrel.

I sip a decidedly un-oaky chardonnay while Tim describes the three main types of students in their winemaking program: high school graduates looking for entry-level positions; the “professional” crowd who want to expand their winemaking horizons; and the 55- to 75-year-olds on their second (or third, or fourth) careers. On average, they welcome two Whitman graduates each year.

Emerging from the college’s wine cellar to the rooms above, Whitman Professor of Geology Kevin Pogue awaits, poised to give a talk about terroir and the geology of winemaking in the Walla Walla Valley.

Kevin knows more about terroir than anyone should. Which is why he was asked to star in a short film, Searching for Value, made by two Danish filmmakers who read a piece in The New York Times on his wine consulting work. In it, Kevin tastes wine, checks field research and talks about terroir as “somewhereness.”

We all enjoy watching Kevin watch himself on screen, but the rest of the talk is even more fascinating. Walla Walla’s latitude lies in between Bordeaux and Burgundy, he points out. And the new American Viticultural Area that he helped petition to create—The Rocks in Milton-Freewater, Oregon—produced two wines scoring 98 points in Wine Spectator in 2013.

Dinner is served in the next room, where the campers sit at two long tables. I sit between Cheryl Otto and Vince and Wendy La Cava. From Bellevue, Washington, the La Cavas are second-time campers and the parents of Andrew La Cava ’14, who was a tennis player and an Academic All-American.

Cheryl is looking forward to the wines. Eric says, “For me it’s more about the tennis. I’m more of a beer drinker.”

Paige Packman is here with her husband. Paige relaxes during the day and joins only for the wine. Before today, I realize I would have envied the wine-only camp option; but (in spite of my skill-level) this morning’s tennis was just as enjoyable.

Chef Dan Thiessen introduces each course, ranging from fennel soup and smoked pork belly to duck breast and medallion of rib-eye, while Tim Donahue talks wines, starting with a viognier and moving to carmenère and syrah.

Each dish is delicious, each wine complementary. The next few days, they’ll taste and eat well at wineries like Northstar and Pepperbridge.

And though it may just be the dessert wine, as everyone chats about hitting the court tomorrow morning, I start to wonder if I could stay at camp just one more day.

For more information go to tennisandwinecamps.com