A Korean-American and a Jewish-American meet at a dinner party, get married and have children. A recipe for disaster? 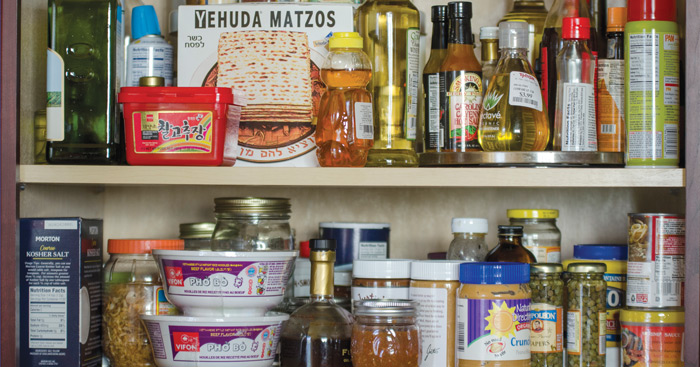 On a typical ice-cold, Chicago evening in February 1997, I was making dessert at my friend Ben’s house. Ben and I were both graduate students in the same M.A. program at the University of Chicago, and he along with his housemates decided to throw a dinner party for other members of our cohort as a respite from the intensity and loneliness of our studies. Guests started to trickle in. One stranger, Noah Leavitt, walked into the kitchen while I was putting the final touches on my chocolate masterpiece, and made a snarky and flippant comment to me that turned me off to any of his subsequent attempts to make conversation over the course of the evening. I ignored and avoided Noah for the rest of the evening, save for a curt goodbye when we all parted ways. I assumed that since I had never run into Noah before that night that I would probably never see him again, and that resolution suited me just fine.

Yet, Noah was (and still is) persistent. His tenacity paid off when I eventually went out with him for dinner and drinks. Quite unexpectedly, I bonded with Noah over the recent and sudden deaths of our fathers whom we adored and missed terribly. In that moment, we were not drawn to each other because of our respective racial, ethnic or religious backgrounds—Noah is Jewish. I am Korean. Rather, we were two individuals who felt connected and heartened by the possibility of comfort and friendship in the wake of personal tragedy and heartache from the loss of our fathers. Little did we know that we would fall in love with each other, become each other’s best friend, see each other through additional intense work, educational, and personal experiences and contemplate marriage.

I also had no idea that my relationship with Noah would spark my current scholarly interests. When I started as an assistant professor at Whitman College in 2005, my research was heavily focused on a completely different area—racial and gender identity among second generation Asian American women. This topic was, indeed, guided by my own questions and struggles as the U.S.-born daughter of Korean immigrants to this country. However, while in the midst of thinking about and trying to carve out a long-term research agenda, I was also trying to understand my own relationship with Noah and the choices we were trying to make regarding marriage, community and impending parenthood. I was curious—how common are marriages among individuals like Noah, who is of Ashkenazi Jewish descent, and me? Do differences between partners along racial, ethnic or religious lines play a significant role in the everyday lives of intermarried couples? How do couples incorporate various aspects of their different backgrounds in their relationships and in their families?

Searching for answers to these questions, I happened to correspond with Gary Tobin, a longstanding demographer of the American Jewish population. We struck up an email conversation regarding the subject of intermarriage among American Jews and the racial and ethnic diversity of American Jewry, more generally. Both of us talked about how the vast and long-standing body of academic work on intermarriage among Jewish Americans has primarily focused on interfaith relationships between Jews and Christians but has largely ignored racial and ethnic differences in addition to religious difference other than Jewish/Christian among spouses. This absence was especially striking, given that the larger conversation on intermarriage in the U.S. has primarily focused on interracial and interethnic unions within the broader population and less so on religious difference.

These and subsequent conversations with Gary and his wife Dianne Tobin became the seeds of our on-going research about the subject of racial, ethnic and religious intermarriage among couples where one spouse is racially Asian of any ethnic or religious background and the other partner is Jewish of any racial or ethnic background. Contrary to previous studies on intermarriage among Jewish Americans that argue for the erosion of Judaism and Jewish identity, our work has demonstrated the opposite. The married couples Noah and I have interviewed largely support the inclusion of Judaism in addition to Asian ethnic and cultural practices within their marriages and their homes. These practices are vast, ranging from religious education, language immersion, celebration of cultural holidays and incorporation of particular foods in the home. We have also found that there is very little conflict surrounding partners’ religious, ethnic and racial differences. Tales of being rejected by family members or disagreement rooted in divergent backgrounds are few and far between.

I would be naïve to believe that all is simple in the world of racial, ethnic and religious intermarriage. Fast forward from Chicago in 1997 to Walla Walla, Washington, in 2015. Noah and I are now parents to Aryeh Zakkai (age six) and Talia Shalom (age three) Kim-Leavitt. Life with two vibrant, bright, unceasingly curious and, at times, argumentative children is always rich and never boring. Ari and Talia are both at ages when questions about identity are frequently at the forefront of their minds and imagination. Who am I? Who is my family? What am I? How do I know who I am and where do I belong? How does what I look like connect to where I come from?

These questions are ones that we, as parents, cannot help but view through the lenses of race, ethnicity and religion. Here is a typical logic sequence from our six-year-old:

“Daddy is Jewish and Mommy is Korean,” says Ari.

With a somewhat visceral internal reaction, I reply as calmly as possible, “Ari, someone can be Korean and Jewish at the same time.”

Ari quickly counters, “No, they can’t. You are Korean and your parents aren’t Jewish so you can’t be Jewish.”

Turns out that raising Ari and Talia with a strong and nuanced sense of identity is not so simple as having kimchi in our refrigerator and challah on Friday nights.

Our children also keep others guessing who and what they are. Every year, I teach a sociology course on race and ethnic relations. During the second class of the term, I open the discussion to the often, uncomfortable topic of race. I start the session by asking students to tell me what race I am. Year after year, there is awkward and uncomfortable silence. And year after year, someone takes a chance and volunteers an answer, which moves us into the realm of uncomfortable conversation. Before the session ends, I show them current pictures of Ari and Talia without telling them that I am their mother and pose the question, “What race are these children?” Responses to these images are all across the board from “white” to “Asian” to “Latino” to “racially ambiguous” to “the human race,” thereby illustrating a central tenet of the course—that our understandings of race are to a great extent constructed by the society in which we live. These conceptions vary from person to person and across time and space. I then ask students how they would react if I told them that the children in front of them are Jewish. Overwhelmingly, they admit that they would be surprised to know this, given that their often unchallenged racialized understandings of whom they consider to be Jewish run counter to the physical images of our children right in front of their faces.

Based on our most recent research on young adult children of Asian Jewish intermarriages, we have discovered that these kinds of reactions are not surprising. “What are you?” “Where are you from?” and “Funny—you don’t look Jewish!” “Oh, you mean you’re half Jewish!”

These questions and responses are typical in the lives of many of the adult children of intermarriage whom we have talked to over the past three years. Rather than shy away from these kinds of challenges to their identity and authenticity, our respondents have also talked about the opportunities to throw these queries on their head. Perhaps because of their own upbringings or perhaps because of the era we currently live in that recognizes and often embraces the possibility of choosing multiple identities, our participants turn right around and challenge these assumptions of Jewish identity as well as Asian identity. No, Moses was not from Poland or Russia and yes, you can be Jewish even if you are racially or ethnically Asian.

"Almighty God created the races white, black, yellow, malay and red, and he placed them on separate continents... The fact that he separated the races shows that he did not intend for the races to mix."

Relatedly, young adult children also have strong opinions and advice to give to parents raising children like them as well as peers with similar backgrounds. Our respondents have stressed the importance of learning about and celebrating all aspects of their backgrounds, even if they may sometimes contradict each other. “Explore both sides of it, try to figure out where you come from on both sides. Then realize how it comes together as your own identity,” said one of our respondents.

If it were only so simple.

Not long ago, Ari turned to me during pre-bedtime, hang-out time on the couch and said, “Mom, Chinese people look like this.” He then took his two index fingers, touched the outer ends of his eyes and turned his big, round brown eyes into ones that were barely visible. He did something that I have been dreading for the past seven years, a dread that I felt when Ari was in utero and something that I knew would happen.

To say I felt rage at seeing my son pulling a “slanty-eye” would be an understatement. I wanted to scream at the top of my lungs, express my anger at a whole list of historical and contemporary wrongs. But I knew that this was also the perfect opportunity to give Ari another glimpse into history, who he is descended from, what their experiences have been and what he can do to make sense of all of these ingredients. Rather than shout, “Don’t ever do that again!” or intellectualize his actions by talking about people like Vincent Chin or concepts such as Asians as forever foreigners or racialized ethnicity, I turned to Ari and said, “I remember when I was your age, kids looked at me and said the same thing and it really hurt my feelings.” Ari came back with, “But mom, you’re not Chinese. You’re Korean.” Tempering my impulse to give him an academic lecture on how and why Asians of many ethnic backgrounds tend to get lumped under the term “Chinese,” I responded, “You’re right. I am Korean, but when people pull their eyes like you did, it makes people who look like me feel like they aren’t as good as people who don’t look like me.”

Our talk ended in a tearful embrace with Ari apologizing. “I didn’t know that, Mommy. I’m really sorry I hurt your feelings.”