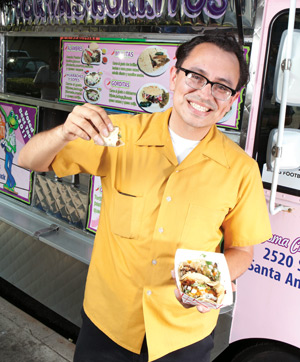 Editor of OC Weekly, writer of the syndicated column “¡Ask A Mexican!” and consulting producer of Fox’s animated show Bordertown, Gustavo Arellano spoke at the 2015 Hosokawa Lecture. We sat down to ask this Mexican some questions. By Edward Weinman

Edward Weinman: In your irreverent column “¡Ask A Mexican!” you answer readers’ questions about the customs and behavior of Mexicans while debunking common stereotypes. It has a weekly circulation of over 2 million. Why is it so appealing?

Gustavo Arellano: Notorious is what I call it. I’ve always talked about issues either serious or ridiculous in a frank manner that doesn’t pull punches. People find my take on immigration refreshing. Whether they like [my opinions] or not, they want to see the points [I’m making].

EW: You’re the son of two Mexican immigrants, one of whom was illegal. How does this influence the points you’re making?

GA: My life as the child of Mexican immigrants in Southern California is the inspiration behind every answer. As someone who grew up surrounded by Mexicans yet I’m answering these questions in perfect English, the “Know Nothings” are obviously wrong, am I right?

EW: Each column starts off, “Dear Mexican.” What is the dumbest question you’ve ever been asked by one of these “Know Nothings?”

GA: All of them if you think about it. Who on Earth would want to ask a columnist about Mexicans? The dumber questions are obvious. “Why don’t Mexicans learn how to speak English?” Let’s see. Have you ever talked to a Mexican recently? They will speak English. Not the King’s English, but give them a generation and they will speak English fluently.

EW: What’s led to the rise of satirical news that’s made programs like The Daily Show and your column so popular?

GA: People no longer trust power, or power treated with reverence and respect, as in the media of old. People see institutions for the foible-filled inanities that they are, and respect the people who properly ridicule them while also informing the public of what they do.

EW: You use journalism to mock the powerful. Can you tell me how it works, how you get away with it and if it’s ever landed you in trouble?

GA: The powerful don’t mind being yelled at… protested at, legislated at—any of that. They despise, however, to not only not be feared, but to be ridiculed. How do I get away with it? Well, I still have a job, don’t I? Trouble? Do multiple death threats and daily threats of lawsuits count?

EW: You argue that Mexicans in the U.S. are seen as “the other,” perpetual foreigners. Do you think this attitude will ever change?

GA: Obviously it’s better than before, but since it’s an easy migration between the U.S. and Mexico, people are always going to view us skeptically. Unpatriotic residents.

EW: Has “¡Ask A Mexican!” contributed to a change of discourse about the status of Mexicans living in the U.S.?

GA: That their bigotry is foolish and a thing of the past. I only have anecdotal proof that my column has had an impact, but I’m not going to stop attempting to [call attention to bigotry].

EW: Do the questions you receive ever make you angry?

GA: Whenever I read a question I laugh. Every question and laugh is different: angry, bitter, resigned or hilarious. That’s the only real way to deal with the inanity that is the human condition and being an American in the 21st century. In America, without laughter we are doomed.

EW: A quick Google search reveals that you’ve been working on a project with Fox called Bordertown, an adult, animated comedy executive produced by Family Guy creator Seth MacFarlane. You are a consulting producer. What can we expect from this comedy?

GA: It follows two families living in a fictional desert town on the U.S.–Mexico border. Like Family Guy it will have outrageous humor. My job is to make sure the jokes don’t stray into straight stereotypes. Like my column, you want to play with stereotypes but not embody them—better to re-appropriate them.

EW: The Hosokawa Lecture honors Robert Hosokawa, who after Pearl Harbor was detained in a Japanese internment camp, and released only after a former Whitman professor helped him land a job as a journalist. Can you relate to Mr. Hosokawa?

GA: I would not dare compare my story with those of Japanese-Americans interned in prison camps. [But Mr. Hosokawa] was a fellow journalist. I’m all for that. A minority who worked in what is an all-white field. It’s far better than in the 1940s, but journalism is still pretty bad today.

EW: Your lecture is titled “Journalism in a Jugular Vein.” You question whether or not, in this era when satirical news is popular, humor and irony are the best ways to capture an audience’s attention while still attempting to cover serous subjects? How did this lecture and the name come about?

GA: It’s a homage to the original motto of MAD Magazine, which was incredibly influential to my worldview and journalism.

EW: I’m a former, avid reader of MAD Magazine. How did the magazine famous for lampooning any subject influence your worldview?

GA: The magazine’s ridiculing of sacred cows, whether cultural or political. For them, there was humor in everything.

Dear Mexican: Are Mexicans bringing measles to the U.S.?

Dear Gabacho: Know Nothings who are trying to blame the recent measles outbreak on Mexicans—it ain’t happening. Studies show that Mexicans are among the most vaccinated people in the United States... The least vaccinated people in los Estados Unidos, on the other hand, are gabachos: the Amish, survivalists and suburban moms who lunch on kale. The myth of Mexicans bringing pandemics to kill off gabachos is a tool those on the Right try to use again and again to further their career, but the last guy who tried it? Former CNN host Lou Dobbs— remember him? He’s competing against a UHF signal nowadays, and that destiny will happen to all conspiracy-spewing gabachos like him—oh, and beautiful half-Mexican grandkids.