Art in the Trenches

From casting 12-foot Pinocchios to a giant, distorted Snow White, Mark Anderson’s Walla Walla Foundry is the go-to production shop for the world’s most prominent artists. Not bad for a local boy who took a typing class from the town mayor. By Edward Weinman 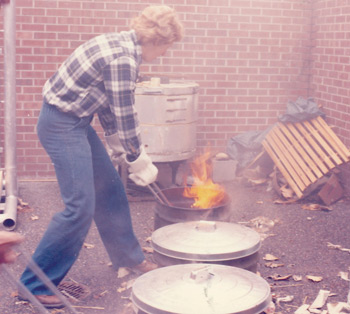 The iPhone. The iPad. The MacBook. These technological innovations empowered, enriched and transformed the world in which we live.

Mark Anderson ’78, founder and CEO of the Walla Walla Foundry, argues that these ubiquitous gadgets wouldn’t exist without art.

“Steve Jobs takes a calligraphy class and all of a sudden that’s the idea of how he wants his software and computers to work,” Anderson explained.

“The way his computers looked was as or more important than what they did. He wanted them beautiful.”

It’s not just computers, smartphones or tablets. Anderson argues that art is at the heart of our economy, which is one reason why he serves on the Washington State Arts Commission, talks passionately about protecting the arts in the classroom, and connects basic training in the arts to everything from the clothes on our backs to the farming equipment cultivating our food supply.

“Design. That’s the arts. The clothes we wear. That’s the arts. You want to buy a tractor. It’s beautifully ergonomic. That’s because someone wants to sit and feel it. That’s related to the senses. That’s the arts,” said the former studio art major, who attended Whitman in part, because his mother was a housekeeper at the college. 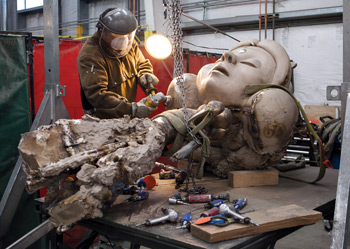 His defense of the arts makes sense. After all, Anderson is in the art business. And he’s successful. Big time.

Anderson’s Foundry is now arguably the largest contemporary art foundry in the U.S. It’s technologically proficient and it has grown more than tenfold in sales since 1991, according to the Walla Walla Union-Bulletin.

“Having the Foundry in Walla Walla has tangible economic benefits for our community,” said Walla Walla Mayor Jerry Cummins.

The 71-year-old Cummins says the Foundry’s ability to stimulate the economy is only part of the story. The mayor believes it improves the town’s quality of life, which makes sense considering the Foundry has produced numerous sculptures seen around Walla Walla and on Whitman’s campus, like Deborah Butterfield’s “Styx,” the skeletal horse made of driftwood and cast in bronze, standing next to Penrose Library.

“Walla Walla’s success is based on the soft smiles and welcoming voices of local residents. It takes a multitude of activities to bring visitors to Walla Walla and a good experience to bring them back. The art community, led by Mark Anderson and the Walla Walla Foundry, enhances the quality of living just like the wine industry that Walla Walla is famous for.”

Cummins talks enthusiastically about Anderson, and not just because Anderson helped put Walla Walla on the world’s art map. He’s especially proud, having played a role in Anderson’s youth as his ninth-grade typing teacher.

“I took a skinny, lifeless junior high school kid who came into my typing room and tried to hide in the back row, and I made him into what he is today—a successful business-person and renowned artist,” the fourth-term mayor joked. 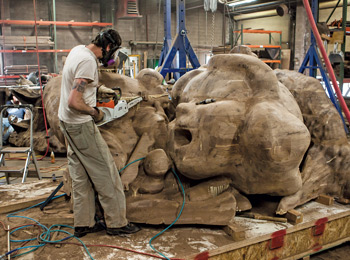 The Foundry opened in 1980 with two employees. Today, more than 140 full-time employees earn a living at the Foundry, which attracts artisans from near and far: from sand casters to fabricators to CAD/3D modelers. These artificers now call Walla Walla home, and they sprinkle spice upon the local population.

Jenna Gard arrived via Manhattan where she worked as a scenic painter and independent curator. She moved away from the borough because it was too expensive. Wanting to continue her career in the arts, she saw a job posting at the Foundry and applied. After a few interviews she came to Walla Walla for a “trial week.”

“Meeting everybody really sold me on working at the Foundry,” Gard said. “I was impressed by how much everyone knew from top to bottom and the overall passion and sense of humor everyone possessed.”

Gard still has issues with the diminutive size of Walla Walla, and continuously “seeing the same people everywhere she goes,” but she’s thriving.

“I’ve ended up working more ‘for New York’ than I was given the opportunity to while I was there.”

One reason Gard has ended up working more “for New York” is because Anderson’s company brings to Walla Walla the biggest names in contemporary art, all of whom exhibit their sublime creations at the most prestigious New York galleries. Artists such as Matthew Barney, Maya Lin, Dale Chihuly, Jim Dine, Marie Watt and Paul McCarthy have all had works carved, welded and cast at the Foundry. 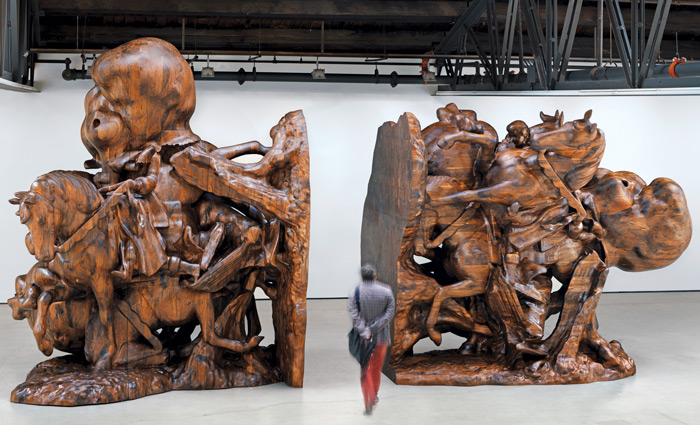 “When you work with them you’re ensured that your project is going to come off without a hitch,” said Marie Watt, a multidisciplinary artist from Portland, Oregon.

Watt has exhibited throughout the U.S., and has had work commissioned by the Bill & Melinda Gates Foundation. Watt has used the Foundry for more than 10 years. One of her most recent sculptures, 18 feet of blankets cast in bronze, greets visitors at the Tacoma Art Museum. Called “Blanket Stories: Transportation Object, Generous Ones, Trek,” the exhibit is a collection of blankets from the public memorialized in bronze.

“What they did with that project was incredible. The Foundry works on a scale that so few organizations like them can,” Watt said.

The Foundry draws talented artists because it performs on time at any scale, as Watt noted. Unlike most foundries, it casts in myriad materials like resin, wood, bronze, aluminum, stainless steel, brass, copper and zinc, and utilizes everything from CNC machines to 3-D printers to integrated robotics.

However, it’s not just the Foundry’s reputation that motivates Watt to continue her collaboration with Anderson’s company.

“There is something that feels like family when working with them,” said Watt, explaining that when her daughter was born Anderson sent a blanket embroidered with her daughter’s name.

“They retain a lot of their employees. People who I’ve met 10 years ago are still there today. There is this incredible brain trust available to solve complex problems. They are this world-class foundry and they are in Walla Walla.”

Getting inside the New York art world is like trying to find the key to the kingdom. The world of art can be cloistered and claustrophobic, a closed society not open to a former studio art major living in Walla Walla. So how did Anderson unlock the door?

I had a lot of pressure to move to San Francisco, but I have an affinity for Walla Walla. I'm glad I'm here. My clients like the town.

The Foundry’s success really started with Jim Dine, an artist who creates large sculptures, like the 12-foot bronze Pinocchio lurking outside the Cincinnati Art Museum.

Dine has been active in the New York art world since the early ’60s, and is said to have staged some of the first “Happenings,” a movement promoting the idea that art can be part of everyday life. These “Happenings,” or performance art, pushed for the viewer to participate in an event, rather than standing static.

One of the first large-concept sculptures the Foundry worked on with Dine was a pair of 12-foot hearts, each four-feet thick. Dine is represented by Pace Gallery in New York, and by producing these giant hearts the Foundry gained a sterling reputation.

“We shipped Dine’s work to the Pace Gallery, and through that we met Deborah Butterfield, so New York knew our name,” Anderson said.

“They didn’t know the scope of our capabilities but they knew someone out west was doing good sculpture work. This opened the door.”

It might seem odd that a foundry located in what was, in the ’80s, primarily a wheat-growing town could lure influential artists. However, Anderson believes Walla Walla gives his shop an advantage.

“I had a lot of pressure to move to San Francisco, but I have an affinity for Walla Walla. I’m glad I’m here. My clients like the town. They realize its limits, but because it’s a rural town with an agrarian economy it’s pretty self-sufficient.

“Artists in New York can have a difficult time being efficient about getting material and making it work. It’s so much easier in a small town where an artist can get what he needs quickly without having to drive all over town,” Anderson said.

Foundries are the trenches. It’s where an artist’s vision comes to life, in the metal shop, wood shop or on a warehouse floor of concrete. Anderson’s company works with the most opinionated clients around, some more eccentric and demanding than others. Does this ever cause conflict between artist and foundry sand caster, welder or robotics engineer? 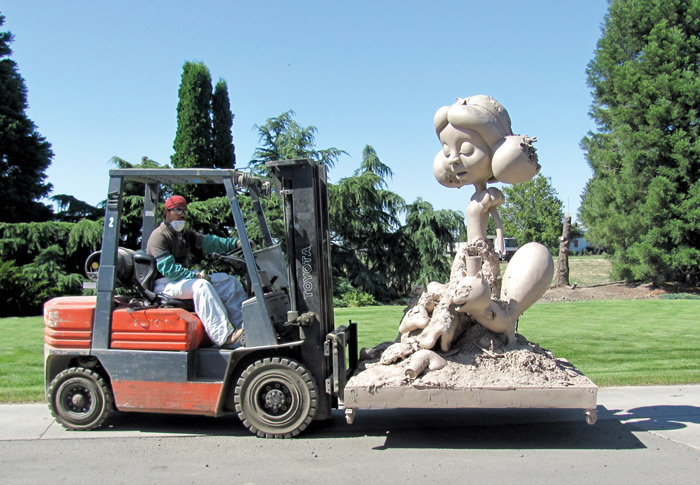 “If an artist has a finished sculpture, of course we can reproduce it. Now if they come to us with an idea, it’s our role to present the artist with several different approaches to making that work,” Anderson explained.

“We’re here to support artists and make their life easier by helping them do their work. I never want my employees to tell the artist what to do. You can collaborate in many ways—they’ll go along with your idea, but you can’t give orders.”

One strong-willed artist is Paul McCarthy. Represented by the prestigious Hauser & Wirth gallery, McCarthy’s exhibitions have shown at the Whitney Museum of American Art and the Stedelijk Museum, and he has participated in major art events like the Venice Biennale. Based in Los Angeles, McCarthy’s work interrogates popular American icons, often blending sexual or violent touches with what are primarily considered wholesome pop-culture images and symbols.

Take McCarthy’s “White Snow,” a series of drawings, installations and film where Snow White sometimes appears hyper-sexualized or haggard. An offshoot of this work is McCarthy’s “White Snow #3,” produced at the Foundry. These controversial sculptures are bronzed rather than white. Snow White’s appearance is heavily distorted. The Disney character has fat, puffy cheeks and hair that turns bulbous above the ears, looking like breasts.

With acclaimed work like “White Snow #3” produced at his foundry, does Anderson feel a kinship to the sculptures altering our perception of how we see the world around us?

“These artists have a vision, something that they’re trying to express. They don’t want it diluted. We want to be as exacting in making their sculptures as possible so their ideas come through clearly.”

A sexualized and battered version of Walt Disney’s beloved Snow White? What has the Foundry helped the quixotic McCarthy express?

“Paul McCarthy, as a visual artist, pulls back the curtain on our perceived world,” Anderson said.

“Snow White, or his version, ‘White Snow,’ shows the layers of content any story tells, especially in a Walt Disney classic. Paul takes these layers and dissects them, rearranges the image, alters its size and shape, and gives it back in a form never conceived of before.

“When the viewer engages his sculptures they then choose to see either beauty or the hidden dark side of humanity.”