Whitman alumni, parents and friends are encouraged to make a gift to Whitman during GiveBIG 2015, a one-day, online charitable giving event organized by the Seattle Foundation. The event will make your support for Whitman College go even further. On May 5, between midnight and midnight, your donation to Whitman of up to $2,500 via the GiveBIG link will be stretched with an additional gift from the Seattle Foundation. For more information, visit www.whitman.edu/giveBIG or call (509) 527-5189.

The Office of Alumni Relations has launched Whitman Connect, a portal that expands networking services for alumni and students.

In 2006, Whitman rolled out an email system and directory called Whitman Online! to allow alumni to access alumni office services with greater ease and to reconnect them with friends and classmates. As time went on, it became clear that current students could benefit from these networking opportunities.

“In late 2013, the alumni relations office partnered with the Student Engagement Center to add current students, and the power of the Whitman ‘family’ really took off,” Assistant Director of Alumni Relations Jason S. Arp ’94 said.

Emma Snyder ’14 used the network to find her current job at HubSpot.

“I was communicating with [an alumnus] through the Whitman Alumni network,” she said. “He played on a basketball team with someone at HubSpot, and connected me to him. This [connection] was crucial.”

As the alumni office and Student Engagement Center received more feedback, they worked to make the directory more useful and more personalized, resulting in Whitman Connect.

Led by the Offices of Alumni Relations and Advancement Services, a team of nearly 20 built Whitman Connect. Alumni who are already members of Whitman Online! have been transferred to Whitman Connect. connect.whitman.edu. 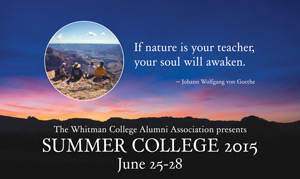 For more than 30 years, Whitman has provided a Summer College program to alumni, parents and friends of the college. June 25-28, participants have the chance to enjoy lectures and field trips centered on a theme. This year, they will be looking at nature through a liberal arts lens, a theme inspired by a quote from Johann Wolfgang von Goethe: “If nature is your teacher, your soul will awaken.”

“Summer College is our cornerstone continuing education program,” Assistant Director of Alumni Relations Jennifer Dilworth Northam ’91 said. “It’s the best opportunity for our alumni to be immersed in the Whitman experience.”

Summer College kicks off with an opening reception at Baker Center. Don Snow, senior lecturer of environmental humanities and general studies, is the keynote speaker.

“Summer College is a chance for environmental studies faculty to share with alumni a few of the treats we have in store for students,” Snow said. “We often use the local region as a teaching laboratory, and it’s a great one.”

To read more and to register, visit: whitman.edu/summercollege. 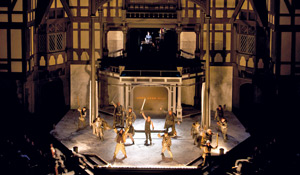 The Whitman College Alumni Association invites alumni, parents and friends to join us in celebrating history, music, theater and the great outdoors with exceptional travel opportunities such as this faculty favorite: Oregon Shakespeare Theater with Professor of English Theresa DiPasquale.

A variety of packages are available and include accommodations at the Ashland Springs Hotel, play tickets, a welcome dinner, Saturday morning lecture and post-play discussions.

Professors Bob Carson and Gary Rollefson to retire this year

Grace Farnsworth Phillips Professor of Geology and Environmental Studies Bob Carson and Professor of Anthropology Gary Rollefson are retiring from their teaching careers at Whitman College in May 2015.

Bob Carson joined Whitman in 1975 after receiving his Ph.D. from the University of Washington. Over the course of his career, Carson has been honored with the Whitman College Town-Gown Award, the Lange Award for Distinguished Science Teaching, the Alumni Association Faculty Award for Service and the George Ball Award for Advising. The author of six books and more than 100 articles, he has led students on trips as far afield as Mounts Everest, Aconcagua and Kilimanjaro, and as nearby as the Greater Yellowstone Ecosystem. Carson is also a tireless advocate for issues of environmental significance, serving on committees across the region.

Gary Rollefson, who received his Ph.D. from the University of Arizona, Tucson, joined Whitman’s anthropology department in 1998 as a visiting professor before entering the tenure track in 2005. Rollefson has taught courses focusing on the pre-history of West Asia, Europe and East Asia, while maintaining a vibrant career of scholarship, publishing more than 100 articles. His field projects in Israel, Jordan and Saudi Arabia, including the recent excavation of a tomb that was constructed around 5500 B.C. at Wisad Pools in Jordan’s Black Desert, have often included Whitman students as participants. Rollefson has successfully obtained Louis Perry grants at least seven times, as well as grants from the National Geographic Society, the National Science Foundation and many others. He has received the P.E. McCallister Award for Accomplishments in Field Archaeology from American Schools of Oriental Research and in 2009 was named the Kershaw Lecturer by Archaeological Institute of America.

Whitman College has assigned as its Summer Read book Haitian-American author Edwidge Danticat’s Brother, I’m Dying. The memoir brings back to life Danticat’s uncle Joseph, who raised her from the age of four until she left Haiti eight years later to be reunited with her parents in New York City. The New York Times called the memoir “remarkable. . . . A fierce, haunting book about exile and loss and family love.”

“We’re going where no one has gone before,” Robert “Rob” Manning ’80, flight system chief engineer at NASA’s Jet Propulsion Laboratory, said with his Curiosity rover hurtling toward Mars in 2012.

Three years later, the renowned aerospace engineer has witnessed his rover make the startling discovery that the red planet was habitable for life. What other discoveries can we expect on Mars?

Manning will answer this pressing question on the steps of Memorial Building as Whitman’s 2015 commencement speaker on May 24. Manning’s team designed the Curiosity rover now exploring Mars.

As a result of his numerous successes at JPL, Manning has received two NASA medals and is in the Aviation Week Magazine Space Laureate Hall of Fame in the Smithsonian Air and Space Museum. In 2014, he was the recipient of the Honorary Degree of Humane Letters from Whitman College. 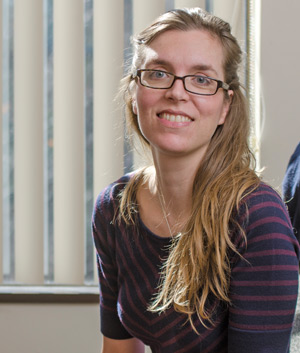 Things she knows a lot about:

Ancient Mediterranean: History of the Ancient Near East, Greece, and Rome
International relations and imperialism in the ancient world
Cultural and political interactions in the Hellenistic period
Rise of Rome as an interstate power, from 3rd to 1st centuries BCE
Carthage and the Punic Wars; Roman North Africa

Teaching “challenges all of us—as students and teacher alike—to continue asking questions and to make new and unexpected connections in our world.”