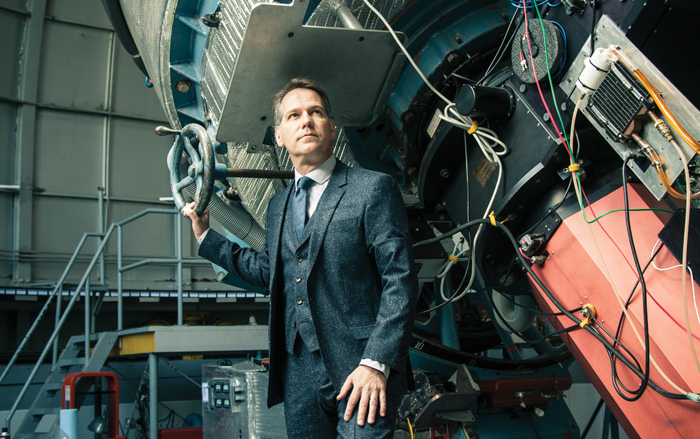 Astronomer Gerard van Belle ’90 looks through a telescope – and sees the future.

When asked why it’s important to spend hundreds of millions of dollars studying the stars, the astronomer at Lowell Observatory mused:

“Eventually, we are going to move off-planet. Not in tin cans, but we’re going to make places that look like San Francisco in outer space.”

“There will be serious interest and real work in that regard in 25 years. That’s probably earlier than most people would expect,” said van Belle, who before finding a home at Lowell Observatory worked for NASA’s Jet Propulsion Laboratory, managed by Caltech.

The former physics major believes the old model for exploring space, budgeted by the U.S. government, is disintegrating, thus speeding up the human race’s ability to “satisfy an innate urge not to just explore new frontiers but to expand into them.

“The model of government doing all the work, running the design, and either tolerating or not tolerating risks is going by the wayside. I see new, private companies that are making rockets for cheap; they are changing the landscape of how things are being done.”

Despite the means to live off-planet becoming a not-so-distant reality, van Belle doesn’t imagine that humankind can build some sort of utopia in outer space, like in the film Elysium. As a species, he believes we should look closer to home for our own slice of paradise.

“My own ‘utopian’ view is to recognize the special place we already have on Earth, and how we need to take special care of it. Looking down from afar will hopefully inspire such views on the fragility of our home,” he said.

This philosophical outlook on our earthly existence is one reason why van Belle was recently featured in Esquire, once in an interview about observing Supermoons, and once as a model outfitted in the latest fall fashions, specifically a two-button, three-piece, wool-polyamide-and-silk suit and cotton shirt by Boss, adorned with a wool tie by Drake’s.

The magazine story idea originated around a road trip from New York to Los Angeles to meet “22 men who are redefining style all across America,” Esquire wrote. The magazine penciled in stops along the 3,200-mile trip, one of which was Flagstaff, Arizona, home to the Lowell Observatory.

“[Editors] looked at the observatory website and were like, ‘Okay, this guy.’ It was random, but I’m a firm believer in making the most of these types of opportunities.”

Some picture astronomers hunkered down behind computers and super-massive telescopes wearing shorts, flip-flops and shirts with popcorn spilled across the front.

“Maybe that’s the norm, but I’m a bit more sociable than most astronomers. I credit that to my Whitman experience, especially belonging to the Sigma Chi fraternity.”

Van Belle said his job at Lowell Observatory is to imagine impossibly powerful telescopes, and then to build them without breaking the bank.

“I like to measure sizes and map the surfaces of stars. You need a telescope the size of a football field, or even four football fields. That’s too expensive, so I buy small telescopes and link them together.”

Given that the hardware he and his colleagues use to explore the stars dotting the vast solar system costs tens to hundreds of millions of dollars, an ability to articulate the goals of his chosen field comes in handy when pressing the flesh for donations.

“In astronomy, we’re always well served by any forms of non-traditional outreach, like this photo shoot in Esquire. My communications skills have served me admirably when working in the field and approaching fundraisers and potential donors. Taking a class such as ‘Movement for the Actor’ at Whitman really helped me find my comfort level when doing public presentations.”

Van Belle utilizes technology to take close-ups of the heavens. He says that his work allows us to ponder basic philosophical questions about humanity: is our way of life normal? Are we the center of the universe or just elaborations on a planet going around a regular star?

“The scientific revolution was kicked off by astronomical science. Galileo built his telescope and countered the religious dogma of the time,” van Belle said.

“Twenty years ago we went from knowing of only a single planet around a star other than our sun, to today knowing of over 2,000 planets around other stars. Astronomy has transformed how we see these basic building blocks of our universe.”

There are some 200 to 400 billion stars in the Milky Way, and some 50 to 100 billion other galaxies in the observable universe. Thinking about this vastness can induce headaches, but van Belle’s work helps us navigate galaxies like ancient sailors crossing an ocean.

It also helps scientists understand more about climate change and global warming. Van Belle mentioned a time period, 1650-1700, when the sun underwent the “Maunder Minimum,” where there were few sunspots seen. This period coincided with the “Little Ice Age” in Europe. While it’s important to keep in mind the old maxim of “correlation is not causation,” there appears to be evidence, van Belle explained, that low sunspot activity does indeed connect with a lowered solar output.

“Examining other Sun-like stars for evidence of spots can tell us about how normal these sorts of minima are, and the resultant changes in brightness, which is important in the context of considering global warming. Do they happen all the time? Are there maybe periods where these sorts of stars even brighten up? It’s hard to definitively answer these questions with a sample of N=1 (i.e. just the Sun), so studying others stars at very high spatial resolution can provide insight.”

For van Belle, though, there’s a deeper reason, one not moored to science, as to why he spends his days and nights tracking stars. Reading the architectural blueprints of our solar system inspires awe.

“It’s part and parcel of knowing more about our home in the universe.” Plus, van Belle’s job is cool, at least that’s what the people he meets on airplanes think.

“Astronomy has a deep history of inspiring people. It’s part of servicing a natural curiosity that people have. Every time I meet people on airplanes and they find out what I do, they ask me about sky or space or the latest pictures from the Hubble telescope.

“Each time people step out at night they step into my office,” van Belle said.