Life, the Universe, and Everything 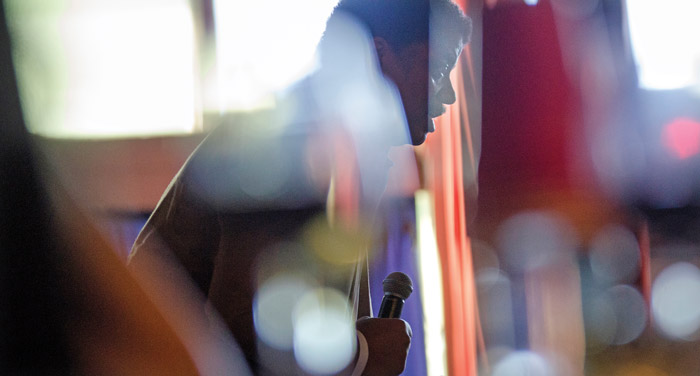 Prior to two sold-out lectures at Whitman, Dr. Neil deGrasse Tyson shared his thoughts on science education, the rebooted Cosmos TV show and life as the people’s astrophysicist.

The first Cosmos with Carl Sagan is more than 30 years old. The new Cosmos came about with the help of an unlikely ally, Family Guy creator Seth MacFarlane. How did that happen?
If you ever watch Family Guy, every second episode there’s a reference to science, not the least of which in the adventures of the little baby Stewie, who has a time machine and a weather control machine, and so I knew watching Family Guy that there’s a hidden science geek lurking within this man.

I mentioned [Cosmos] to him. We were having lunch and I said: might you be interested in this, a pilot’s going to cost you a couple million dollars? He said: I’ve got a better idea. Why don’t I take it to Fox [network]?

Were you initially wary of that? Fox isn’t known for its documentaries.
At that instant I thought that was the stupidest idea I ever heard – they’re not going to get it, this is a mistake, it’s a waste of each other’s time. Those thoughts occupied maybe six seconds in my head. Often, people would paint all of Fox as though it was Fox News, but that’s just false. Fox had Glee. Fox has The Simpsons and all of the acerbic liberal commentary that goes on there. Fox, if you’re old enough to remember the ’80s, had In Living Color, a very forward show on race relations. So the stereotype that it’s easy to have for Fox, if you want to invoke it, applies only to Fox News.

In the second six seconds that I thought about this, I realized that if we got Cosmos on Fox, it would be extraordinary. It would have the greatest reach of any science program in the history of the universe. In the history of history. So when he said “let me bring it to Fox,” in those 12 seconds, I said: “That’s the most brilliant idea I’ve heard!”

The graphics in the show are amazing. Was that part of the benefit of working with a big company?
We had access to huge talent that previously had brought their talent to bear in the storytelling of major motion pictures. Our director of photography was Bill Pope, who was the director of photography for The Matrix trilogy and Spider-Man.

Outside of Cosmos, most people have caught at least one of your appearances on The Colbert Report. How many are you up to?
I’ve been on Stephen Colbert 13 times. More than any other guest. He just said I’m his favorite guest, but I checked with his staff, because I don’t know if he’s just being nice, you know, and they all said yes, so I was flattered by it.

You were instrumental in demoting Pluto from planet status. Have you been forgiven for that yet?
The people who were surely not going to forgive me were in third grade in 2006. Now they’re all at college and they have other priorities in life than the planetary status of Pluto. However, I did get one letter recently from a 22-year-old man. And it was an apology. It was written straight as can be. It said: Dear Dr. Tyson: Fourteen years ago, I wrote you an angry letter complaining you demoted Pluto, and in that letter, I called you a poo-poo-head. I want to apologize profusely for calling you that name. Since then, I have studied the problem, looked into why you made that decision, and you have my sincerest apologies. It’s a grown-up letter using the word “poo-poo-head.” That’s pretty good.

You’re pretty smart. What’s the most difficult question you’ve been asked?
Someone asked me: what is the meaning of life? My answer was that people look for meaning as though it’s something you can find under a rock or behind a tree. Whereas I have found that meaning is not something that you look for and find but something that you create for yourself and for others. There are two things I try to do every day. One of them is learn something today that I didn’t know yesterday, and another is by whatever gestures or energies you have available to you, lessen the suffering of others. And if you do both of those things, you will create meaning for yourself and meaning for others.

Do you think that having what you and Carl Sagan call “the cosmic perspective” makes you treat other people better?
I think once you know certain things about the cosmic perspective, you think differently about your relationship to other people, your relationship to other life in the world. So as it’s true that you and any other person have a common ancestor, you and any other life form in the world have a common ancestor. Do you know that we are more closely connected with mushrooms genetically than either mushrooms or humans are connected to green plants? Isn’t that cool?

Do you see your role as a science educator or communicator as political in any way? Bringing science back to the mainstream seems to have raised awareness of what organizations like NASA are doing.
I don’t care about the politics. Science is not bipartisan, it’s non-partisan. What science gets funded is entirely political. I’m not saying there’s no politics in science. What I’m saying is science is not partisan. Those are two different statements. NASA historically has not been partisan. What disturbs me is to see partisan politics layered onto objectively true knowledge of the physical universe. That disturbs me greatly.

But there’s no doubt that your TV shows, lectures and books have made science cool again.
I agree, and I think initially I had anecdotal evidence, but it’s very real evidence now that science is trending. I’m at 2.4 million Twitter followers now. I feel like every morning waking up and saying: “Did I tell you I’m an astrophysicist? You can still bail out now.” I think there is an inner flame that is getting fanned by these offerings of science.

Do we do a good enough job of bringing science into our kids’ lives?
They’re already interested. Children are scientists. What’s a scientist? A scientist is curious about something they don’t know. So they turn over a rock, pluck petals off a flower. They’ll do things that generally disrupt the order of your home! If there’s an egg sitting on the counter, what do you say to them as a parent: “Oh, don’t touch that.” When my kids reach for the egg, I just let them reach for the egg.