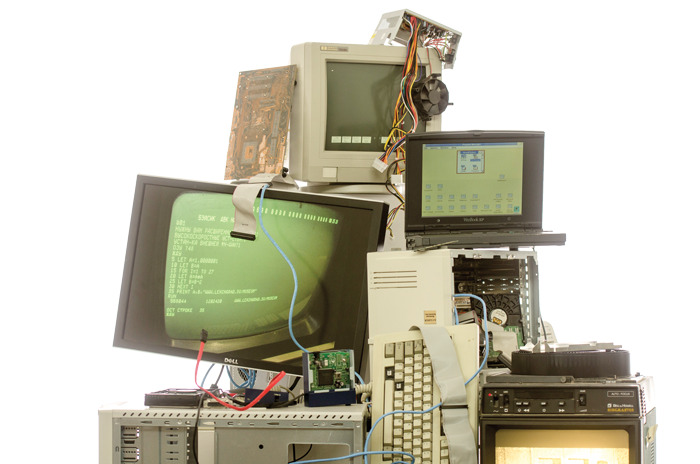 To illustrate Whitman Magazine’s article on the development of a new computer science program, we commissioned art majors Mahon Yoder ’15 and Eduardo Vazquez ’15 to create an installation piece that represents the rapid pace of technological change. Supervised by Assistant Professor of Art Justin Lincoln, the students constructed “Obsolescence.” Photo by Matt Banderas ’04

Computer science is shaping the way Whitman faculty members work and think in ways many might not even realize.

So said Associate Professor of Foreign Languages and Literatures - French Sarah Hurlburt ’91, one of 12 faculty and staff members on the Computer Science Steering Committee, a group that has guided Whitman in the implementation of its nascent computer science program, established this fall.

Hurlburt joined the steering committee because she recognizes the value that computer science classes will bring to other disciplines at Whitman.

“A liberal arts education has to be founded in critical thinking, and without an awareness of how these amazing tools make and are made, we are simply accepting their structuring influence on our lives and our thinking as natural,” Hurlburt said.

Where it might seem odd that a humanities professor at a liberal arts college depends on computer science skills for her work, Hurlburt said that some of her “favorite research in literature uses computation to make visible patterns and meanings indiscernible to the naked eye.

“You might have a feeling about a shift, be it aesthetic or cultural or conceptual, but the computer lets us concretely locate when and how that shift appears in literature.”

Several donors, including Microsoft, helped give rise to the computer science program, which, according to Associate Professor of Mathematics Albert Schueller, is a “substantial contribution to the college curriculum.”

Schueller is also a member of the steering committee, which will be involved with hiring three new computer science faculty positions and contribute to the direction of the program and its integration into Whitman’s academics.

“It’s been a good experience,” Schueller said, talking about serving on the steering committee. “It’s going to help computer science fit better into the culture and it’s going to help the people who ultimately occupy these faculty positions.”

The committee provides “multidisciplinary input” with faculty members from the mathematics, English, physics, foreign languages, sociology and psychology departments, among others. Over the next two to three years, one of its major contributions will be the members’ involvement in adding three tenure-track computer science positions.

Through consultation with computer scientists at other liberal arts colleges and discussions held this past summer, the committee agreed that hiring “an established computer science faculty member” is an important step.

According to Schueller, that person will be “someone who’s been teaching computer science for a period of time. [That person] will guide us in terms of developing a new curriculum, developing new programs – whether that’s minors, majors, combined majors.”

This “founding faculty member” – as the steering committee calls the future hire – will have a major impact on the direction of the program and its conversion into a major. The professor is slated to begin in the 2015-16 academic year, and will help hire the two additional faculty members.

For Schueller, who already teaches an introduction to programming class, creating a solid computer science curriculum is vital.

“We should build a strong, foundational, centralized computer science program, which is [already] a well-defined entity,” he said.

Alongside Schueller’s intro course, this will include classes on data structures and analysis of algorithms, which together will “form the core set of principles that you find in most liberal arts computer science programs.”

“I think the major thing that sets Whitman students apart is that they have learned how to think and effectively communicate, so regardless of what job function someone wishes to pursue, they are equipped to ask meaningful questions, dive into complex thinking and problem-solving, and work with people different from them to accomplish great things.”

Allen Tucker, visiting professor of computer science, will be teaching one of these courses (Data Structures with C++) this year. Tucker is here to consult on the new program and brings with him experience in building computer science majors at such institutions as Colgate University, Georgetown University and Bowdoin College.

Undergraduates with a computer science and linguistics background, for example, “could go to a place like Google and shine because they know language as well as technology. If you’re a graduate of a place like Whitman, you have a chance at understanding both while you’re an undergrad, and that’s a huge advantage,” Tucker said.

Future computer science students will develop strong computational thinking skills which they can bring to bear on their own disciplines, whether those are psychology, art or English.

“Having students who are computer literate will allow faculty across the college more choice in their assignments and in the variety of projects they can craft,” said Sharon Alker, associate professor of English and general studies.

Also a member of the steering committee, Alker added: “Professors might supplement their current rigorous written assignments and projects with a wider variety of equally challenging digital projects, which may involve such things as forming and curating online archives, mapping literary, historical or geographic space and experimenting with online technologies that allow students to play creatively with form and genre.”

Alker, Schueller and Hurlburt are at the exciting stage of imagining where the new computer science program will take future Whitman students. Hurlburt, for example, can’t wait to work with computer-savvy students who can combine literary awareness with programming skills.

“They will have a different conception of what kinds of questions we can ask, and how we might go about testing our ideas. We are going to do some cool, cool stuff together.”