To connect the world to Whitman and Whitman to the world: Scholarships honor mentors and encourage international study

Technology may have made the world smaller, but Whitman believes that it is connections between people and places that will bring the world closer. Programs that attract international students to Whitman and those that send Whitman students abroad play important roles in a comprehensive liberal arts education. Students from overseas introduce the campus to new world views, while those returning from study in a foreign country bring an international awareness home to the Whitman community. Several alumni have chosen to support these exchanges with generous gifts. When Akshay Shetty ’99 came from Bombay, India, to Whitman College, his transition was eased by Jim ’63 and Jayne McCarthy, who acted as Akshay’s International Student Friendship Family. An “Outstanding Student” scholarship made it possible for Akshay to attend Whitman, but it was the McCarthys’ support and mentorship that helped him thrive as both an economics major and a stand-out player on the men’s tennis team, and also set a solid foundation for his career and life post-Whitman. After graduation, Akshay worked for several years as a management consultant and investment banker, earned an M.B.A. at the Kellogg School of Management at Northwestern University, met and married Keech Combe, and is now serving as the Co-CEO of a multinational consumer products company.

“Jayne and Jim represent everything that is amazing about the Whitman community, and it is due to the generosity and hospitality of locals like Jim and Jayne that international students can come from across the world and feel like they are at home at Whitman instantly.”
—Akshay Shetty ’99

To honor the McCarthys and make it possible for other talented international students to attend Whitman, Akshay and Keech established the F. James and Jayne S. McCarthy Scholarship Endowment. At Whitman, Jim was a history major, a member of Phi Delta Theta, and played on the golf and basketball teams. He later spent 14 years on the Board of Overseers. Jayne was coach of the women’s tennis team at Whitman for 14 years. Both have been honored for their service to Whitman. This fund adds to those honors, and will allow students from abroad to benefit from the tremendous educational and extra-curricular experiences offered at Whitman College. 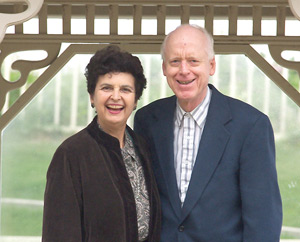 Erik ’60 and Edith Bergstrom are long-time, loyal supporters of Whitman College. They have given generously in the past to support Penrose Library, the Fouts Center for Visual Arts, and the Chitwood and Bergstrom Geology Endowment, which provides funds to purchase equipment, books, software and other supplies to support the teaching and research of the Geology Department.

Now, the Bergstroms have made another contribution to further the mission of Whitman College. Through the Bergstrom Foundation, the couple has established a scholarship endowment to provide support for students who demonstrate financial need in order to participate in study abroad opportunities in Latin America.

The Bergstrom Foundation works with groups throughout Latin America, supporting programs that stabilize population and improve quality of life. The Foundation offers grants to organizations involved in reproductive health.

Founding and managing the Bergstrom Foundation has given Erik and Edith an opportunity to support many social service programs throughout the Western Hemisphere. They believe that students need a better understanding of the events and culture of Latin America in order to influence change in those regions. They are happy to create this scholarship to provide the opportunity for students to explore this area of the world.