To celebrate two lives by making a difference for others: The Jamie Soukup Reid and William Reid Memorial Scholarship Endowment 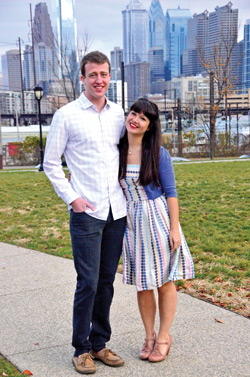 Ron and Kay Soukup watched their daughter, Jamie, thrive at Whitman College. For many parents, that would have been enough. For the Soukups, however, there was a next step. The couple wanted other young people to have the same excellent education their daughter experienced, regardless of the ability to afford a Whitman education. They created a scholarship endowment to support any student who won admission to Whitman College. The Soukups understood that a Whitman education can be a life-changing experience for a student and they wanted to be part of making that difference. They had no idea that this fund would one day become a memorial to the too-brief life of their daughter.

Jamie Soukup Reid ’10 and her husband, Will Reid, were killed in a car accident in August of 2013. To honor their lives, the Soukups renamed their endowment the Jamie Soukup Reid and William Reid Memorial Scholarship Endowment and added a generous gift which tripled the size of the fund. Will’s parents and other family and friends also contributed to the endowment, to recognize and commemorate the lives of Will and Jamie.

In August 2013, Jamie, newly pregnant, and Will traveled to North Carolina for a friend’s wedding. They set off to return to Philadelphia, riding to the airport in a hired car. The driver, subsequently sentenced for being under the influence, drove the vehicle off the road and into a tree. Jamie and Will were both killed.

No one who knew them will ever forget these lovely and promising young people. Jamie impacted all who knew her at Whitman, and she and Will changed the lives of many of the students in their classrooms. Their love of education will be passed along to others through the Jamie Soukup Reid and William Reid Memorial Scholarship Endowment.