In the Tasting Room 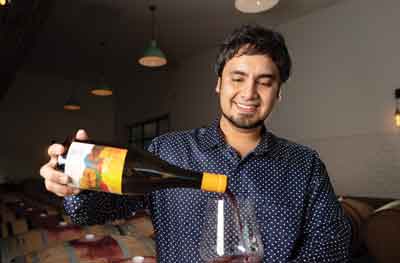 Visitors to Force Majeure tend to be serious connoisseurs and collectors. At the premium estate winery in the Rocks District of Milton-Freewater, south of Walla Walla, they’re not just there to sip and swirl—but to have in-depth discussions about the finer details of these fine wines, from how they were made to how they’ll age.

Alex Motamedi-Ponnaz is only too happy to oblige them. “I’m a dyed-in-the-wool extrovert,” he says. “I’m the kind of guy that being alone for a long time drains my energy and interacting with people gives me energy. It puts a pep in my step.”

As the winery’s hospitality manager, Motamedi-Ponnaz is responsible for the full visitor experience and he’s such a natural at connecting with guests and making them feel at ease that it seems impossible he ever imagined doing anything else.

Although Walla Walla’s wine industry was already booming when Motamedi-Ponnaz came to Whitman, he says he was largely oblivious to its significance for most of the time he was a student.

“When I came here, I just thought: This is a cute college town in a quiet corner of the Northwest,” he says, adding that he saw a new side of Walla Walla after he was old enough to visit the tasting rooms. “I realized that, in terms of the economy and jobs and national and international renown, this is also a wine town.”

After graduation, the history major stayed in town, and enrolled in a master’s of secondary education program. “Eventually it dawned on me how tough teachers have it. I have such respect for teachers; it’s a really stressful job. It wasn’t the right track for me.”

In the meantime, he’d been working in wineries in various capacities and found the experience eye-opening: “I started seeing the whole process of how wine is made, getting a real kind of technical, scientific and artistic sense of it. I knew I’d only scratched the surface of a very large and very interesting iceberg, and I realized maybe I could make a career out of this.”

Encouraged by his fiancée, now wife, Gillian Frew ’11, he enrolled in the viticulture and enology program at WWCC and faced a new kind of learning curve. “I was a humanities and social sciences guy, and then I started doing courses in soil science and organic chemistry, as well as the history of wine, sensory analysis and tasting classes.”

He spent a lot of time working on the production side while he was doing the wine program: sorting and crushing grapes, checking acidity, alcohol and sulfur dioxide levels, pumping over and punching down fermenting juice, barreling down wines and topping barrels off as they evaporated. He thought he’d follow that path and become a winemaker, although he had misgivings about the often-solitary conditions of working in a cellar.

“But then I gave tasting rooms a shot,” he says. “And I realized that I can speak out of a theoretical knowledge of wine and a deep historical and cultural knowledge of wine, as well as my lived experiences making the stuff. That kind of career track fit like a glove.”

In his current role, Motamedi-Ponnaz is tasting room pourer, facility tour guide, educator, salesperson and every bit an entertainer. Because Force Majeure is a limited-production facility with a lean crew, he still gets involved with some production tasks from time to time and he admits he sometimes thinks back fondly on his student days “foot-stomping shiraz,” but believes he’s headed down the right path.

“I really get to flex my social muscles. Who knows—maybe the future will hold more winemaking for me, but I’m very happy where I am now.”

Next: At the Table