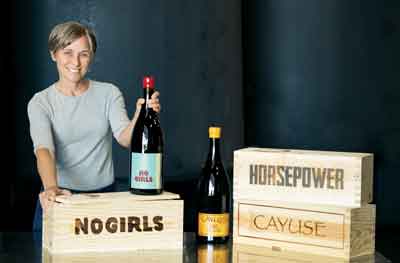 Although she doesn’t work on the stock exchange, you could say ’Brielle Baker Cunnison ’95 works in futures. Cunnison is operations specialist for Cayuse Vineyards, one of the most widely acclaimed wineries in the region. The Cayuse brand is so sought-after that the wines are purchased by members up to two years before they are produced. As a result, customers expect an exceptional experience from the moment they purchase the wine to when they finally drink it years later.

While at Whitman College, Cunnison never saw her future in wine or even Walla Walla. “I’ll never forget my first visit to Walla Walla in 1990,” Cunnison says. “I felt like I’d entered the Old West.” She, along with her husband and Whitman classmate, John Cunnison, decided to move back to the valley from San Diego a little more than 10 years after graduating. “It was largely because we were looking for a good quality of life and place to raise a family,” she says. When they returned, the pair found the same small-town charm they remembered coupled with unfamiliar amenities that hinted at the city’s new status as a destination for wine lovers and foodies.

The English major took a job at a local communications company, while John joined Baker Boyer Bank. After about seven years in her communications role, Cunnison was ready to move on: “I felt I could use a change,” she says. “As I was looking at jobs, I got an email from the general manager at Cayuse Vineyards. We knew him through an extended group of friends, which included some Whitties. It was out of the blue, but it was perfect timing.”

Cunnison started working part-time in the ultra-exclusive winery’s downtown Walla Walla office, with primary responsibilities in customer service and compliance, and as the business grew, so did her role. Today she works from the Milton-Freewater, Oregon, wine studio, which serves as the production facility for Cayuse and its sister brands, No Girls, Horsepower and Hors Catégorie.

As operations specialist, Cunnison’s responsibilities include entering harvest data into the winery management software—essentially creating the wines virtually and tracking inventory. She also coordinates shipments to the wine media and to charities who auction it off to raise funds. She plays a major role in organizing Cayuse’s annual members-only party, as well.

“It isn’t an industry I trained in so it’s all been a learning curve these last eight years. It’s meant a lot of asking why is it this way, or saying this doesn’t seem right or we could do this better,” she says. “I really credit my education at Whitman for helping me be flexible and curious and asking the right questions.”

A Taste for a Lifetime of Learning

Although Cunnison’s role doesn’t require an in-depth knowledge of wine, she says learning about those things from the experts she works with (including enologist Will Thompson ’09) is a fantastic perk. One of the ways she increases her education is through blind tastings that Cayuse owner and winemaker Christophe Baron hosts for his team. Cayuse competes with some of the best wines in the world, and she feels it is her role to support the exceptional wine making at Cayuse with behind-the-scenes processes of equivalent quality.

“I have learned how to identify varietals that I’m tasting, and I’ve been able to experience wines from all over the world. It’s a fun process,” she says.

And that’s one of Cunnison’s favorite things about wine—that even experts in the field are still experimenting and discovering. It’s the perfect industry for those with a thirst for knowledge.

“There’s no room to be bored—there’s still always something new to learn,” says Cunnison.

Next: In the Tasting Room

Cheers to a Great Cause 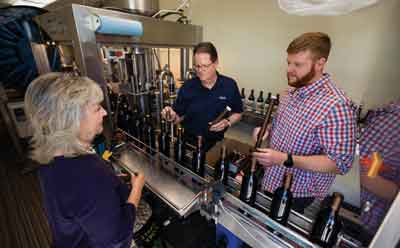 All profits from the sale of the special bottling benefit the Whitman Institute for Scholastic Enrichment (WISE), a program that introduces rising ninth-graders to college life with the aim of inspiring them to pursue a college education. During the all-expenses paid, multiday immersion program, students attend classes taught by Whitman professors, enjoy activities on Ankeny Field and spend two nights in a residence hall. WISE participants and their parents also can sign up for college prep workshops and panels with Whitman financial aid and admission staff. More than 300 local students have benefited from the WISE program since its inception in 2006.

L’Erudite is a blend of 40% cabernet sauvignon, 30% merlot and 30% cabernet franc from the most distinguished blocks of the estate winery’s Seven Hills and Ferguson vineyards. While most of L’Ecole’s bottle labels bear the image of the historic Frenchtown School it calls home, L’Erudite features another schoolhouse: College Hall, which once stood on land donated to Whitman by Dr. Dorsey Syng Baker, the great-grandfather of Baker Ferguson ’39, who established L’Ecole with his wife Jean in 1983. The wine is available exclusively in L’Ecole’s Westside and downtown Walla Walla tasting rooms and online at lecole.com.