"Just Make the Decision to Act"

In 2009, as a sophomore in high school, Sarah Cronk ’15 started an inclusive cheerleading squad that welcomed students of all abilities.

Nearly 10 years later, the Whitman alumna has seen her organization, The Sparkle Effect, grow to more than 200 teams across the nation. In January, The Sparkle Effect was the focus of an episode of “Turning Point,” produced by BYU-TV. 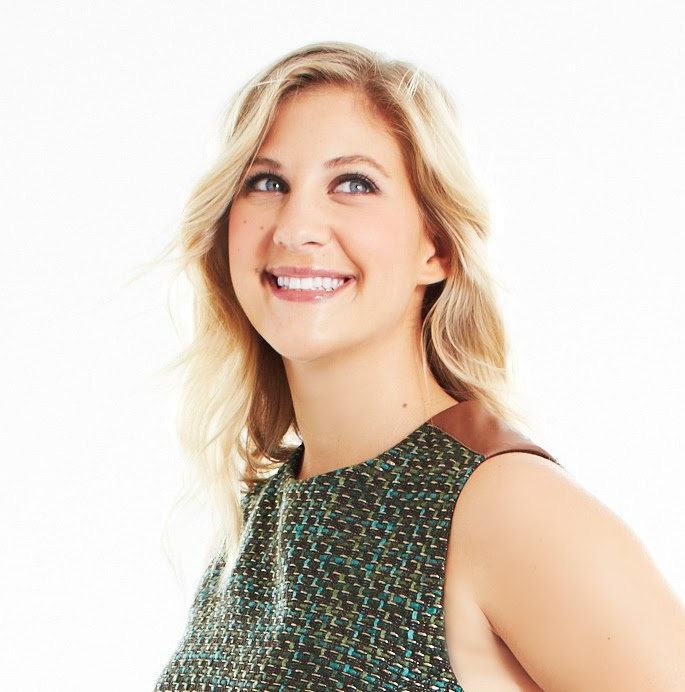 Now Cronk is ready to push The Sparkle Effect even further and engage in the growing national discussion around inclusion for people with disabilities.

Q: Why is inclusion something that you feel is important, particularly for students in high school?

My older brother is on the autism spectrum. In high school, students make friends in their extra-curricular activities, not with who you sit next to in math class. None of that was accessible for my brother in high school, until one day he was invited to join the school swim team. It just took one person to see his potential and open up the opportunity to him. It changed everything for him.

High school is where a lot of young people are starting to build their social consciousness. How are they going to act around others who are different? There’s so much emphasis nowadays put on achievement and success — on being the very best football player, or the very best student. Sometimes we end up creating students who are very anxious, very self-focused, very driven in what they do, but lacking that empathy piece. We’ve found that schools that adopt programs like The Sparkle Effect end up bringing that empathy to the forefront.

Q: What are some of the barriers that keep high school activities from becoming more inclusive?

A: Disabilities rights issues follow the same paths as a lot of other civil rights issues. We start with segregation, which was the case in most American schools into the 1980s. Mainstreaming wasn’t considered a popular option until the ’90s. Before then, a lot of students were in a special ed classroom and never had any interaction with their neurotypical peers. The whole concept of inclusion is by and large still pretty new. So we’re trying to catch up in a lot of ways. 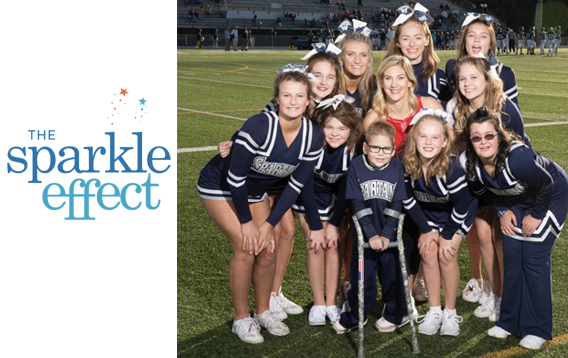 In January, The Sparkle Effect was the focus of an episode of "Turning Point", produced by BYU-TV. You can watch the episode here.

When I was in high school with my brother, he wanted to join the school choir. They told him no. He knows how to sing, he can read music. Based only on his disability, they said, “We don’t want this student in the choir. He’ll need special attention and that will take away from the other students.” It’s about not having that kind of scarcity mindset — that if one student needs more, it will automatically take away from everyone else.

Q: Do you see solutions or have suggestions for removing those barriers?

A: One, we gotta educate more people. We’ve got to bring it to the forefront. We’ve come so far as a nation in terms of gender and sexuality, race and ethnicity. We haven’t had a lot of those conversations for the disability population yet. That’s an important first step. There’s a lot of fear associated with disability. You won’t believe the questions I get asked when working with high schools to launch a team: “Do we need to have an ambulance on call for these students?” For what? In case they spontaneously combust? They’re not that fragile!

Two, it’s about understanding that accommodating individuals with disabilities is so simple. When I think about this whole notion of “special proms” where schools or community organizations are hosting “special proms” exclusively for people with disabilities, and everyone gets crowned king and queen. It’s one of these completely manufactured scenarios. And it would be so easy to make a regular prom more accommodating. It’s so simple — yet people just keep thinking, “We need to create a completely separate thing.” We’re duplicating efforts when we don’t need to be.

It’s a trickier ask for contact sports like football. But for the areas where you can be adaptive, why not be? Just have it be open and accommodating.

Q: When you started Sparkle, it was a student-led initiative. What are things students could be doing now to empower their schools to be more inclusive?

A: I think that it starts with looking at whatever that school already has — whether that’s newspaper, student government, sports teams, clubs — making sure that it’s clear to the entire student body and community that the activity is accessible to people of all abilities. And if it isn’t set up that way, what small changes can we make to make it more accessible?

Another thing too is continuing to talk to people with disabilities. Educate yourself. It’s not rocket science. I think we’ve started to become a more inclusive culture across the board. When you’re inclusive of one group, you’re inclusive of all groups. It starts with education and it starts at looking at your sphere of influence. I was on the cheer team, and that’s where I started. Even if you aren’t in an activity, ask someone to sit with you at lunch — that was the first step it took for my older brother. Just making those small gestures can make a huge impact. 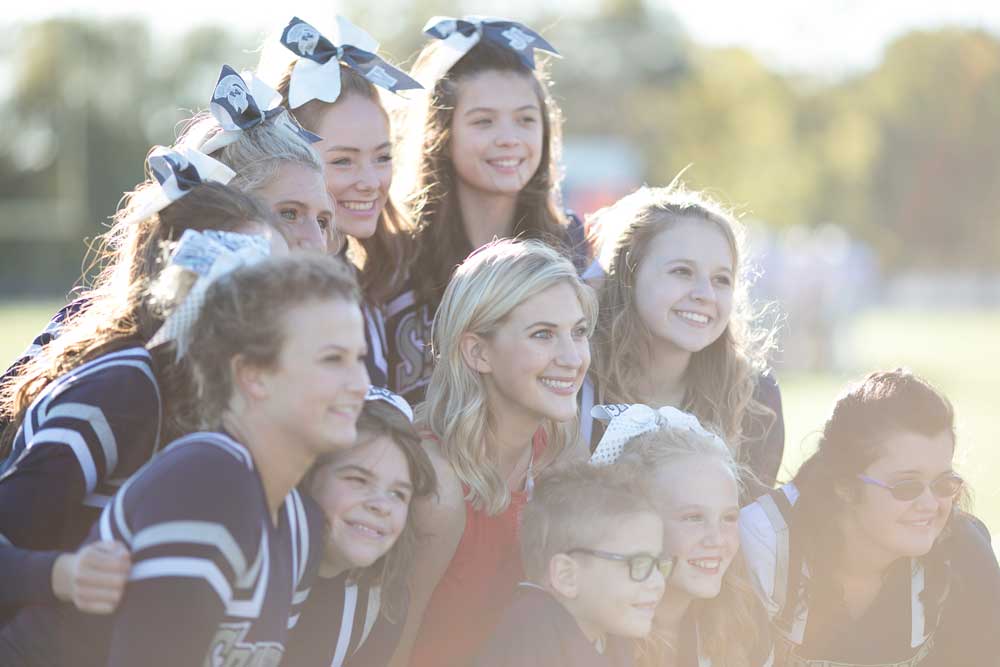 Sarah Cronk '15 started the first Sparkle Effect team when she was 15 years old.

Q: How do you feel about hitting that 200 teams milestone?

A: It’s wild. My goal for a really long time was 100 teams. I said, “I’m gonna create 100 teams.” And everyone said, “Yeah, sure. You do you.” We hit 100 teams when I was a sophomore at Whitman. The 100th team was Mercer Island High School outside of Seattle. I can’t say when I was 15 that I had vision of what things would look like 10 years down the line, or knew whether or not it would ever take off. I just knew that I had that number in my mind: “I’m going to create 100 teams, if it’s the last thing I do.” Now to have it still be part of my career as a young professional, it’s a dream come true.

Q: What is your goal for The Sparkle Effect for the future?

A: We’re continuing to generate teams every year. Our mission now is to take a bigger step in the national conversation around inclusion. To start helping our student leaders build a deeper understanding of their role in that national inclusion movement — why we do the things we do; what sets a Sparkle Effect team apart — to continue constantly growing.

Q: How did your experience at Whitman prepare you to take this nonprofit where you have?

A: One of the most important things I learned at Whitman was to consider everything in terms of problems and solutions. It wasn’t “here’s the exact task I was trained to do in college.” I learned how to look at big picture problems and come up with creative strategic solutions. I learned how to think, learned how to write. How to have difficult conversations in open, respectful ways. Whitman opened up a whole new world of opinions and ideas and perspectives that I’d never been exposed to before. The acceleration of my growth as a thinker and a doer were out of this world.”

Q: Do you have advice for Whitman students who want to make positive change in the world?

A: If you see a need in your community that’s not being filled or you feel could be filled differently, I think the most important thing to do is to just make the decision to act. It’s so easy to get caught up in the idea that you need to be an expert in something. That you need to have the resources to make an impact. The most important thing that you can do is just decide. All of those things you need — the research, the people — all of that comes after, not before, that moment you decide to act. It’s just about making that first move.