Combining Passion and Patience for Art

Ikigai, 生き甲斐, is the Japanese term for a reason to get up in the morning — a passion, a purpose, something one lives for.

For Assistant Professor Akira R. Takemoto, his ikigai is learning about and sharing Japanese literature, art and aesthetics with his students and anyone interested in understanding more about Japanese culture. 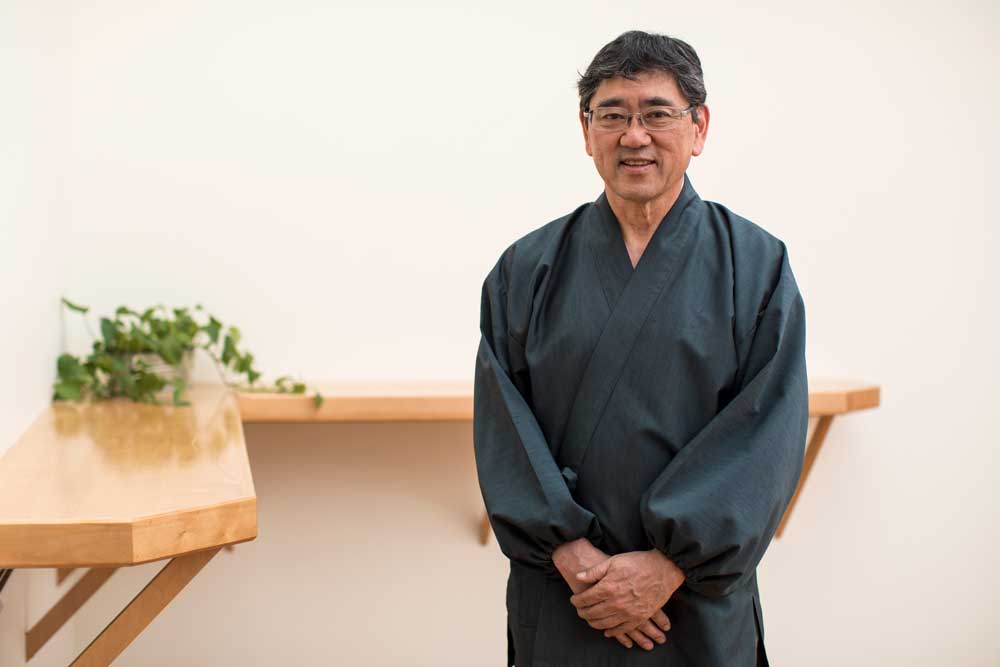 Takemoto has been sharing that passion with Whitman College students and the Walla Walla community since 1983. He began learning the art of serving tea, or chanoyu, in 1978 and trained at the residence of the Grand Master of the Yabunouchi tradition of tea in Kyoto, where he received utensils and certification in 1981. In 2009, he collaborated with architect James Stenkamp to build the Chikurakken tea room on the Whitman campus.

Now after 35 years at Whitman, Takemoto wants to introduce another aspect of Japanese art and culture: Mokuhanga.

Mokuhanga is an ancient art of woodblock printing used for centuries in China and brought to Japan during the Edo period, between 1603 and 1868. It was a period of economic growth for Japan, known for its strict social order, an absence of war, and a zeal for arts and culture.

Mokuhanga was a way to print sutra texts and secular books, but also to produce art.

The method continued to be used for art even as moveable type and other forms of printmaking became more prominent. 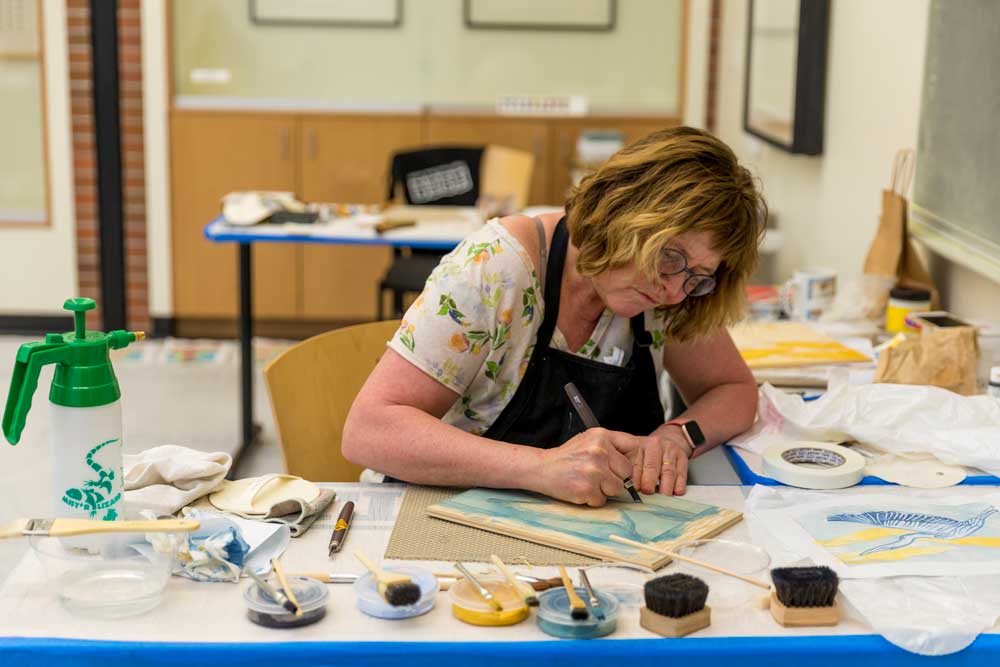 Rebecca Thvedt works on her carving during the 2018 mokuhanga workshop.

Takemoto and Professor of Art Emerita Keiko Hara curated a mokuhanga exhibit in the Sheehan Gallery in 2014 to highlight how traditional Japanese woodblock prints influenced and inspired American printmakers.

“Normally when people hear the word ‘woodblock print,’ they remember the pictures of the floating world — ukiyo-e — that appeared in the Edo period,” Takemoto said. “What we wanted to say was ‘Yes, the woodblock images presented the aesthetics and the sensual pleasures of the Edo period, but mokuhanga didn’t stop there.’”

The Abstract American Mokuhanga exhibit received positive reviews around the world and caught the attention of the Ministry of Education in Japan, which granted Takemoto funds to develop a woodblock center at Whitman College. With the grant, Hara and Takemoto organized Whitman’s first Mokuhanga work-shop in the summer of 2015, taught by Yasu Shibata, a master printer at Pace Graphic Center in New York. In 2016, they invited master carver Shōichi Kitamura from Kyoto to teach an advanced workshop in carving and printing techniques. The weeklong 2018 workshop attracted artists and enthusiasts to Whitman and Walla Walla from across the country.

All About the Details

With mokuhanga, passion and patience becomes an art form in itself. Mokuhanga begins with a plank of wood. Using a set of carving tools, the image is meticulously etched into the wood block. The image is drawn onto washi, a type of Japanese paper. The artist then paints the wood carving with the first layer of colored ink. Then the washi is glued to the wood carving using a bamboo glue. The artist uses a flat hand-held tool called a baren, which is traditionally constructed from bamboo leaves, to press the paper and inked wood block creating an impression. The process is repeated several times in order to create the print. 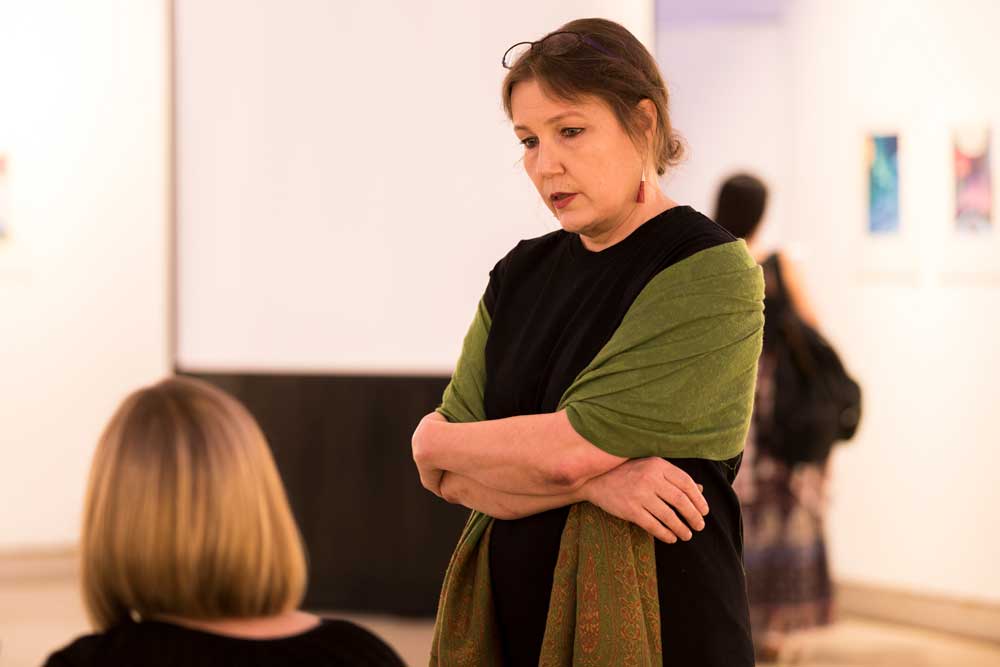 Artist Tuula Moilanen speaks with a visitor during the opening of her exhibit "Hooves on the Move" in the Sheehan Gallery.

Mokuhanga artist Tuula Moilanen came to Walla Walla to introduce basic woodblock print skills to the 2018 summer work-shop participants. Moilanen lived in Kyoto, Japan, for over 20 years and is known around the world as an expert in mokuhanga. She moved back to her native Finland in 2012. As part of the workshop, Hara and Takemoto curated the exhibit “Hooves on the Move” in the Sheehan Gallery, which featured Moilanen’s prints along with work by participants of previous workshops, and prints by Yoshida Hiroshi that were gifted to Whitman College in 1960 by Alice Tompkins Fee.

The exhibit also included work created during the 2016 and 2017 mokuhanga workshops.

“It’s just a window into Japanese culture, Japanese aesthetics,” Takemoto said. “You won’t understand everything. But you can see how all the work in the gallery echo each other in terms of ideas, in terms of techniques, and that’s what I’m interested in.”

Participants for the 2018 workshop came from as far away as North Carolina, Washington, D.C. and Pennsylvania, and as close as Walla Walla and Seattle.

Each morning of the June workshop began in the Chikurakken tea room. After breakfast, the participants would get hands-on instruction from Moilanen and spend the day working on their print. 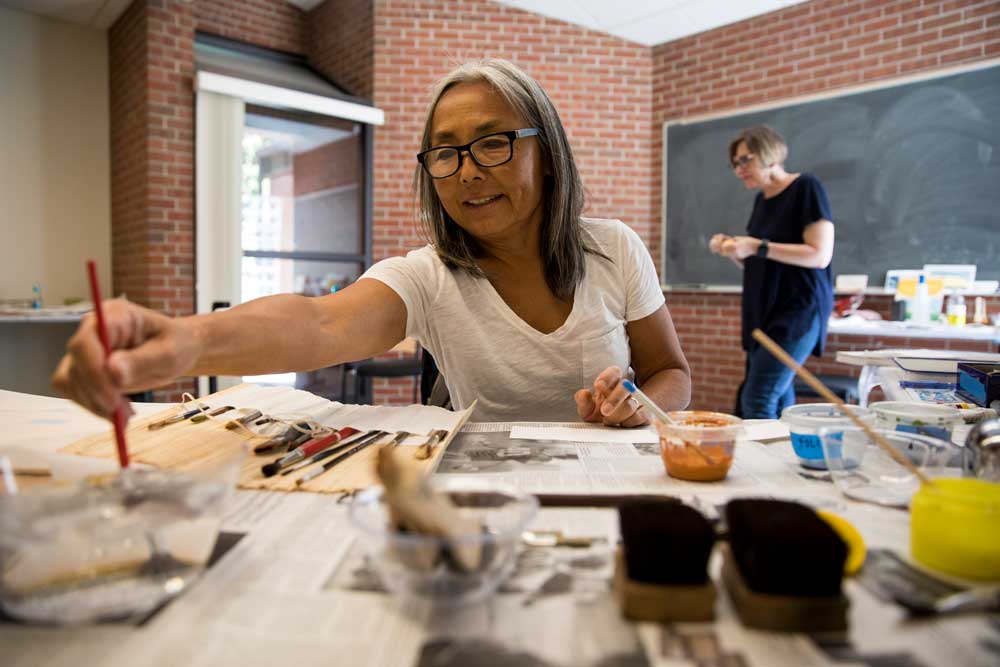 Meredith Yasui works on her mokuhanga painting during the workshop.

For many of the 15 workshop participants this was their first time trying mokuhanga, like Emily Clanton, a painter and mixed media artist from South Carolina. Although she had studied Japanese painting before, one of the draws of taking part in this workshop was the opportunity to learn from Moilanen.

“All the information focuses on the physicality of the work, so you can remember how to do it when you get home,” she said.

Robert Wight, from Washington, D.C., became interested in mokuhanga when he fell in love with Hara’s work. During the workshop, he chose to carve one of Hokusai’s famous images of Mount Fuji. The most difficult part was carving the sun into the wood block, he said. Robert isn’t just a fan of Mokuhanga, he’s also a fan of Walla Walla.

As the workshop ended, the participants left a piece of themselves behind, as each donated a print to the college’s Mokuhanga Collection.

As part of the week’s events, Takemoto hosted a tea gathering ceremony. About 20 people attended the event. For the ceremony, Takemoto was assisted by Whitman alumna Kristina Roy ’18 as they served Omoto Noriko, who served as a Japanese language assistant at Whitman College from 2008-2010 and studied tea with Takemoto. 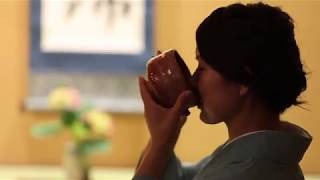 After the ceremony, Takemoto answered questions from the participants and bridged the experience of serving tea with the experience of creating wood-block prints. Each discipline requires physical movements that are intentional, spontaneous and patient, he said.

“I wanted to provide the participants with a way to see the connections between serving tea and making a woodblock print, and many of them said, ‘That was fun,’” Takemoto said. “It was fun for me too, because I wanted to help them see and think beyond what they were learning and beyond the pressure to produce a print by the end of the week.”

Mokuhanga involves repetitive steps and takes a tremendous amount of patience. Takemoto said he hopes the lessons learned in creating a woodblock print will also help participants appreciate every act that they perform in their lives.

“Mokuhanga, or any art, is about touching the universe,” Takemoto said. “How do we interact with the universe? The more we see and touch and engage with the world around us, the work of art becomes more interesting and certainly more alive.”