For Nathan Kruger ’19, growing up in the San Francisco Bay area put issues around homelessness and mental illness on the top of his radar.

Now a senior studying psychology and film and media studies at Whitman College, Kruger jumped at the opportunity to spend his summer break diving deeper into social justice issues.

During his junior year at Whitman, Kruger worked as a teacher’s assistant making videos. The experience awakened a love for storytelling and video making. That’s why he pursued an internship as one of 11 Whitman students who spent their June participating in the inaugural session of the Rural American Digital Laboratory (RADLab), a collaborative digital storytelling workshop.

“I have always been interested in many social issues being faced in America,” Kruger said. “However, I knew very little about rural America or the town where I go to school. I figure this could be a cool opportunity that encompassed all these things.”

The brainchild of popUPjustice founder Aurora Martin, RADLab strives to use digital platforms to highlight the untold stories of the rural communities in Washington. The program partnered with students from Whitman and Heritage University in Toppenish, Washington. 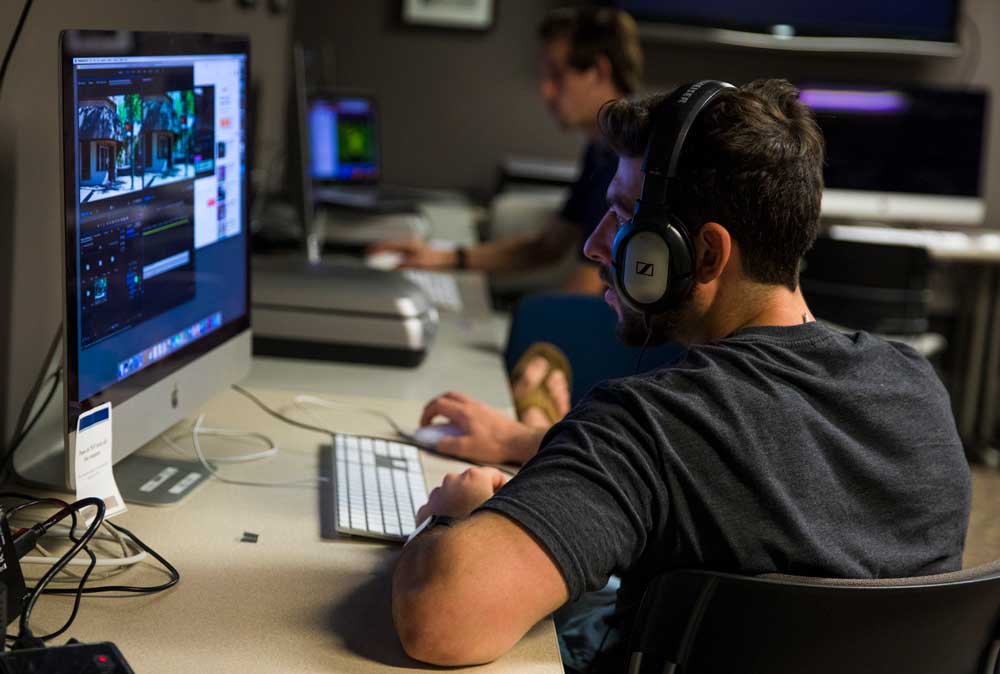 Nathan Kruger '19, psychology and film and media studies, edits his multimedia project on homelessness during the RADLab workshop in June.

RADLab aims to serve as a virtual bridge connecting ideas, knowledge, culture, civic engagement and economic development through transcending geographic barriers and ensuring the next generation of voices within these communities will be heard and represented in the digital age.

“When we began forming our work group between Whitman and Heritage, we were encouraged to pursue the project by Provost Alzada Tipton from the beginning, and so I was able to meet with faculty, meet with students, as well as with the diversity and inclusion task force to share about RADLab and obtain input about the concept,” Martin said.

RADLab focused on giving a voice to the underrepresented voices of rural Washington. The Whitman students divided into three groups, each selecting a topic that was meaningful to them.

Kruger’s team used film to explore homelessness and how it’s intertwined with mental illness and addiction. For Kruger these issues have an indelible imprint that is tied to his view of the world.

“Growing up in the Bay Area, homelessness has always been very close to home,” he said. “Having close personal connections with both mental illness and drug abuse, as well as having studied both, I have been particularly interested in the possible connections between them and homelessness.” 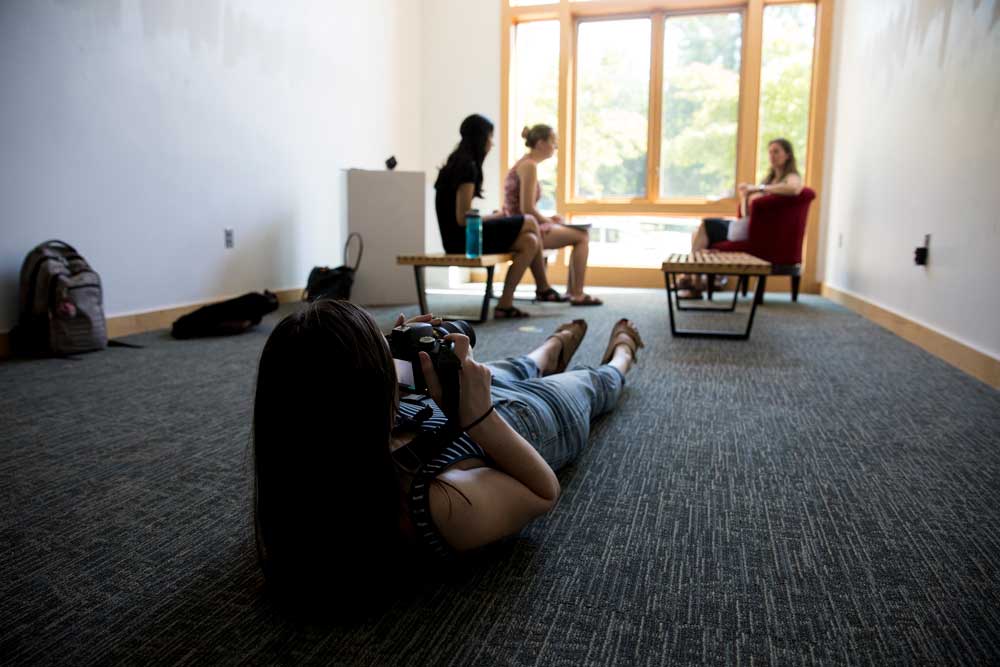 Amara Garibyan '20, politics and film and media studies, documents her group during an interview for their documentary on women's health.

Emma Gregorie ’19, a senior religion major, had an equally personal journey with RADLab. Gregorie’s team chose to tackle the topic of access to health care for women. As a resident of Walla Walla, she has a deep connection to this issue.

“Personally, I have struggled to access women’s health care in Walla Walla at times,” Gregorie said. “I recognize that I am privileged in that I have good health insurance and a reliable primary care physician, but I realize that health care is not something to be taken for granted in my community. Too many women in rural communities struggle to access and pay for potentially lifesaving services.”

During the workshop, the students participated in learning sessions over video conferencing, as well as traveled between the Whitman and Heritage campuses.

Under the guidance of Noah Leavitt, director of the Student Engagement Center, and Maggi Banderas ’05, associate director of the Intercultural Center, Whitman students conducted interviews, developed narratives and learned how to synthesize the information into a visual and digital platform. Students also received mentorship from outside experts who assisted in guiding their projects. 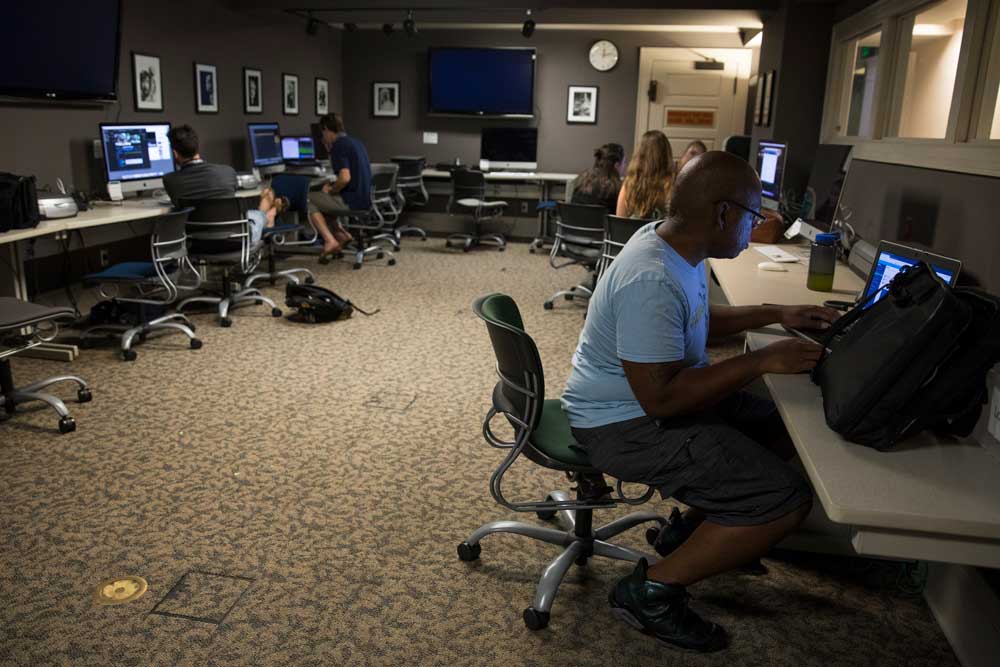 “We had three incredible experts teaching about filmmaking and podcasts, and we had student teams taking all of this information to create stories that are compelling, maddening, worrisome, intriguing and vital,” Leavitt said.

For her part, Gregorie has developed an interest in nursing. In spring 2018, she studied at a health practice and policy program in London. After participating in RADLab, she’s more committed to pursuing the health field after graduating in spring 2019.

“After beginning this documentary, I know that in the future I want to get a master’s in nursing with a specialty in midwifery,” she said. “I believe expanding the role of the midwife in underserved communities can greatly improve a woman’s access to health services.”

Kruger hopes that his work with RADLab will help to eliminate the shame that individuals facing homelessness and mental health issues have to endure.

“My hope is that through sharing people’s stories we will be able to assist them in this transfer of knowledge, giving them a voice and a platform that they didn't have before to produce change,” he said.

For Kruger, his time with RADLab has become part of a larger experience that will follow him once he leaves Whitman’s campus.

“I think that this project will continue to change how I look at the community I am in,” he said. “Hopefully this will continue to produce passion within me to work toward a more healthy society.”