Those who know Dr. Doug Corey ’72 describe him as a humble, honest man — a straight shooter.

He’s the type of guy who prefers to kick around the horse barn in dusty boots and a Western hat, but who will put on a sharp tux for a black-tie event and impress everyone with his cowboyish charm.

He’s also the type of guy who makes change happen.

The Whitman graduate has committed 40 years to protecting the well-being of rodeo livestock. Recognized as a national authority on animal welfare, the veterinarian has garnered many honors for his contributions to the sport, including a prestigious spot in the ProRodeo Hall of Fame.

“When I was in vet school, they didn’t teach the terms ‘animal welfare’ and ‘animal rights,’” Corey said. “The first time I heard those words was from a young bull rider. He said, ‘We really need to work on these animal welfare issues now, because they are going to become even bigger issues.’ I didn’t know what he was talking about at the time, but he was right.”

In 1981, Corey joined the newly formed Professional Rodeo Cowboys Association (PRCA) Animal Welfare Committee, taking a lead role in crafting the national guidelines and regulations for the care and welfare of rodeo livestock. He authored “A Guide to Veterinary Service at PRCA Rodeos” and traveled the country lobbying for rule changes and educating the rodeo and public.

The PRCA now has more than 60 animal welfare rules, including the requirement for an on-site veterinarian and a livestock ambulance at every professional rodeo.

“It used to be there were always ambulances and medical staff for the people, but never for the animal-athletes,” he said. “It was a big deal to make that happen.”

Corey has remained an active volunteer in the PRCA over four decades. Each December, he spends two weeks at the National Finals Rodeo in Las Vegas as the media spokesperson on animal welfare issues.

In 2007, he was recognized for his leadership in animal welfare with the highest honor in the rodeo industry: He was the first — and remains the only — veterinarian inducted into the ProRodeo Hall of Fame.

“It was the ultimate honor,” he said. “There were so many people throughout the country who played a part in developing all of these guidelines. I share the honor with them.”

In 2011, the American Association of Equine Practitioners honored Corey with the Distinguished Life Member Award. He was also named Oregon Veterinarian of the Year in 1997.

“I really enjoy the Western lifestyle and want to keep those Western traditions alive,” Corey said. “I truly believe the welfare of these animals is one of the biggest challenges to continuing that heritage.” 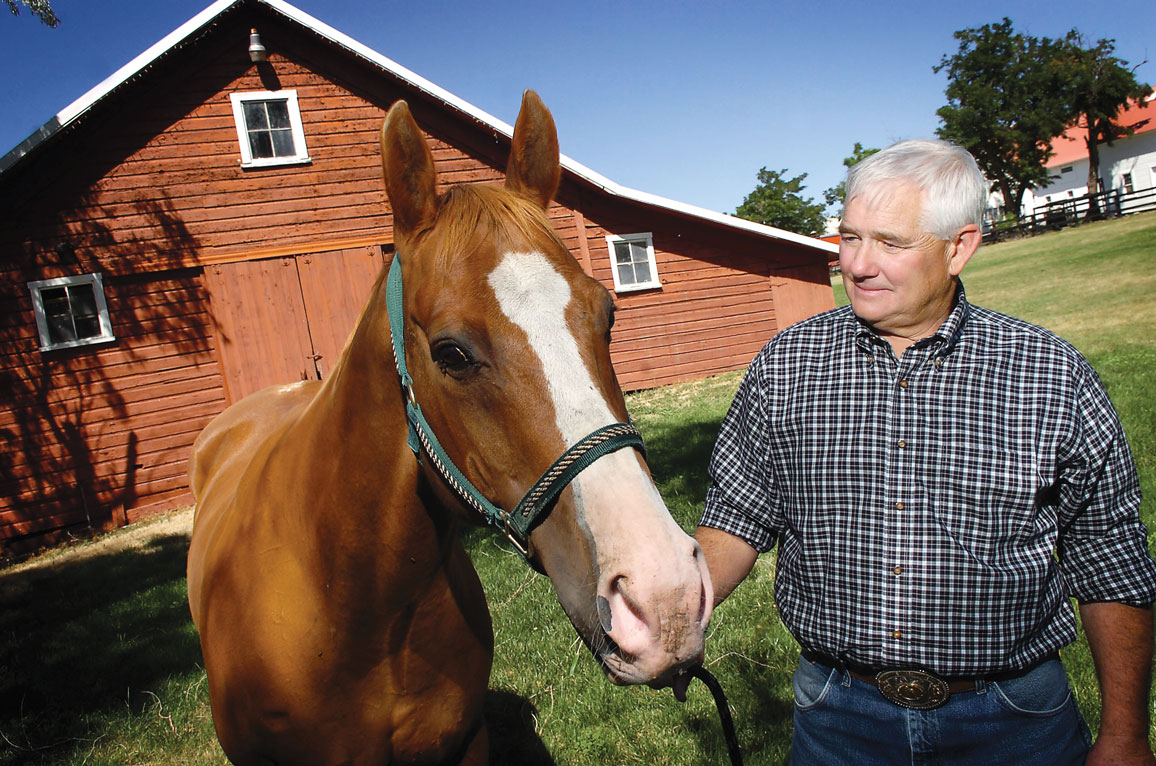 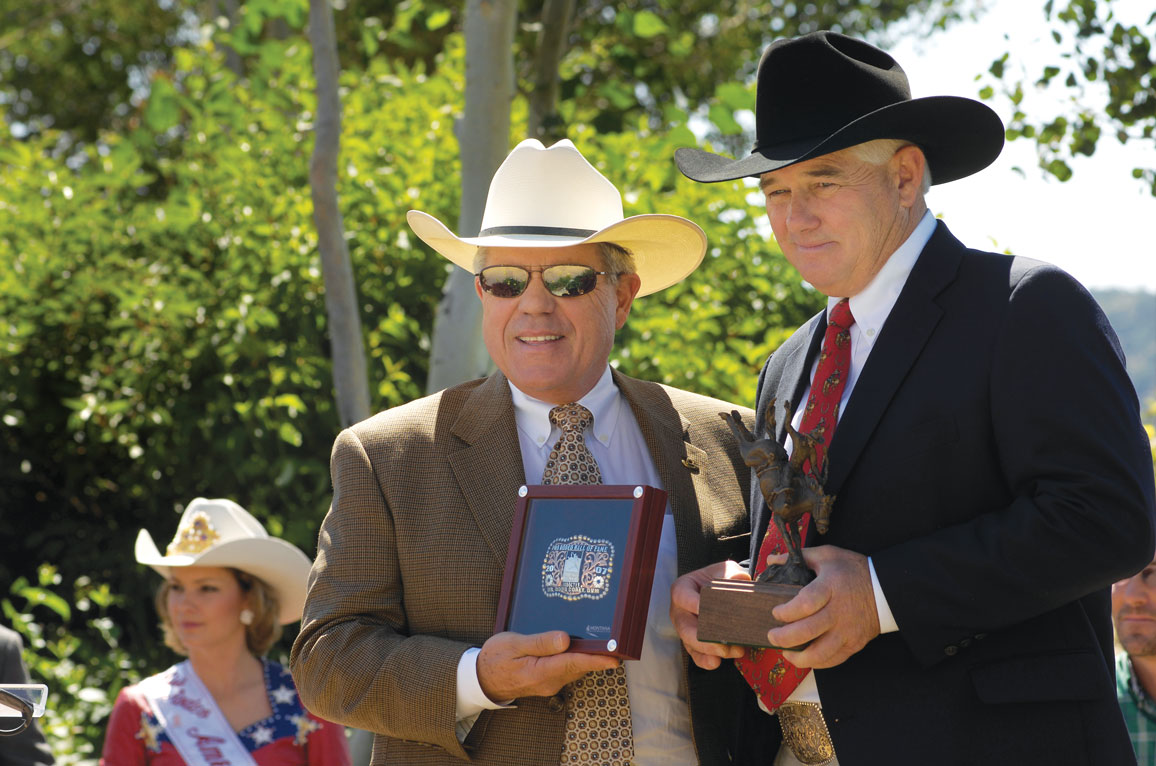 Pendleton Round-Up veterinarian Doug Corey ’72 and his horse Badger at Corey’s home outside of Adams, Oregon. Photo by E.J. Harris; courtesy of East Oregonian. (right) Corey was inducted into the ProRodeo Hall of Fame in 2007 for his dedication to animal welfare. Handing Corey the belt buckle is Keith Martin, the commissioner of the Professional Rodeo Cowboys Association at the time. Photo courtesy of ProRodeo Cowboys Hall of Fame

Growing up on a large cattle and sheep ranch, Corey formed an affinity for working with large animals at an early age. While at Whitman, the biology major considered medical school, but his heart steered him in another direction.

“Whitman gave me a very good background for moving on to that next degree,” he said.

He earned a Doctor of Veterinary Medicine from Colorado State University in 1976, then returned to Eastern Oregon to join the Associated Veterinary Medical Center in Walla Walla. Now semi-retired, Corey still tends to his beloved equine patients.

“Horses are extremely incredible animals, and to be part of their lives and take care of them on a daily basis has been something truly special,” Corey said. “There hasn’t been a day it felt like work.”

While Corey is well-known on the national rodeo circuit, he’s also a celebrity around his hometown rodeo: the Pendleton Round-Up. Thousands of competitors and fans flock each year to the annual weeklong event in September.

“In Pendleton, there are two times of year: before the Round-Up and after the Round-Up,” Corey said.

Corey, a Pendleton native, has been a part of the Round-Up since he was a child. He is a past president and member of the Round-Up board of directors, and he volunteers as the rodeo’s on-site veterinarian.

His wife Heather, who died in 2012, also had a long history with the event: She was the first woman named to the Round-Up’s board. Their daughter, Cydney, and son, Bobby, now hold Round-Up leadership roles.

“It’s always been an important tradition for our family, and it’s important to the economy of our city,” Corey said.

Corey and friend Andy McAnally started another annual event that has become a boon to the Pendleton economy: the Pendleton Whisky Music Fest. Now in its fourth year, the event has featured sold-out shows with headliners Zac Brown Band, Maroon 5, Blake Shelton, Pitbull and Post Malone.

“We wanted to bring the best entertainment to Pendleton so people could see great entertainers without having to go to a big city,” he said. “It was a crazy idea, but so far it seems to be working.”

Corey credited his education at Whitman for providing not only the foundational skills to put his passions into action, but also the perspective to spur change on both local and national levels.

“Whitman gave me a well-rounded education that shaped my mind and opened my eyes to a lot of different viewpoints and opinions,” he said. “It genuinely made me a better person.”

Seattle-Area Neighbors and Whitties Take on the Pandemic Together