“Advice implies that you tell them what to do and that they are going to do it,” he said.

What Dow does, he said, is mentor.

Dow can often be found on the couches in Reid Campus Center, his proclaimed office. Here he meets with many of his mentees, checking in on how they are coming along with their goals and internship plans. He gives encouragement and helps make connections between the students’ interests and his own professional network.

“My role is to provide perspective and some of my experiences,” he said. “When you see the passion, you feed that by getting them to the right connection. And then you sit back, smile and watch what happens.”

Dow sees himself as an intermediary in a network of connections. He keeps his list of contacts up to date so he can pass Whitman students along to professionals in their fields of study and job interests.

Dow knows the hard work, dedication and passion of the Whitman student and the value they bring to the workplace. He was a Whitman student himself, graduating with a degree in psychology.

He came to Whitman as a first-year student and played on the football team in the late 1960s, though his family’s roots trace back much further. During the 1890s, his grandfather, Allan B. Dow, was the head of Whitman’s Music Department. In 2014, Dow and his family gifted a piano to the college in his honor.

When asked what steered him to Whitman, Dow chuckles, remembering the doubts his high school guidance counselor expressed about his chances of being admitted due to the high academic expectations.

“Choosing Whitman College turned out to be one of those wonderful life choices that set me up for years and years and years of connections, fun and meeting incredible people,” Dow said.

Dow has never really left the college community. After Whitman, he pursued teaching, first in Boston and then on the West Coast. He taught chemistry in the Bainbridge Island School District for 30 years.

Now retired, Dow shuttles between homes on Bainbridge Island, Walla Walla and Manzanita on the Oregon Coast. He bridges the academic worlds between Bainbridge and Walla Walla by encouraging students from Bainbridge High School to attend Whitman. He also connects Whitman students with employment opportunities and internships in the greater Seattle area.

In 2014, Dow and his wife Natalie Meacham established the Dow-Bainbridge Scholarship Endowment, which helps offset the cost of textbooks and supplies for Bainbridge High School students attending Whitman. Dow hopes that by covering some of the basic expenses of students, he can make a Whitman education more accessible and affordable. 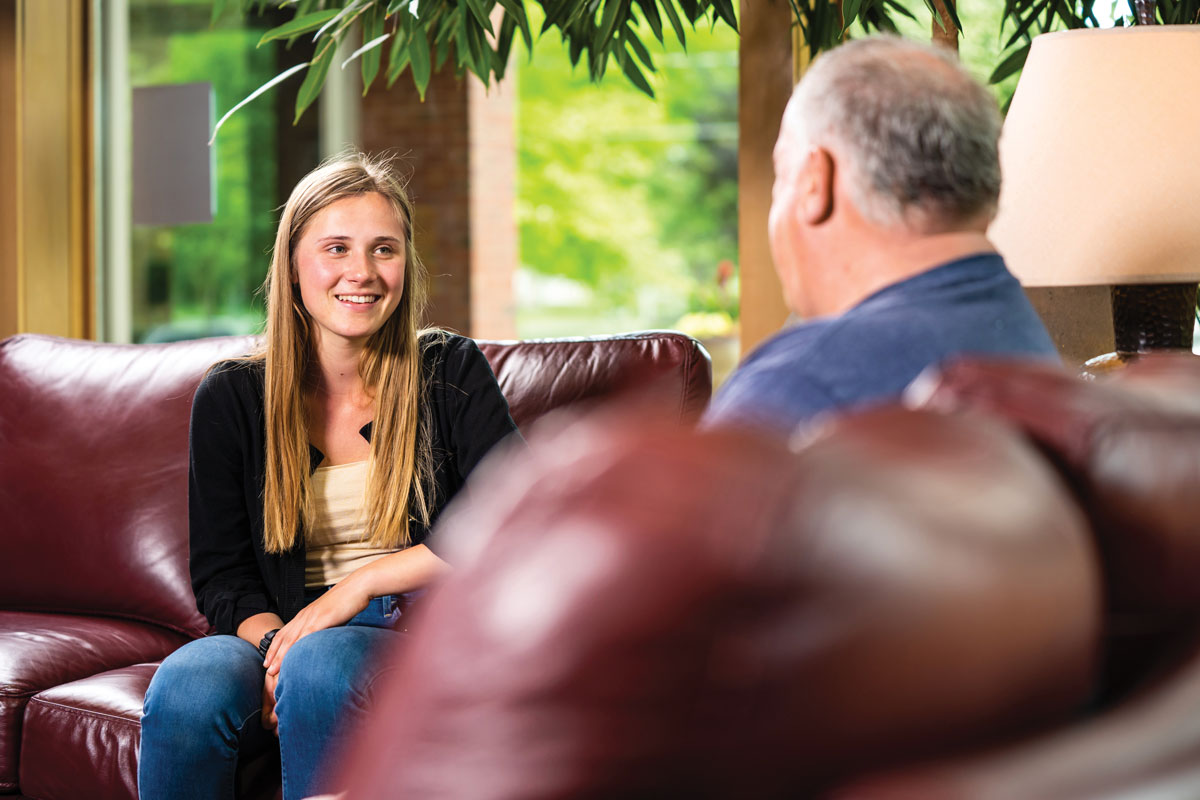 Alumna Signe Lindquist ’18 grew up on Bainbridge Island and was encouraged to attend Whitman by Dow. A double major in Spanish and sociology-environmental studies, Lindquist met with Dow frequently throughout her time at Whitman. She currently works as a program instructor for YMCA Earth Service Corps in Seattle. Dow continues to connect Lindquist with current Whitties interested in jobs in environmental education.

“He gives us support. He shows that he is really listening to you. He’s helped me figure out what I want or need in a more independent way while providing contacts or resources. He won’t take much credit for all the ways that he’s given Whitman students confidence, opportunities or peace of mind, but that’s the result of his mentorship style,” Lindquist said.

Dow invited Zwicker to give a presentation at Whitman about her work in hopes that she would connect with students and bring them to Peru as part of the Whitman Internship Grant. Rhodes attended Zwicker’s talk and jumped at the chance to participate in the trip.

Since returning from Peru, Rhodes has regular meetings with Dow at his Reid “office.” Rhodes is grateful for the time Dow spends with him.

A passion for giving back drives Dow’s ongoing contributions to the Whitman community. In addition to his countless friendships, mentorships and connections with students, faculty and alumni, Dow is an alumni admission representative and has served on the alumni board. He is also a member of the President’s Advisory Board and the W Club board.

“The Whitman community has done such wonderful things for our students,” Dow said. “It’s a way for me to pay back the college for the good that they have done for the people that I love.”