Secrets of the Deep

Biology Prof. Paul Yancey has captured the attention of National Geographic as he prepares to embark on an unprecedented exploration of the deepest known area of the ocean, the Mariana Trench. 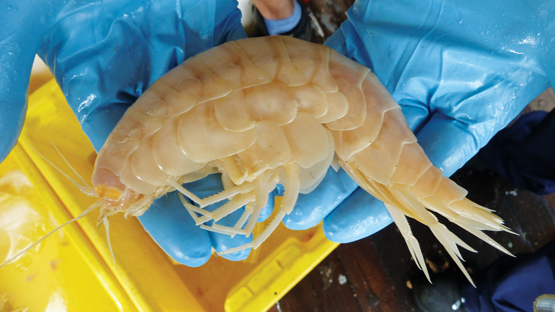 Typically, deep sea amphipods – relatives of potato bugs – are under an inch long. But during a scientific expedition to the Kermadec Trench north of New Zealand, Mackenzie Gerringer ’12 helped drop fish-traps that brought up this 11-inch specimen. (Photo courtesy University of Aberdeen, UK) 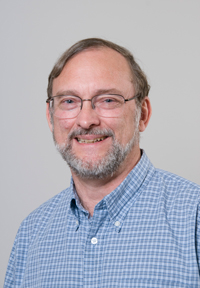 One fundamental question haunts scientists studying the world’s oceans: What creatures lurk at the bottom of the sea?

“Only 1 percent of the deep-sea has been explored,” said Paul Yancey, professor of biology and Carl E. Peterson Endowed Chair of Sciences.

By “deep sea,” the Whitman professor is talking about the hadal trenches. At 36,000 feet below the surface, these trenches are considered to be the deepest spots in the ocean – the very bottom of the sea.

Yancey’s extensive knowledge of the adaptations of animals to pressure in the deep sea helped him garner a $93,891 grant from the National Science Foundation, enabling him to further his research into what strange animals survive in the ocean’s outer dark.

Mackenzie Gerringer ’12 holds a supergiant amphipod she retrieved from a fish trap in the Kermadec Trench. 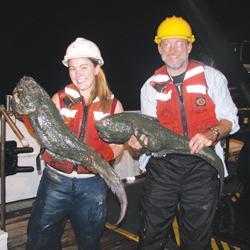 Using nets, Yancey and Laxson caught this crab from a depth of 7,000 feet in Monterey Bay. (Photos courtesy of Paul Yancey)

“We don’t know what we will find, but we are bound to discover new species,” Yancey said. “Due to the tectonic forces at trenches, we may find an oasis of life living off energy-rich minerals being extruded from the earth.”

Over the years, Yancey has fished out his fair share of surprising species from the seemingly endless ocean, the aquatic animals looking like creatures straight out of a B horror film.

Recently, New Zealand’s National Institute of Water and Atmospheric Research, which is collaborating with Yancey’s grant team, sailed a 90-foot research vessel to the Kermadec Trench north of New Zealand to conduct a preliminary survey, with “dropcams” and fish traps, that will help chart a course for Yancey’s upcoming expedition. The crew, including Mackenzie Gerringer ’12, witnessed a surprising discovery – an 11-inch amphipod, the largest such animal ever captured.

“We were pretty much breaking records,” said Gerringer, who conducted research for Yancey, her professor, while spending 12 days aboard the vessel Kaharoa. “Even the crew got excited. The crew isn’t all scientists,” she noted, “but they like breaking records, too.”

Gerringer said that the importance Whitman places on intellectual curiosity prepared her for the scholarly adventure. Few colleges offer experiential learning opportunities like Whitman does, she said, where an undergraduate biology student has the chance to actually sail above the deepest parts of the ocean and drop fish traps.

While an 11-inch amphipod might not seem spectacular, think about its relatives: a nearly microscopic sand flea, or a tiny potato bug flicked from underneath a rock. The record-breaking amphipod belongs to the same group, and, at 12 times the size of a normal potato bug, dwarfs its puny cousin.

What other surprising discoveries might be awaiting Yancey and his team? Scripps Institution of Oceanography recently set dropcams into the Mariana Trench and found a one-foot amoeba. This single-celled organism is a giant compared to the pseudopodia examined beneath the microscope in your high school biology class.

“An amoeba this big is incredible. It’s the largest one-cell organism we know of,” Yancey said, before wondering rhetorically, how a single-cell life form can grow so large.

Organisms that develop this large lend credibility to the theory of gigantism, which proposes that species inhabiting isolated areas can grow and grow, not bothered by predators or pollution.

Finding unimaginable species is what excites Yancey about his future expedition to these deep-sea trenches, which he explains are secluded from the rest of the seabed, sort of like remote islands supporting sequestered ecosystems. Exploring these untouched, cavernous regions 36,000 feet below the surface of the ocean is akin to stomping around the Galapagos Islands, recording the behavioral habits of the aboriginal species flourishing in the absence of predators.

“The environment of these trenches is what Charles Darwin witnessed when he went to the Galapagos Islands,” Yancey said. “The trenches are disconnected from the rest of the sea, so life there might evolve differently.”

So is Yancey a modern-day Darwin studying the evolution of the species?

“No,” he said, laughing at the comparison. “But I feel privileged, because on Earth, the deep sea is the last frontier. It’s like going into space.”

Yancey’s upcoming voyage to the undiscovered frontiers is called Project Hades (for Hadal Ecosystem Study). Not only did his project attract the National Science Foundation, but National Geographic is interested in a potential television special about the history-making expedition. 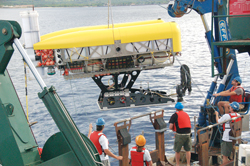 “We are excited about National Geographic’s involvement, because one of our mandated missions is public education,” Yancey said. “During the expedition, we will broadcast by satellite live to schools all over the world and via the Internet.”

The NSF grant Yancey received is part of a larger grant involving collaborators from Woods Hole Oceanographic Institution and the University of Hawaii. Yancey, his students and fellow collaborators will survey the deep-sea habitats around the Kermadec and Mariana Islands, volcanic arcs located north of New Zealand and east of the Philippine Sea, respectively. The Mariana Trench is the deepest trench in the world.

Unlike previous research expeditions, Yancey and his team will explore these alien environs with Nereus, a unique hybrid remotely operated vehicle named for the Greek sea titan who has a man’s torso and a fish tail. Nereus is the world’s only sub capable of exploring and operating in depths of such crushing pressure.

“With a robot like Nereus, we can now explore virtually anywhere in the ocean,” Andy Bowen, project manager and principal developer of Nereus at the WHOI, told the BBC after the sub’s maiden voyage to the Mariana Trench in 2009. “I am absolutely certain Nereus will enable new discoveries. I believe it marks the start of a new era in ocean exploration.”

On the debut descent of Nereus, the deep-diving vehicle, weighing in at about three tons and measuring roughly 14 feet long and eight feet wide, reached the point on the Mariana Trench named Challenger Deep – the deepest-known spot on Earth. If you were to drop Mount Everest into the ocean there, the summit would disappear more than a mile beneath the waves before reaching the bottom of the sea.

To withstand the pressure of the deep, which can reach more than 1,000 times the atmospheric pressure at the Earth’s surface, WHOI engineers adapted fiber-optics developed by the Navy and rigged it to Nereus. Engineers also developed a hydraulically operated, lightweight, robotic manipulator arm capable of operating under intense pressure. The arm allows Nereus to collect biological and geological samples.

So exactly what type of biological samples do scientists like Yancey hope to find hidden in the deepest canyons on earth, at bone-crushing depths?

“Something big,” he said, his eyes growing wide beneath his circle-framed glasses. “Not a giant six-foot monster, but something large by normal standards. The sea floor contains stuff people don’t know exist.”

Yancey points to a mountain range rising up from the bottom of the sea beneath the coast of Antarctica. The range of mountains is as big as the Cascades in size and shape yet was only mapped in 2011.

“We have better maps of Mars than of the deep sea,” he acknowledged.

Like space exploration to celestial planets, many scientists yearn to journey to the bottom of the ocean just to find out what’s there. But Yancey’s voyaging isn’t blind adventure fueled by nothing more than wild imagination. Yancey uses his research quests to exercise his students’ imaginations. With photos and never-before seen video of the undersea, he turns his classroom into a portal to another world.

During the past 25 years, Yancey has taken more than 30 students on deep-sea research expeditions across the globe. Two of his Whitman students had the extremely rare opportunity to descend 7,500 feet aboard the ALVIN submersible to survey the ocean’s hydrothermal vents.

“Conducting pioneering research keeps me enthusiastic about teaching. I can’t wait to show my students the amazing new things we discover,” Yancey said.

Part of the grant funding this trip to the Mariana Trench includes a stipend for student research that will enable select thesis students, such as Gerringer, to study growing evidence that Yancey suggests reveals that hadal trenches play a major role in recycling carbon and other elements, and may therefore influence climate.

The sub’s trip to the Mariana Trench will “give us important knowledge about the planet. We want to look for organisms, but we also can gather data on the geology of these deep fault lines,” Yancey said, pointing out that the tsunamis that devastated Indonesia and Japan were born from earthquakes originating in the vast hadal trenches submerged beneath the Indian Ocean and the Pacific Ocean. 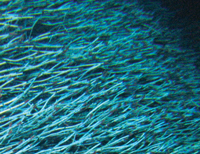 What looks like a field of grass is a colony of 4-foot-long tubeworms that live off hydrothermal vent gases deep below the ocean’s surface. The vents emit hot (750 degrees F), mineral-laden water that provides abundant energy, mostly as hydrogen sulfide, which microorganisms use for energy, forming the basis of the food chain. (Photo courtesy of Paul Yancey)

The waiting is the hardest part for Yancey.

Aside from teaching, the explorer currently spends much of his time finalizing preparations for his expedition, which Yancey hopes will set sail in January 2013. Among other duties, he and his colleagues are coordinating the accompanying fleet of support ships, which includes a medical ship, National Geographic’s ship and the research ship holding the scientists, which most likely will have to undergo modifications in order to transport the Nereus sub.

“I want to go now. It’s nail-biting to have to wait,” Yancey said, referring to the planning stages.

His excursion is an epic undertaking, though, and must be planned to the last detail. Take the cable tethering Nereus to the mother ship. It’s 36,000 feet to the bottom of the Mariana Trench. However, Nereus doesn’t travel straight down. It submerges at an angle. Plus, once it reaches the trench, the submarine will explore in numerous directions. So 60,000 feet of cable, full of communication lines, must be transported, otherwise the crew risks losing the sub.

“Conducting pioneering research keeps me enthusiastic about teaching. I can’t wait to show my students the amazing new things we discover.”
— Paul Yancey

Yancey believes his journey will be unique, because the previous research vessels that explored these deep trenches used dropcams and fish traps. The cameras can only capture one small shot at a time. And it’s all luck as to what critters crawl into the fish traps. As for the first descent of the Nereus in 2009, it only hovered.

“We will be cruising the sub through the canyons of the Kermadec and Mariana trenches,” he said excitedly. “This will make all the difference.”

So who will navigate the Nereus through these underwater canyons?

“People who are good at video games,” Yancey joked. “The company that makes Nereus has pilots. They don’t let us run the multimillion-dollar sub. They’re afraid we might crash it.”

Instead, Yancey and his team of scientists will gather in a big room onboard the mother ship, next to the pilot who operates the sub with a joystick. A camera on the sub relays video to the ship. While Yancey and his team watch the video screen, they will tell the pilot where to maneuver the sub and what creatures to capture with its mechanical arm.

Despite currently being grounded on land and yearning to get his sea legs back, Yancey insists the lag time spent prepping for his expedition to the bottom of the sea will be worth the anguish of waiting.

“Exploring the ocean’s deepest trenches is the equivalent to sending rovers to the surface of Mars,” he said. “The potential discoveries tempt the mind to dream.”