Living by the wind

Lindsey Bloom ’01 is busy. One of the few female fishing boat captains in Alaska, she nets sockeye salmon each summer. Off-season, she’s boot deep in conservation work, leading the fight against a multinational mining project that could potentially destroy Bristol Bay’s commercial fishery, a resource generating more than $300 million annually. All this, and she recently had her first child. 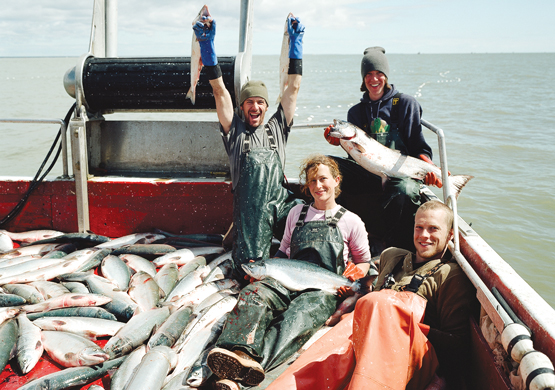 Amid a good haul of salmon, Lindsey Bloom ’01 and her crew pose on her boat in Bristol Bay. (Photos courtesy of Corey Arnold)

Lindsey Bloom ’01 has fished Alaska’s Bristol Bay since she was 16. But when the Whitman sociology major made the decision to captain her father’s old boat, few of the rugged fishermen who dominate the gill netting world figured she’d last one season.

“When I started, other fishermen assumed I couldn’t do it,” she remembered. “They were saying ‘Give it a year, and she’ll be done.’ Well, six years later I’m still here, and I have my own boat, the Rainy Dawn.”

Bloom’s decision to join the tiny cadre of female captains was born out of pragmatism rather than a rebellious desire to shatter glass ceilings.

“I had to pay for college,” she said, explaining why she started her own fishing operation.

While the need to finance her journey through higher education clearly motivated her, Bloom also welcomed the challenge of breaking the rules.

“When I was younger, there were just a few female captains. I felt I needed to do it. I enjoyed the challenge of overcoming the doubters.” 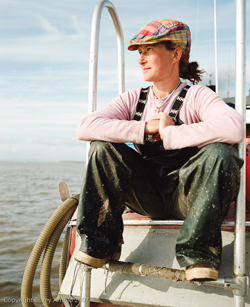 The maverick captain experienced an arduous first year aboard her 32-foot drift boat. Thankfully, back then her crew consisted of two newbies – a Whitman alumnus plus “just another guy I hired in Juneau,” she recollected.

“It worked out well,” she said laughing, revealing that the guy from Juneau is now her husband. “It was good I had two greenhorns, because they didn’t know enough to know I didn’t know what I was doing. We got stuck on every sandbar. It was a mess, but we kept catching fish. That’s how you learn.”

Fishing Bristol Bay can be a mess. During the short salmon season, the pristine bay is crowded with boats, and fishing often resembles a demolition derby, as captains jockey their vessels for pole position in order to be the first net in the boundary line.

Navigating this caravan is made more difficult by the fact that once crews release their nets, captains must drift the bay and cannot be anchored. Captains can’t anchor until the crew slinks in the boat’s net.

“Sometimes we call it combat fishing,” Bloom said, referring to maneuvering through the heavy traffic of boats, all competing for a finite supply of salmon.

Despite successfully captaining her 32-footer through the cluttered and clattering Bristol Bay, some weathered fishermen still refuse to accept Bloom when they see the 5-foot-3-inch, redheaded woman barking orders to her crew.

“I get rude comments from the other boats, but I don’t pay much attention to them,” she said. Though she might not pay attention to their words, she takes satisfaction in outfoxing the crusty fisherman. “No matter what they say, I’m still going to cork them.”

A fisherman can’t succeed without toughness, especially a diminutive woman trying to net more salmon than her cantankerous competitors, hopefully reaching the average 100,000 pounds, which puts fishermen into the black.

“Fishing is unique among everything else in life. You’re out there and your engine breaks down. You can’t Google and see how other people fix it. You either do it yourself, or you’re dead in the water.”

Bloom holds her own in captaining Rainy Dawn. But there’s one fight the self-reliant captain can’t win alone. Pebble Mine. A multinational company is bent on mining gold, copper and molybdenum ore along the watershed area surrounding Bristol Bay. The bounty is potentially worth hundreds of billions of dollars.

Detractors of the Pebble Mine project insist the proposed mine threatens to damage hundreds of miles of open tundra and wetlands in southwest Alaska, a spread of land supporting one of the largest intact salmon habitats left in the world and dozens of native communities, plus myriad wildlife, such as grizzlies, moose, caribou and eagles.

Bloom first learned about the mining project in 2005, having just returned home from graduate school. After reading a brochure on Pebble Mine, she involved herself, figuring the controversy might bring national attention to Bristol Bay, because the region’s salmon is enjoyed across the country.

“I saw this as a tool to help market our salmon, but the more I learned about the mine, the more I got sucked in. It became an issue of social justice. Here was this company coming into an area where people clearly didn’t want it.”

Using the media and organizational skills she learned at Whitman, Bloom began the long struggle to push back against Pebble Mine, a struggle that came naturally to her, because attending Whitman crystallized her devotion to “service and sustainable development,” she said.

Butting heads against powerful mining interests backed by millions of dollars is strenuous. In Alaska, though, the battle is more difficult, because the vast distances between towns makes it harder for opposition groups to organize. The harsh, unpredictable weather also presents its own set of challenges. An obstacle more slippery than the wicked storms, though, is the fact that Alaskans, especially fisherman, define the term “rugged individualism.”

“Fishermen are individualistic people who are difficult to organize,” she said, adding that there’s no organized labor in commercial fishing. “It’s understandable. We’re all competitors.”

But after numerous town hall meetings and presentations, grassroots opposition to the mine – tribal and indigenous communities, commercial fishermen, sports fishermen and the tourist industry – coalesced, thanks in part to Bloom’s leadership.

“Once we made the case as to why we needed these groups to engage in the process, it was a pretty easy sell. Making people aware that the mine was a direct threat to our livelihood, that got people riled up.”

The fight against the mine has crisscrossed many switchbacks, but Bloom thinks this upcoming year marks a profound crossroads, because the EPA is conducting an official assessment of the Bristol Bay watershed to decide if it is indeed a world-class fishery. The EPA’s Draft Watershed Assessment, to be released this spring, also will reveal whether or not the region would be harmed by industrial development.

Bloom is hopeful the Pebble Mine project will be defeated. It must be defeated, she said. “The mine would destroy what is one of the few examples of sustainable resources left on the planet.”

The Bristol Bay watershed provides life to the local residents, and it renews itself over the course of the year in time for yet another summer salmon season. Because she supports her family, which now includes a new baby, with the fish she plucks from the bay’s frigid waters, she believes it’s her duty to help protect this resource. Fishing also feeds her connection to the natural world.

“It’s spiritual to be invested in fish. You live by the wind, tide and salmon. Out here, clocks don’t matter.”