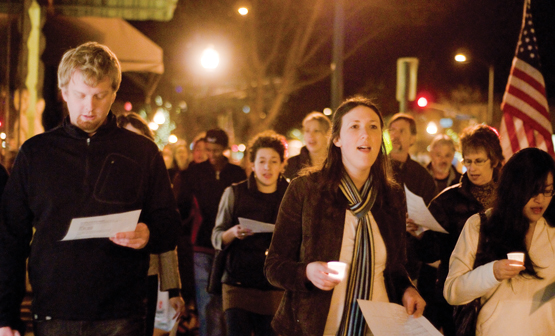 The excitement inside Matt Shaw’s 11th-grade AP language and composition class was palpable. Even at 8:30 in the morning.

Reetz and Ihmoda are history majors who volunteered as student teachers to be part of a pilot program called Whitman Teaches the Movement, born from a partnership among Whitman, Walla Walla Public Schools and the Southern Poverty Law Center, which focuses on civil rights.

The innovative program took place in January 2012 in response to a report released by the SPLC revealing that 35 states received failing grades in terms of adequately teaching the history of the civil rights movement in their public schools.

Washington was a state that flunked.

“It’s interesting what my students don’t know,” said Shaw, who has been teaching at Walla Walla High School for six years. “So it’s nice to have Whitman students speak to my class about civil rights.”

Reetz and Ihmoda were among 100 Whitman students who transformed themselves into teachers by volunteering to lead specially designed, 45-minute lessons about the movement to second-, fifth-, seventh- and 11th-graders in 10 public schools across Walla Walla.

“I like the idea of doing something concrete in the community, because, as a Whitman student, I can teach things that I learned in college, like the civil rights movement, that high school students should also be learning,” Reetz said.

Failure to understand the civil rights movement is dangerous. This was the warning Kate Shuster, a consultant with the SPLC, issued during a lecture she delivered at Whitman, where she was training students to teach civil rights lessons.

The custom-designed, grade-specific lessons included reading a picture book about the Greensboro sit-ins to second-graders; talking to fifth-graders about baseball legend Jackie Robinson; introducing seventh-graders to women of the civil rights movement; and discussing “Letter From Birmingham Jail” with high school juniors.

“History of the movement is a classic American story,” Shuster said. “If public schools continue neglecting this integral period of U.S. history, students will lose sight of what it means to be an American. By being American, we learn what it means to struggle to overcome injustice. It’s how we learn to be human.”

Shuster authored the groundbreaking report, “Teaching the Movement: The State of Civil Rights Education in the United States 2011,” which detailed the declining attention America’s public schools give to the civil rights era.

The report prompted Noah Leavitt, Whitman’s assistant dean for student engagement, to act, and he brought the opportunity to Whitman students, inviting them to volunteer as teachers. Shuster was excited by Whitman’s response, because she believes understanding this turbulent period is vital to our democracy.

Like so many socially conscious Whitman students, Maggie Ayau ’14 wanted to exercise her citizen skills, so the English major signed up for WTTM.

“Whitman students are passionate about so many diverse causes,” said Ayau, who volunteered with fifth-graders at Green Park Elementary School. “Students come to Whitman not only to be taught, but also to make a difference.”

Ayau believes one of the most important aspects of WTTM for her fellow Whitman students was the chance to step into actual classrooms.

“I’ve recently taken up an interest in teaching as a possible career,” she said. “This program offered hands-on teaching experience in a real classroom setting. It was a great way to get my feet wet.” 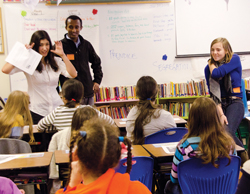 Snow fell hard, and every Whitman student, not just the ones who had signed up for WTTM, literally got their feet wet on the day the innovative program was scheduled to start.

The wintry weather forced schools to close for a snow day, disrupting the pioneering program, for which Whitman students had been preparing for over a month.

“I was bummed classes were cancelled but felt relieved I wouldn’t have to worry about slipping around on all that ice,” said Ayau, who’s from Hilo, Hawaii. “In a way it was good, though, because my teaching partner and I had more time to refine our lesson.”

Though numerous classes had to be rescheduled, Corinne Vandagriff  ’15 pressed forward. She partnered with Ayau on the project, and the double major in gender studies and sociology was glad the inclement weather didn’t “mess up the program” completely.

“Snow wasn’t something I thought about, because I’ve never lived with snow,” said Vandagriff, who’s from Oakland, Calif. “It added an additional challenge in terms of rescheduling, because we were really excited about the project and wanted to make sure it happened.”

Many of the Whitman students doggedly reorganized their plans in order to accommodate the public school teachers, who had to juggle new times to fit the lessons into their syllabi.

“As the history of the civil rights movement reminds us, very few things wind up happening on schedule or in the way that the organizers planned, and that remaining flexible and committed to the big picture is crucial,” Leavitt said.

“The temporary interruption of the program was a good lesson for our students. In my nearly seven years at Whitman, I’ve not seen as much student enthusiasm for a community service project as I have with this initiative.”

A strong service project connects volunteers to their community. WTTM is no different. The Whitman volunteers did more than teach school kids about civil rights. According to WWPS assistant superintendent Linda Boggs, Whitman students sparked the imagination of numerous kids who will benefit by interacting with college role models.

“Having college students as guest teachers provides an opportunity for our students to get a real life glimpse into ‘college,’ as many students, especially younger ones, may know college as a word but not have a clear picture of what it might look like,” she said.

Maureen Costello, head of the Teaching Tolerance Program at the SPLC, who traveled to Whitman from Montgomery, Ala., to kick off WTTM, echoed Boggs’ belief.

“Teaching these lessons raises awareness,” Costello stressed. “These kids will look to Whitman students as role models. Meeting someone who is in college helps them think they also can go to college.

“We want to give kids something to aspire to.”

Many young kids treasured the experience. Because of the lesson on the Greensboro sit-ins, 8-year-old Hadley, a second-grader in Tressa Baker’s class at Green Park, has added the words “segregation” and “college” to her lexicon.

After sitting crisscross applesauce on the floor for 20 minutes listening to Whitney Griggs ’13 read through the picture book “Freedom On The Menu: The Greensboro Sit-ins,” the earnest girl was happy to learn more about the movement.

“It was great to talk about how great Martin Luther King, Jr. was. Some things weren’t fair, so some people were fighting to change the law,” Hadley said, using a child’s straightforward logic to sum up the movement.

After the lesson, the Whitman guest teachers left Baker’s second-graders to their classroom full of cubbyholes, colorful art projects plastering the walls, and desks grouped into fours. Even though second-graders move quickly from one subject to the next, often distracted by something as simple as discovering pizza on the lunch menu, Noah Lerner ’12, who co-taught with Griggs, said the lesson was valuable for the children.

“Whitman students are passionate about so many diverse causes. Students come to Whitman not only to be taught, but also to make a difference.”
— Maggie Ayau ’14

“It will have resonance, at the very least because it was a unique experience for the students to have college students come in and teach them,” said Lerner, a religion major from Lake Forest Park, Wash., who recently accepted a job with Teach For America.

Baker was thrilled to have these Whitman students as guests in her classroom. She said that college students bring different perspectives and experiences to kids, even her second-graders.

“We love our Whitman students. It’s wonderful having the campus so close. We depend on them.”