Into ‘the warm heart of Africa’

Seren Pendleton-Knoll ’09 went from working and volunteering 100 hours a week to appearing on a TV program, where she won a trip to Malawi to deliver babies. 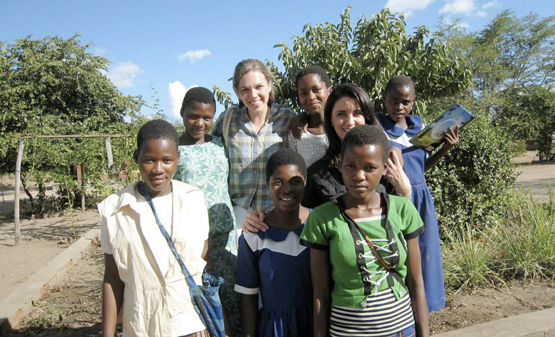 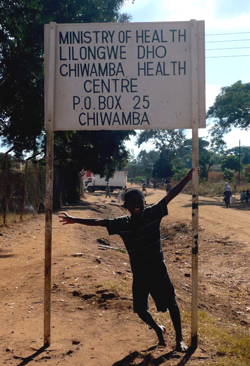 Chiwamba Health Center is the only clinic in all of Lilongwe. 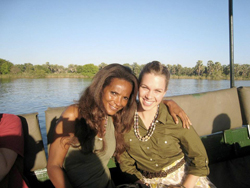 Pendleton-Knoll sits with Dr. Lisa Masterson on a boat that took them back to their camp after a long day at the Nanthomba Primary School.

She was standing in the crowded, dusty shanty of a medical clinic in southeast Africa when Dr. Lisa Masterson, the star of the Emmy Award-winning television show “The Doctors,” directed Seren Pendleton-Knoll ’09 to deliver a baby.

“My first thought was, ‘How can I do this? I’ve never even taken a biology class,’” said Pendleton-Knoll, remembering how Masterson told her not to think about it and to just grab the baby’s head and pull it out.

The delivery was successful, and it was just one of many Pendleton-Knoll assisted during her three-day stay in Lilongwe, Malawi, a town of 70,000 located on the banks of the Lilongwe River, bordering Mozambique and Zambia.

How did it feel to deliver her first child? “The delivery wasn’t so much. But holding the baby afterwards – it was incredible,” she said.

Pendleton-Knoll traveled to Malawi, known as “the warm heart of Africa,” after winning Masterson’s “Africa Challenge” contest. Dr. Lisa, as she’s known on her hit television show, is fighting to help struggling families in underdeveloped countries. The Africa Challenge was part of a yearlong awareness campaign with Girl Up! and the United Nations Foundation.

The contest recruited “female volunteers with a true passion for helping others.” While the TV show received hundreds of applicants, Pendleton-Knoll’s vision for volunteering with teenagers outshined the rest of the contestants.

“I love working with at-risk teens,” she said. “Most of the time they are intelligent and passionate, but many haven’t been provided opportunities to excel. I love to help them realize their own potential.”

Pendleton-Knoll began working with teenagers while majoring in psychology and theatre at Whitman. During her senior year, she took an internship at the Walla Walla County Juvenile Justice Center. While her Whitman education helped Pendleton-Knoll realize her career path, it also prepared her for appearing on national television. 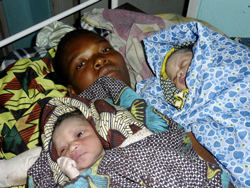 A new mother holds the healthy twin babies that Pendleton-Knoll delivered at the Chiwamba Health Center.

“I wasn’t nervous at all about going on TV. I was a theatre major,” she said, adding that this gave her the stage presence needed to face down the cameras.

Today, Pendleton-Knoll is the program coordinator of the San Mateo, Calif., County Youth Commission, a program of StarVista, which helps teens and adults (aged 14-21) participate in politics. That’s just her day job. She also volunteers as a case manager with an organization called Girls Program, and is on call at three group homes, two for runaway and homeless teenagers, and one eating disorder residential facility for youth.

“I’m very busy,” she joked, saying that she entered the competition on a lark after a tip from her mother.

“My mother saw the competition segment on ‘The Doctors.’ She suggested I apply, because the show was looking for women who inspire girls and women in their communities. I always wanted to go to Africa. I never thought I’d win.”

She found out she won in typical Hollywood fashion. The show’s producers told Pendleton-Knoll that she was one of three finalists, so she prepared herself to argue why she should win the trip to Africa. However, by the time she stepped on stage, the audience already knew the results of the contest. She was pleasantly set up.

“They didn’t want me to know I had won before the show, so they essentially locked me in my dressing room for eight hours during the taping. I was in so much shock when I found out. It didn’t hit me until about a month later when I was on the plane to Africa. I was excited but fatigued. It didn’t seem real. It seemed like a dream.” 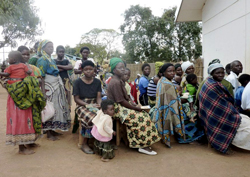 Dozens of Lilongwe community members wait outside the clinic at 7 a.m. to see the only doctor serving 70,000 people. All of them have walked many miles to get there.

Even while doctors were pricking her skin with needles in order to inoculate her from typhoid fever, yellow fever, tetanus, diphtheria and acellular pertussis, Pendleton-Knoll knew she was in for something special in Africa.

“I couldn’t believe how beautiful Africa is,” she said. “We did a lot of driving, so I was able to get a good picture of the countryside. It was gorgeous.”

These touristic impressions of raw nature were not all the former Whitman student took home from her trip. She spent numerous days in the trenches of the local clinic and came away impressed by the medical staff – one doctor and one nurse who treat a community of 70,000.

“It was amazing in all senses of the word – the ability to treat patients with limited supplies. The doctor and nurse worked day and night.”

But while her traveling party, which included Masterson, author and activist Gina Otto and two CBS producers, brought much-needed supplies and medicines, Pendleton-Knoll couldn’t help, at first, but harbor doubts that the impoverished community could support more children. She remembers the nurse asking one local woman, who was about to deliver twins, if the mother could afford two babies at once.

“Sometimes I’d think to myself, ‘I can’t believe another baby is coming into this community that the family can’t afford.’ But I have so much respect for these women who are able to raise their kids with virtually nothing.”

The episode of “The Doctors” showcasing the trip to Africa aired during November “Sweeps Week” to shed light on the plight of Malawians. However, it’s the local people’s resilience that the former Whitman student said will sustain the community, rather than donations and the work of groups like hers.

This resilience is evident in the innovative approach the Malawian school takes toward educating a community where numerous children drop out of school in order to start working to earn money for their families.

To see a video that recaps Seren Pendleton-Knoll’s experience, go to tinyurl.com/78zebq8

Children are taught how to make musical instruments out of old bicycles, jewelry out of magazines and drinking glasses out of old wine bottles. These crafts are sold at local markets.

“The school came up with the solution to teach lessons in the morning and then in the afternoon teach the kids a trade,” Pendleton-Knoll said. The kids can then make money practicing these trades. Some of the earnings go to the family and some to the school. They can then give children an education without compromising their families’ finances, so the kids stay in school.

“It is very self-sustaining and creative.”

She said the Malawian community gave far more back to her than she gave to it. The exposure to sustainable business and education, for example, not only validated her career path but changed the way Pendleton-Knoll thought about business. After returning home, the frenetic volunteer decided to apply to MBA programs.

“My decision to pursue an MBA degree really shocked me. But I’m applying to schools that emphasize social businesses and social entrepreneurism. I want to come up with innovative ways to create sustainable solutions that won’t die once funding stops.”