At the bottom of the world

Cynthia Spence ’87 thinks chemical hand warmers are the best things ever invented. They are necessary gear for the former music major, who now works at the South Pole. 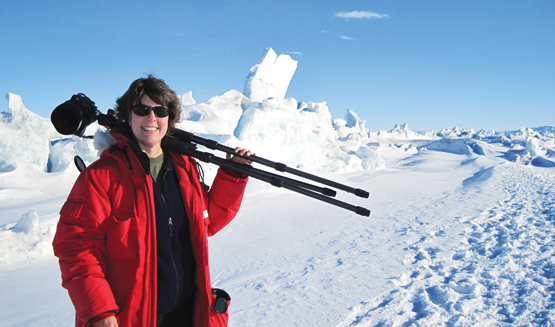 Spence stands on a pressure ridge. The ridges are formed when tides push the ice up in the summer.

“The first year you go for the adventure, the second for the people and the third for the money,” said Cynthia Spence ’87, who works in facilities at McMurdo Station, otherwise known as “MacTown” by the scientists and crew who endure winters that can reach -60 degrees Fahrenheit.

McMurdo Station is the largest Antarctic station and is the logistics hub of the U.S. Antarctic Program.

“Last year we had two condition 1s,” Spence said, explaining that nobody is allowed outside when visibility hits less than 100 feet.

On her third tour, Spence acts as a supply chain associate who helps track inventory, receiving and auditing.

She said Whitman prepared her for the unexpected, odd nature of the work she does, which includes driving various vehicles, one of which is a small forklift called a pickle (M4K), as well as interacting with all the scientists.

This hut was transported by Robert F. Scott to Antarctica in 1902. It still contains his supplies.

“I’ve always loved to learn, and some of the courses I took at Whitman have practical applications here, such as geology and astronomy,” she said. “However, philosophically it’s the Whitman idea of teaching students how to think and learn using the connections between disciplines that allows me to visualize the big picture of my various jobs.”

So why venture to the polar icecap?

“There are Ph.D.s washing dishes just to be here,” she said. “When you’re outside near the shoreline, watching the sun set on the Transantarctic Mountains, and hear seals breathing under the ice, you’re reminded why you’re there.”

This is a view of Ross Island from the ice shelf a few weeks before the first sunrise in August 2011. McMurdo Station, in the shadow of Mount Erebus, is on the left, and the tiny light on the right is Scott Base.