A journey through the reel world 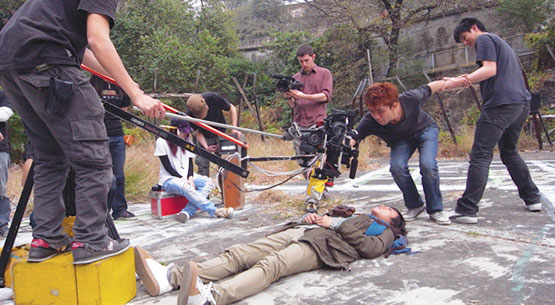 Teal Greyhavens ’08 (in purple shirt with camera) documents the efforts of a crew of first-time filmmakers in Hong Kong.
(Photo courtesy of Teal Greyhavens '08) 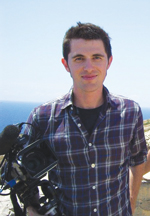 With his Watson Fellowship – a $25,000, one-year grant for independent study and travel outside the U.S. – Teal Greyhavens ’08 and his video camera circled the globe. He cobbled the footage of his trip together to produce “Cinema is Everywhere,” a documentary feature film that screened at the 2011 Austin Film Festival.

“The cinema experience lets you be a part of something – an event, a trip, a story, someone’s entire life – that isn’t yours,” said Greyhavens, who was a rhetoric and film studies major.

His documentary lets the audience experience four personal stories about “cinema dreamers” in four diverse spots across the world: Hong Kong, Mumbai, Scotland and Tunisia. One such dreamer is the award-winning actress Tilda Swinton.

“I was invited into her cinema family for a series of zany film festivals she put on, and her journey wound up being captured as part of ‘Cinema is Everywhere.’”