The following speakers represent only a small selection of the broad range of nationally acclaimed scholars, artists, authors and lecturers who visited campus and interacted with Whitman students this season. Frank Warren, creator of PostSecret, engaged with students in a packed Cordiner Hall during his late November appearance at Whitman. PostSecret is a growing collection of half a million anonymously submitted secrets on decorated postcards that are mailed to Warren’s home. The project began when Warren, now known as “the most trusted stranger in America,” started distributing blank postcards to passersby with his return address. The only guideline for submissions is that the secret must be something the sender has never revealed to anyone. The concept has since exploded into an international, pop-culture phenomenon, with museum exhibits, a popular website and several PostSecret books published. During his interactive presentation, Warren shared a few of his own secrets and encouraged Whitman students to come forward with anything they wanted to make public. 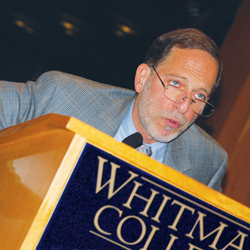 Rashid Khalidi is the Edward Said Professor of Modern Arab Studies at Columbia University. During his November visit to campus, he addressed the recent widespread uprisings in the Arab world with his talk “The Arab Spring in Historical Context.” An expert in his field, Khalidi specializes in the history of nationalism and colonialism in Palestine and the Middle East, and served as advisor to the Palestinian delegation to the Madrid and Washington Arab-Israeli peace negotiations in the early 1990s. He received his B.A. from Yale in 1970 and his Ph.D. from Oxford in 1974. The editor of the Journal of Palestine Studies, he has also served as president of the Middle East Studies Association. Khalidi is the author of several critically acclaimed books, including “Palestinian Identity: The Construction of Modern National Consciousness,” which is required reading for some history majors at Whitman. 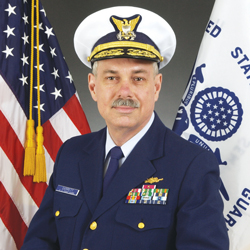 Jeff Garrett, a former United States Coast Guard rear admiral who has spent decades as an ice pilot in the Arctic and Antarctic, spoke in November about the impact of global climate change on the Arctic ecosystem. His compelling lecture, titled “The Arctic Moves onto the Map: Issues for a Transforming Region,” was accompanied by spectacular images from the polar latitudes. Global climate change and the melting of sea ice had recently enabled Garrett to travel from the Atlantic to the Pacific through the islands of the Canadian Arctic. This unprecedented level of accessibility is possible because of global warming. The U.S., one of only a handful of Arctic nations, has only begun to recognize its long-term interests there. Garrett is the father of two Whitman students, Krista Garrett ’12 and Carl Garrett ’15.