Water is a precious resource, but for Mark Giordano ’88, it’s also a ticket to meeting a king.

A managing director for the Sri Lanka-based International Water Management Institute, Giordano will travel to Sweden in August to accept the 2012 Stockholm Water Prize from His Majesty Carl XVI Gustaf, King of Sweden.

IWMI is a nongovernmental organization that strives to improve the management of land and water resources for food, livelihoods and the environment. It has 12 offices in Africa and Asia.

“I’m thrilled IWMI won the award. The award is a recognition of 25 years of work by many people,” he said. 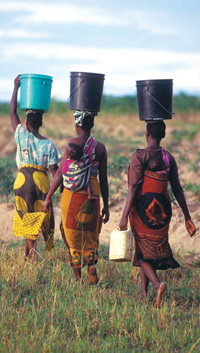 Some women have to walk six kilometers every day to get water. According to the IWMI, 1.6 billion people live in economically water scarce basins, where access to water is restricted by lack of human capacity, inadequate investment, poor irrigation infrastructure or inefficient management. In many places, women’s rights as water users are not often equal to those of men, even though they may be the main users of the resource. A strong emphasis on gender issues underscores IWMI’s work.

The prize, supported by the Royal Swedish Academy of Sciences, is considered the world’s most prestigious award for achievements in water-related activities. It includes a $150,000 cash prize.

“We’re thinking of using it as a basis for establishing an endowed scholarship to support students from developing countries to study water problems.”

Giordano has worked for IWMI for 10 years. He leads the social science program, whose 25 scientists work to improve agricultural water management and reduce poverty in developing countries.

“Most people think water issues are about drinking water, but it’s agriculture that is at the heart of our major physical water challenges,” he said.

The former economics major said Whitman gave him the ability to think about the big picture.

“I’m a scientist who has to publish and stay on top of scientific issues. But I’m also managing a group of scientists, which means figuring out how to facilitate them to use their great minds … As I go forward in my career, the ability to think broadly is most important.”

Is water the new oil, a scarce resource over which wars will be waged?

“The evidence shows that sharing water is more likely to bring countries together than lead them to war,” he said. “There are a few water hotspots – the Nile and the Jordan – but there are more than 250 other rivers that cross international boundaries and the record with those rivers is overwhelmingly cooperative.”