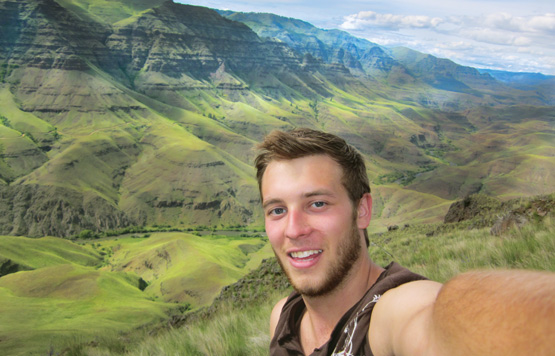 Environmental humanities majors explore how we fit into the big picture. Fittingly, Dorian Zimmerman ’12 took this photo of himself overlooking the Imnaha Canyon in Oregon during his participation in Whitman in the Wallowas, a summer program led by Whitman faculty that engages students in fieldwork in the natural and human ecologies of Wallowa County, Ore. The course of study is developed in collaboration with local faculty from the Wallowa Mountain Institute.

Like Ralph Waldo Emerson and Henry David Thoreau, Whitman’s environmental humanities majors seek to answer this question: How should we fit into the natural world?

Phil Brick, the Miles C. Moore professor of political science, said there are relatively few colleges with environmental studies departments that have a “three-legged stool” approach – a curricular design that includes sciences, social sciences and humanities to make it truly integrative across all three areas of liberal learning.

Students get a better understanding of environmental issues from an interdisciplinary viewpoint. If you examine wind turbines, for example, there’s energy physics to understand, and certainly the siting of the turbines has been politically contentious. And then, Brick said, the humanities ask different kinds of questions, such as “Are they beautiful?” or “What do they mean?”

To solidify the humanities component of the environmental studies program, in 2001 Brick helped lure Don Snow to Whitman with the offer of a prestigious Arnold Professorship. Snow founded Northern Lights Magazine, a quarterly journal about art, politics and nature in the Rocky Mountains. Brick said he had been a fan of Snow’s writing and his journal for years.

“Once we had him here for four or five years, the student interest bloomed,” Brick said.

Davis, who helped design the major and guide it through the approval process, said, “Figures like Emerson and Thoreau don’t fit into disciplinary categories.”

He and Snow saw environmental humanities as a way to bring nature writing onto campus and not split it between the literature and philosophy departments.

EH major Gaea Campe ’12, who along with Zimmerman hopes to make a living as a writer, said, “Through the reading and writing you do in classes like The Nature Essay and Literature of Nature – especially Don Snow’s classes – you really learn to write in a way that you would write if you were writing for publications.”

The faculty has grown in innovative ways to meet student demand. Before Emerson and Thoreau came Homer, Herodotus, Theocritus, Vergil, Ovid and Pliny. So in 2011, Whitman hired Kate Shea to be the assistant professor of environmental humanities/classics. Shea said her courses offer students a “greater historical, cultural and literary depth” to their understanding of environmental issues. Her position is believed to be the first of its kind in the country.

“I see it not only as a program-building but a discipline-building opportunity,” Shea said. “I get to make a significant contribution, both in my teaching and in my research, to a new area of study and to be a model for how that might translate into teaching positions in other schools.”

Shea said other schools interested in following Whitman’s lead have already contacted her to learn more about her pioneering classes.

To offer students an opportunity to explore another perspective that examines the intersection of nature and culture, Whitman recently created another groundbreaking position at the juncture of German studies and environmental humanities.

“This is a natural pairing, given the sustained interest that German writers have shown in the relationship between humankind and the environment, extending back even prior to the Romantic movement,” said Jack Iverson, associate professor of French and chair of the Department of Foreign Languages and Literature. “German thinkers, like Goethe, Hölderlin and Heidegger, have been extremely influential in this domain, and it’s no accident that German environmentalists have been at the forefront of modern ‘green’ movements.”

Brick said, “By approving this position, the college is really making a substantial investment in environmental humanities, a field in which we’re right on the cutting edge.”