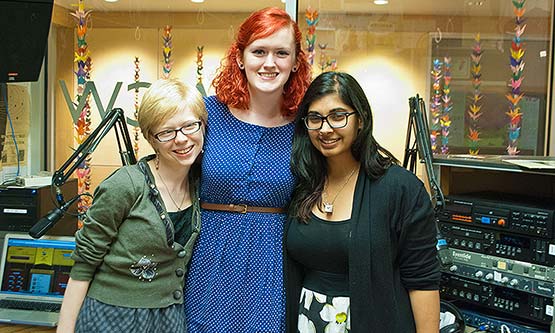 Sara Rasmussen ’12 first met Mehera Nori ’12 on their first day of Encounters (then called Core). Nori was wearing a t-shirt emblazoned with “Voldemort Can’t Stop the Rock!” – a reference to the indie wizard rock band Harry and the Potters. It was the beginning of a four-year friendship and a popular KWCW radio show called The Witching Hour, which has listeners all around the world.

“We were so surprised when we started hearing from people outside of Whitman,” said Nori, a politics and Spanish major from Redmond, Wash. “I’m still surprised to hear from people at Whitman!” 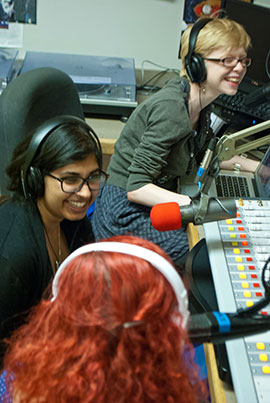 From back to front, Claire Johnson ’14, Mehera Nori ’12 and Sara Rasmussen ’12 broadcast their show from the KWCW studio.

On their show, Rasmussen, Nori and Claire Johnson ’14 play songs by such bands as the Remus Lupins, Draco and the Malfoys and MC Kreacher, and they have even interviewed some of the band members on air. They combine the music with their own commentary about the books, sometimes identifying how they intersect with political and social issues in the real world.

Inspired by the Harry Potter series, wizard rock is a genre of music that has acquired a massive fan base over the past decade thanks to the popularity of bands like Harry and the Potters, which played for a packed audience at Whitman in November. The concert was part of a two-week long “Weeks of Wizardry” celebration organized by The Witching Hour and the Whitman Events Board, which also included a Harry Potter themed improv performance, trivia match and Quidditch tournament.

When they started podcasting each weekly broadcast and were able to track who was downloading the show from iTunes, they realized The Witching Hour had developed an international following. They estimate the show attracts between 800 and 1,000 online listeners monthly, with some tuning in from Australia, South Korea, Sweden and Saudi Arabia.

“Because of the Internet and Google Analytics, we’re able to see where people are from and how many downloads we’re getting,” Rasmussen said . “I think what appeals to people about our show is that so many people love Harry Potter and love discussing the Harry Potter universe. And since we look at different aspects of the books, different themes and characters, people start listening to the music and they realize, ‘Hey, this is really good!’ Or, ‘Wow, this is really bad,’ but they listen to it anyway, because it’s funny.”

At first, The Witching Hour was mostly just a creative outlet for the three hosts to share their love of Harry Potter and wizard rock with fellow Whitties. But 68 broadcasts later, the magic continues, even after Rasmussen and Nori graduated in May 2012. They both list the show on their resumes, and all three agree that hosting the show and promoting related events has provided valuable career skills.

“I wouldn’t say that we take ourselves too seriously, but at the same time we do take ourselves seriously,” said Rasmussen. “On the air, we’re really silly, but beyond that we get things done. We advertise, we do the podcasts, we update the website.” 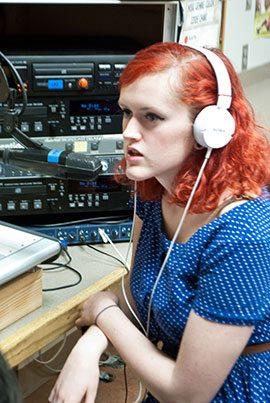 Sara Rasmussen ’12 said, “This show has been such an important part of my Whitman experience, and I’m excited to share it with a larger audience.”

The Witching Hour will be on hiatus in the fall, while Johnson studies abroad in Alicante, Spain, although she plans to resume broadcasting once she returns to Whitman. Nori will head to Shanghai to work for Microsoft and hopes to later apply to law school. Rasmussen, a Fulbright alternate, is working for Walla Walla Web Weavers as a designer.

But before they go their separate ways, The Witching Hour staff will make a special stop in Chicago in August to attend the 2012 LeakyCon, an annual gathering of thousands of Harry Potter fans. At the conference, Rasmussen and Nori will host a roundtable discussion, titled “Potterverse Politics: Reading Harry Potter as an Allegory for Contemporary Socio-Political Issues.”

“We’re really looking forward to LeakyCon because it will be a sort of culmination of our time hosting The Witching Hour and because it will be another opportunity to fuse our Whitman politics degrees with Harry Potter,” Rasmussen said. “This show has been such an important part of my Whitman experience, and I’m excited to share it with a larger audience. I’m nervous, too, though, because when we’re in the studio, it feels like it’s just us three DJs. At the conference, we’ll finally be able to see our audience! ”

To find out more about The Witching Hour, visit thewitchinghourkwcw.tumblr.com.