The following speakers represent only a small selection of the broad range of nationally acclaimed artists, authors and lecturers who visited campus and interacted with Whitman students this spring. 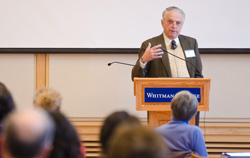 David Boardman March 29
The 2012 Hosokawa Journalism Lecture featured David Boardman, executive editor and senior vice president of The Seattle Times. His talk was titled “The Promises and Perils of Journalism in the 21st Century.” The Seattle Times is Washington State’s largest newspaper, and Boardman has directed three of its Pulitzer Prize-winning projects. He discussed how the Times is evolving to cope with the economic realities and the ever-changing media environment. Since 2000, the annual endowed Hosokawa Lecture Series has brought noted journalists to campus. 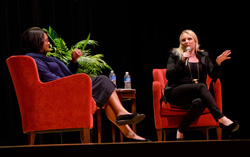 Meghan McCain April 11
Meghan McCain, daughter of Arizona senator and 2008 Republican presidential candidate Sen. John McCain, engaged in a moderated discussion with Assistant Professor of History Jacqueline Woodfork. The young author, blogger and political activist shared her perspective as a socially progressive member of the Republican Party. McCain also fielded questions from audience members ranging from her stance on hot-button political topics such as universal health care and marriage equality to her experience on the campaign trail with her father. 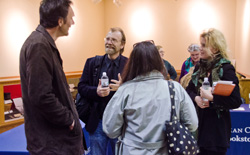 George Saunders April 26
George Saunders, critically-acclaimed author of three best-selling collections of short stories, had his audience in stiches with his comic reading of the short story “Victory Lap” in Maxey Auditorium. Saunders’ visit to campus was part of Whitman’s Visiting Writers Reading Series, and the author, who teaches creative writing at Syracuse University, also spent part of his day visiting Whitman classrooms. During the question and answer portion of his public lecture, Saunders discussed the writing process and shared some advice with aspiring young writers. He also described how his background in engineering and working a series of odd jobs before becoming a writer provided him with a unique perspective.