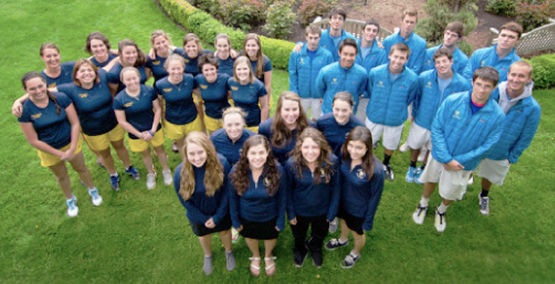 Mark April 22, 2012, as a historic day for Whitman College athletics – a day in which three varsity teams swept aside the rest of the Northwest Conference (NWC) to earn spots at their respective NCAA Division III national championship tournaments.

Women’s tennis under Coach John Hein was the first to strike, upsetting Linfield 5-3 to punch that program’s first-ever trip to the NCAA championships.

The men’s tennis dynasty under Coach Jeff Northam ’88 defeated George Fox 5-0 to claim its sixth consecutive trip to nationals. And the upstart women’s golf team under Coach Skip Molitor won at the NWC Tournament to earn that program’s first-ever berth at nationals.

The golf team headed to Angola, Ind., in early May for a four-day 72-hole tournament featuring the nation’s best 19 teams. In the first round, Whitman moved into sixth place in the team standings, while Kelly Sweeney ’15 shot 1-over par 73 and tied for second in individual scoring. The team finished in 12th place.

The women’s tennis team traveled to California to post a 5-3 first-round victory over U.C.-Santa Cruz. The Whitties then lost in the second round to Claremont-Mudd-Scripps.

The men’s tennis team, after rising as high as No. 8 in the national rankings this spring (No. 1 in the West), traveled to Atlanta, where they lost in the second round to N.C. Wesleyan.

Whitman’s tennis season was not finished, however. Andrew La Cava ’14 was invited to the 32-player national singles championship, and Alyssa Roberg ’13 and Courtney Lawless ’14 drew invites to the women’s singles and doubles championships.

La Cava beat a Skidmore player in the first round before dropping a 6-4, 6-4 decision to the nation’s top-ranked player (from Emory) in the second. After losing their singles matches, Roberg and Lawless teamed up in doubles to beat a duo from Washington University (St. Louis) before losing in the quarter finals to Emory.

The men’s and women’s basketball teams both made the NWC’s post-season tournaments, and the swim teams finished near the top of the conference, placing second (men) and third (women) at the NWC Championship Meet.

Galen Sollom-Brotherton ’14 was named men’s Swimmer of the Meet while both he and Karl Mering ’15 became the first Whitman men to qualify for the NCAA National Championships. Jenn Blomme was named NWC Coach of the Year for men’s swimming. The 2011-12 academic year saw 12 of Whitman’s 14 varsity programs place in the NWC’s top half. Whitman tallied the second highest point total per program in the NWC.

Basketball player Jenele Peterson ’12 and tennis ace Conor Holton-Burke ’12 received the 2012 Borleske Trophies, given annually by a vote of the Whitman coaching staff to the top female and male athletes in recognition of athletic accomplishment, leadership, sportsmanship and campus contributions. President George Bridges also awarded basketball player David Michaels ’12 the first Award for Distinguished Service in recognition of achievement in the classroom and on the court.