Have ukulele, will travel 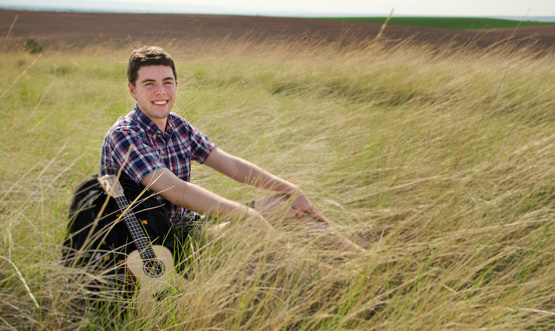 By the time Zach Duffy ’12 returns to the U.S. next year, he may be able to add “ukulele expert” to his curriculum vitæ.

Duffy earned a fellowship from the Thomas J. Watson Foundation that will allow him to travel the world for a year to explore solutions to youth unemployment.

“I’m planning on picking up an instrument for the trip,” he said. “I’ve been shopping around to figure out what kind would be best to take with me. Probably a ukulele. Definitely a harmonica. And I’m going to make sure I learn to cook at least one dish from each country I’m visiting – I want to be able to share a little part of this year with my friends when I come home!”

The project for which Duffy earned the Watson Fellowship is titled “Recovering a Lost Generation: How Nations Help Unemployed Youth into the Workforce.” He plans to visit Japan, China, Thailand, Singapore, Switzerland, Germany and the U.K. to interview government officials and learn about social programs.

“If the threat of youth unemployment facing the United States is grave, so are the similar problems facing nations around the world,” Duffy said. “All of these countries are dealing with the same issue, and some are surely dealing with it more successfully than others. I want to know which ones and why.”

Since the establishment of the Watson Fellowship in 1968, Whitman has produced 40 recipients, including Duffy. The fellowships offer college graduates from a select number of colleges and universities a $25,000 stipend for a year of independent travel and exploration. Though Duffy will certainly be busy with his scholarly endeavors, he hopes to make time for himself, too.

“I am definitely planning on getting as much sightseeing under my belt as possible, seeing the Great Wall of China, exploring neighborhoods in Tokyo, paying a visit to Buckingham Palace,” he said. “And I’ll be going on a lot of day trips to national parks to just take in the opportunity I have to see some of the most beautiful parts of the world.”