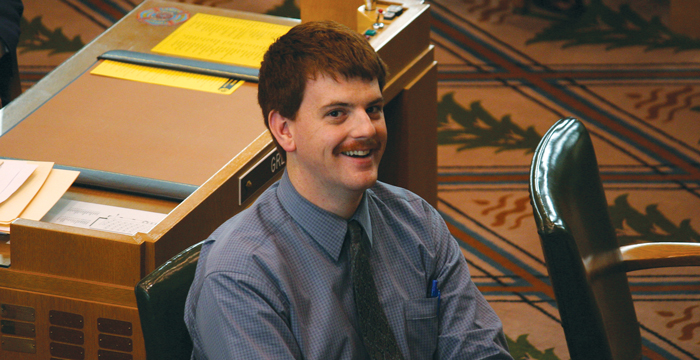 Tom Powers ’06 was confident Oregon’s Democratic Party would win the day in this year’s election.

“We’re currently at a 16-14 majority in the Senate, so we’re playing defense,” said Powers, the executive director of the Senate Democratic Leadership Fund prior to the 2012 election.

“We’ll hold on to maintain our Senate majority. Plus, we have an historic opportunity to pick up a seat in Bend with Democrat Geri Hauser running against Republican candidate Tim Knopp. We haven’t had a Democrat elected east of the Cascades in a long time.”

Although Hause lost, Powers is still one of the most influential players in Oregon politics. He runs the campaign arm of the Democratic caucus, and in the 2012 election season, he coordinated the Democratic campaigns of 15 senators up for reelection. At the SDLF, he synchronizes all aspects of the campaign efforts, from strategy and staffing, to communications, research and fundraising.

“Tom Powers brings integrity, a strong work ethic and intellect to this position,” Senate President Peter Courtney said in a press release issued by the SDLF after Powers was hired back in August of 2011.

“Oregon Senate Democrats will be well served by both his campaign expertise and deep understanding of Oregon and her people,” Courtney added.

Powers became interested in politics at Whitman. He remembers watching the 2004 presidential election unfold while living in an off-campus house with other politics majors.

“We got our butts handed to us,” Powers said. “We lost the presidency and the Senate. I felt there was a lot of work to do to set things right. At the time, I was interning at a congressional office. I knew then and there that I wanted to carry on my work in politics,” he said.

Powers credited Whitman for giving him a deeper understanding of politics than students who graduated from traditional political science programs.

“Politics at Whitman is good, because it doesn’t dwell too much on the current system of American government. Rather it’s an analysis of underlying power. Getting to the roots of politics is learning about the way power is used, which really helps you understand electoral and legislative politics. At Whitman, I got a deeper understanding of the actors at play and where power is rooted.”

Powers said that one class in particular, which dealt with politics and place, got him thinking about the roles that boundaries and geography play in politics. At the time, he was living in Whitman’s Global House, which he said also made him analyze politics from a geographical perspective. Eventually, this perspective earned him a nickname: The Map Guy.

“I’m known as The Map Guy in Oregon politics, because in 2008 I was running a campaign for Democrat Chuck Riley against Republican challenger Jeff Duyck in Forest Grove. I knew Duyck was living on the border of a district, and I found out the district line actually ran through his property.”

It was ruled that Duyck didn’t reside in Riley’s district. Duyck was disqualified on the basis of the Oregon Constitution, which requires legislators to live in the districts they serve, so Riley won. This success led Powers into the hazy world of redistricting.

In 2010, Powers was the Democratic staffer in charge of the state’s redistricting efforts. Redistricting plans must pass the State Legislature. If they don’t, they are sent to Oregon’s secretary of state, who makes the final decision.

“When I ran redistricting, it was the first time in 100 years both parties in the Legislature agreed on a new set of maps without the plan getting kicked up to the secretary of state,” Powers said proudly.

In his six-year career in politics, Powers has gone from being a legislative aid at the state capitol to his current position as executive director of the SDLF. It’s been a rapid rise. But just because Powers now runs the show for the SDLF doesn’t mean he’s isolated in a glamorous office inside a building with ivory towers.

“My job is very strategic,” Powers said. “But you have to roll up your sleeves and do the ground work. I’m not sitting in some control room. I go out knocking on doors to meet voters, which gives me the opportunity to meet a lot of different Oregonians.”