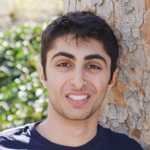 He lost his first big election. As a senior at Woodinville High School, just outside of Seattle, current ASWC president Kayvon Behroozian ’14 ran an unsuccessful campaign for student body president.

When he ran for ASWC president at Whitman, Behroozian said, “I did have thoughts back to high school. ‘Oh, gosh, what if I lose again?’ But the prospect of losing is part of the election process.”

Behroozian is currently trying to open up a position on Whitman’s board of trustees for a student or young alumni.

“Past ASWC administrations have been for it and we’ve discovered some of our competitor schools have such a position.”

The politics major says advocating for changes that would make Whitman more streamlined, effective and helpful to students is what student government is all about. However, student government also enables participants to discover personal insights.

“Whitman does a fantastic job of getting us excited about what we’re learning. Student government, like any extracurricular activity, lets you learn something about who you are.”

Getting out the vote 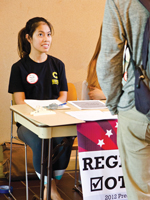 Her family emigrated to the U.S. from Vietnam in 1993 when she was just three years old. Bao-Tram Do ’13, who goes by the nickname “BT,” said that her father moved here so his children would be able to participate in the political process.

“Some people have to fight for the right to vote,” said BT, a first-generation college student. “People who don’t have a voice make me think of my family. We came to this country because my parents wanted us to be able to choose our government.”

Because of her background, the sociology major has a fundamental commitment to making it easier for her fellow citizens to vote. This past summer, BT had the opportunity to help give voice to the voiceless by registering potential voters while interning at HealthPoint, a group of community health clinics serving low-income families at 13 locations in the greater Seattle area. When BT returned to Whitman she started a voter registration drive on campus.

“I think Whitman students have a lot of ideas about our current political situation, so I think it’s important that they participate and vote. Unless you’ve voted I, don’t think you can complain.”

Standing up for women 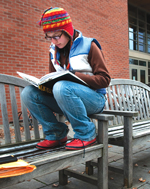 Because her mother was a nurse at a woman’s health clinic in the small village of Palmer, Alaska, politics major Madelyn Peterson ’13 says she was destined to become a feminist.

“I grew up in an environment of women’s health care, so I have a more-acute-than-normal awareness of woman’s health,” said the co-president of the group Feminists Advocating Change and Empowerment (FACE).

“I’ve always been engaged in women’s issues, so it was natural for me to start working with FACE when I arrived at Whitman.”

As a leader of FACE, Peterson and co-president Gabriella Friedman ’13 have created “a space where people feel cared for and accepted.”

One issue on the organization’s “radar” was supporting state referendum 74, which would uphold Washington’s marriage equality law, by running phone banks and encouraging not only their fellow students, but also the general public to approve it. The referendum succeeded.

“Our group is aware, critical and passionate,” Peterson said. “Working with FACE, I learn more about myself, and to be a better human being, a better feminist and a better political agent.”