Noted journalists speak on the election 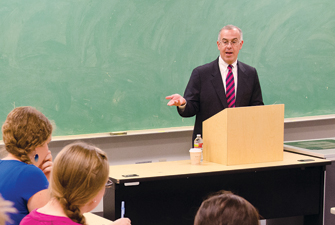 Whitman invited David Brooks, op-ed columnist for The New York Times, to give a lecture on Oct. 15 as part of a two-part political speaker series titled “The U.S. Presidential Debate.” Shampa Biswas, associate professor of politics and politics department chair, moderated the lecture.

From the outset, Brooks used humor as he framed his speech around a 1950s ethos of humility and modesty that has, he argued, been replaced by a “culture of self-advancement” characterized by self-promotion and individual consumption.

“It was refreshing to have a speaker at Whitman who wasn’t preaching to the choir,” said Alex Ponnaz ’11. “I found it interesting that he labels himself as a conservative when he’s so much more moderate than most conservatives today.”

Brooks offered that in the current political climate U.S. politicians often fail to tell the truth because when they do – about tax increases or cuts in spending – voters punish them.

“Everyone complains about our leaders,” Brooks said. “But we voters are no walk in the park, either. We tend to punish politicians who ask for sacrifice. But most people who go into politics do it for the right reasons. I think that’s true in the presidential race. I think we genuinely have two good men running against each other.”

Brooks went on to warn the audience that the U.S. faced three “cross-cutting problems”: rising debt, rising social inequality and the need to boost growth. He said these problems are in tension with each other, and balancing them would be a challenge that if not met would result in a “fiscal crack up.”

Brooks said that after spending the day at Whitman, the students left him feeling optimistic about America’s future.

He added, “If you want to feel good about the country, look at people under 30. They are an incredibly wholesome and responsible generation …” 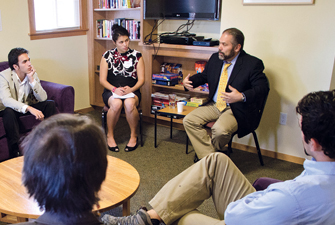 Ray Suarez speaks with students of Paul Apostolidis, associate professor of politics and Judge and Mrs. Timothy A. Paul chair of political science, at the Glover Alston Center.

Speaking at Maxey Auditorium on Oct. 23, Ray Suarez, senior correspondent for “The NewsHour” on PBS, offered a blunt assessment of the economic challenges facing the nation. But he started on a lighter note.

“I want to thank Whitman for bringing me out here and for arranging for me to go second, so I get the last word after my friend and colleague, David Brooks,” joked the veteran journalist. “Actually, I saw David last night before I left the office, and he said I was going to have a good time and that he really enjoyed his visit, and so far so good.”

“In my view, Mr. Suarez drew attention in very compelling ways to the failure of both major presidential candidates to speak frankly about the depth of suffering involved in the ongoing economic crisis,” Apostolidis said.

In his speech, titled “Election 2012: The American Political Landscape,” Suarez covered topics central to the election, as well as those both candidates seem reluctant to address, such as the housing crisis, Social Security and climate change.

“Especially in a close election, neither candidate wants to take what is perceived as a risk to talk to this country’s citizens about how difficult the economic realities really are,” he said. “They can’t talk about what’s really going on in the world economy. So what’s considered ‘sayable,’ what’s discussable, what’s debatable, gets very narrow; too narrow to adequately reflect the depth of the challenge and the size of the danger in the coming years.”

Prior to his public lecture, Suarez praised the liberal arts for teaching students the value of learning for its own sake.

“These are all important things, no matter what you’re going to do for a living,” he said. “I value my liberal arts education, and I just put two kids through college, and I know they value theirs.”