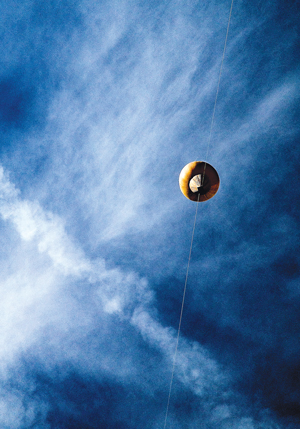 A view from below of the weather balloon, which was part of the project titled "Whitman Sky." A camera, suspended from the balloon, streamed footage of Ankeny Field to the Internet.

You are being watched. And whether you like it or not, surveillance is increasingly part of daily life.

That’s the message students hoped to convey when they sent a digital camera aloft with a copper-colored, helium balloon over Ankeny Field. Tethered at four points, the balloon bobbed in the wind 150 feet above campus. Signs posted on the perimeter of the field announced that, “Ankeny Field is now under aerial surveillance,” and that live footage was being streamed at www.whitmansky.com.

Students created the unique project as a part of a pioneering class titled Raw Geographies, which is taught jointly by Associate Professor of Politics Aaron Bobrow-Strain and Assistant Professor of Art Michelle Acuff.

“Art can spark new ways of experiencing one’s connection to politics, and by ‘politics,’ I mean all the ways that people navigate through the everyday power relations that shape their lives,” Bobrow-Strain said. “We’ve discovered that art can make invisible power relations more visible, enable new ways of seeing the world and unsettle the ‘taken-for-granted’ in ways that create space for political conversation and dialogue.”

To make “Whitman Sky” possible, students had to think deeply about power relations they wanted to make visible, and then they had to improvise and collaborate to pull it off.

“The tools required for these projects vary in extraordinary ways, connecting theoretical and formal realms, the do-it-yourself with the highly technological,” Acuff said. “Some tools and materials invent themselves along the way, purely out of imagination and necessity.”

Raw Geographies is a distinctive class, because it lies at the juncture of social sciences and the arts. 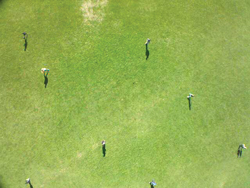 A still frame from the video that the airborne camera streamed to the whitmansky.com.

“We’re taking a lot of risks,” he said. “We talk a lot about interdisciplinary connections at Whitman, and this is one that’s really interdisciplinary. And for me it’s a whole new way of thinking about teaching and working with students.”

The class sprang out of the 2010 Global Studies Faculty Seminar, which is part of the Global Studies Initiative made possible by a $345,000 grant from the Andrew W. Mellon Foundation. During the seminar, faculty members explore global issues with the aim of also developing cross-disciplinary courses and events.

“Michelle and I connected around our shared interests in landscape, geography and art and how those intersect,” Bobrow-Strain said. In recent decades, he said, geographers, anthropologists and social scientists have begun using art to convey ideas that academic writing can’t.

He said, “The particular focus on geography in the class has really helped all of us think about how power relations shape the physical environment and, in turn, are themselves shaped by the physical world – the way power gets written on the landscape, the way power works through landscape.”

Raw Geographies, first offered in the fall semester, was the result. But what does “raw” mean?

“Conventional museum walls no longer exist in this kind of space; the whole world, its materials, public spaces, dynamics and institutions have become the raw materials of a very socially astute artistic practice,” Acuff said.

Take, for example, the project titled “Fence.” Students used barbed wire to fence off Treaty Rock, a memorial on the east side of campus that commemorates an 1855 treaty that moved area tribes to reservations. The fence served to symbolize how the Walla Walla and the Whitman community residing on former tribal lands separates itself from that history, and the fence also symbolizes how the treaty restricted American Indian rights. 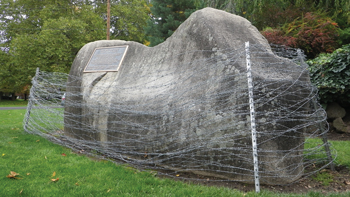 To bring attention to the way the Treaty of 1855 restricted American Indian rights, students encircled Treaty Rock in barbed wire.

“Raw Geographies has taught me how valuable collaboration can be,” Lisa Beneman ’13 said. “Having the opportunity to collaborate with students of geology, classics, art, anthropology and more has been an awesome way to widen my perspective.”

And that’s exactly the point of the class.

Bobrow-Strain said, “Whitman politics students already tend to be really good at reading texts, developing critiques and writing papers about politics, but to have to leave the security of the page is challenging – to think about how politics work on an effective, visceral level.”

Acuff said Raw Geographies students are rising to the challenge, producing evocative works that combine the disciplines of art and politics.

“I see students making connections that evidence a new breed of cultural worker, one attentive to the ideological dimension of art,” she said.

As both the professors and the students explore this creative arena, those on campus will see more projects that will spark inspiration, dialogue and emotion.

Acuff said, “I think the campus is awake to new possibilities as a result of these works.”