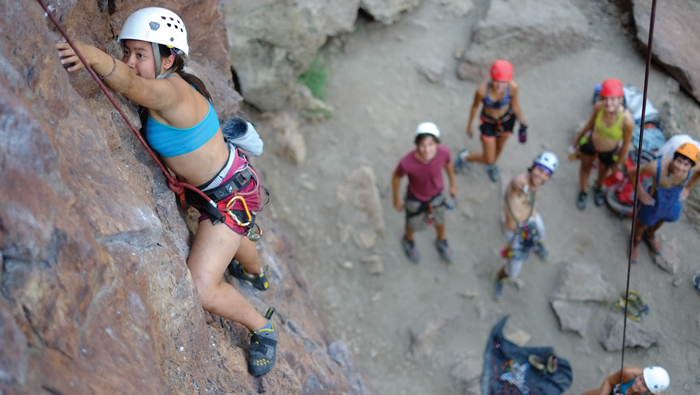 What better way for Whitman students to meet each other and learn about the college than six days of rock climbing at a world-famous climbing area? Students camp outside Smith Rocks, Ore., and learn the skills they would acquire at a beginning climbing class at Whitman, only outside on real rocks.

What started as a loosely organized outing club in the late 1960s, has since turned into one of the college’s most popular co-curricular programs.

The newly established Bob Carson Outdoor Program Fund – named to honor the long-time professor of geology and environmental studies and his enthusiasm for the outdoors – provides opportunities for each entering student to take part in the influential outdoor learning programs offered at Whitman. Two anonymous alumni founded this fund with the belief that all Whitman students should be encouraged to experience the outdoors, regardless of their ability to afford the cost of trips. This fall, the fund provided all first-year students with a $150 credit toward Outdoor Program trips, with hopes to broaden this offer to include all students next year. To this end, the founders ask you to join them and the 70 other donors who helped launch the fund this year. The founders will match all contributions to the fund from alumni, parents and friends – up to $50,000. Your support will help open the outdoor world for more Whitman students.

Nearly 50 percent of all incoming Whitman students participate in the Outdoor Program before they even step foot in a classroom. It’s called a “Scramble,” a guided outdoor adventure where first-year students and their group leaders go out into the wilderness to experience the wilds up close and personal.

“I went on the Bumpin’ Bowman Scramble,” said Cody Burchfield ’16. “Nothing compares to the bond generated by traversing nine difficult miles on a warm day in the high terrain of the Wallowa mountain range.

“I feel more comfortable alongside my Scramble mates (whom I spent five days with), than I felt alongside people with whom I spent my whole high school career.”

In their 35th year, the Scrambles are about more than hiking through the Wallowas, sea-kayaking among the orcas lurking off the San Juan Islands or hiking across trails that switchback through Olympic National Park.

“Most students have the same experience as Cody,” said Brien Sheedy, director of outdoor programs. “Scrambles give incoming students the chance to meet new friends before school begins.”

But Scrambles are only a small part of Whitman’s Outdoor Program, which also includes the Climbing Center and Sports Studies, Recreation and Athletics classes, such as river guide leadership and wilderness first responder courses. The Outdoor Program also runs a rental shop and offers training courses and clinics that cover such topics as avalanche safety and high-angle rescue.

The most popular aspects of the program, though, are the “OP trips.” These trip activities include rock climbing, mountaineering, alpine tourism, whitewater rafting, winter camping and snowshoeing, just to name a few. This year, students went moonlight sea-kayaking, hiking at Palouse Falls and “sand dunes adventuring.”

Andy Dappen ’76, one of the first directors of the Outdoor Program, agrees. Hired in 1980 after returning from a Watson fellowship that entailed living in Europe to study how the outdoors was used in education and therapy programs, Dappen took over the Outdoor Program when it was little more than a closet with a few sets of cross-country skis and a collection of students who wanted to take advantage of Whitman’s close proximity to nature.

“As a student, I was a bit of an adrenaline junkie,” Dappen said. “But for me, being in the outdoors was also a way to unplug from college. It was restorative. It refreshed me and changed the pace.” 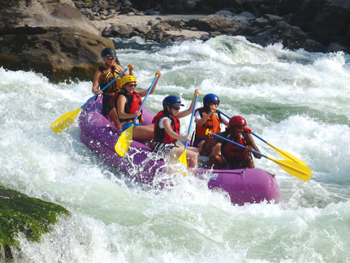 Scrambles participants can choose to travel to Western Idaho to paddle the roughly 70 miles of the Lower Main Salmon River.

Dappen, who runs a website about the Wenatchee Valley (www.wenatcheeoutdoors.org), said the Outdoor Program is now a major part of the college experience at Whitman. He believes the program still serves as a way for students to unwind from their academic rigors, and it also teaches students to respect and care for the environment.

“If you introduce students to the outdoors when they’re young, they’ll learn to love it and become advocates to protect it. The Outdoor Program gets students attracted to the sugar rush of having fun, but once they connect to the outdoors, they are connected to the medicine of preserving it.”

The Outdoor Program has taken a quantum leap forward since the early Dappen days. During Sheedy’s current tenure, he has led the program by increasing the focus on safety.

He started by revamping the old outdoor climbing wall to make it safer. He then advocated for an indoor wall, and by 2009, Whitman’s stellar Climbing Center was established. Sheedy went from relying on volunteers to hiring employees, many of them students, who must undergo rigorous training sessions before they can lead trips. He hired an assistant director of the Outdoor Program, as well as a rental shop manager. He increased the number of Scrambles by 45 percent and doubled outdoor class offerings. Today, there are 14 climbing classes a week, with each class averaging 12 students and two student instructors. An average of 80 students a day now take advantage of Whitman’s climbing wall. 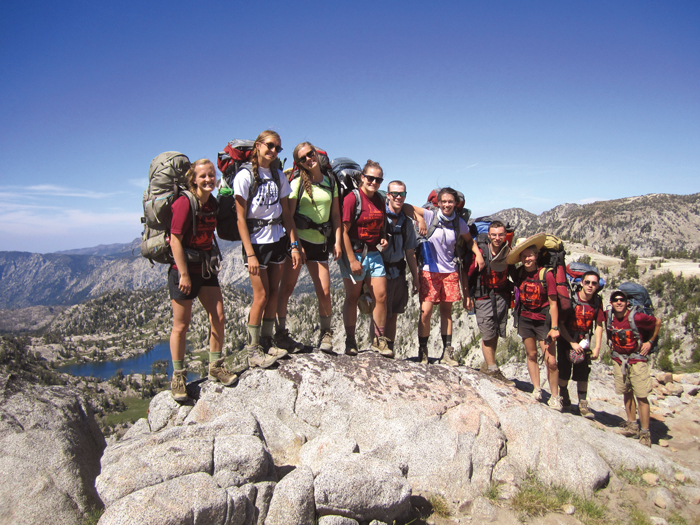 First-years can experience the beauty of the Wallowa National Forest in Eastern Oregon during a four-day backpacking trip that goes up to about 9,000 feet in elevation, where pristine wilderness and alpine meadows await.

“Through the Outdoor Program Whitman teaches our students life skills. By leading trips and teaching outdoor classes, our students learn responsibility, and they themselves become leaders,” Sheedy said.

Adam Michel ’12 said the Outdoor Program enabled him not only to grow as an individual, but it also enabled him to engage in experiential learning opportunities.

“I came to Whitman with no back-country experience,” Michel said. “By the time I was a senior, I was teaching rock climbing and whitewater kayaking classes and leading OP trips each weekend. I had the opportunity to take on leadership positions that will translate to my future career paths.”

Claire Snyder ’12 agreed with Michel. The former biology major said that the Outdoor Program enabled her to mature.

“The responsibility that comes with leading a group of people through a remote wilderness bestows a kind of maturity that my parents could only have dreamed of when sending me off to college,” Snyder said.

The Outdoor Program even reaches students who don’t consider themselves outdoor enthusiasts by scheduling special events, such as the Teton Gravity Research ski film, the Banff Mountain Film Festival and Rocks and Burgers, where staff members and volunteers barbecue burgers outside the Climbing Center to get reluctant students to try the climbing wall. 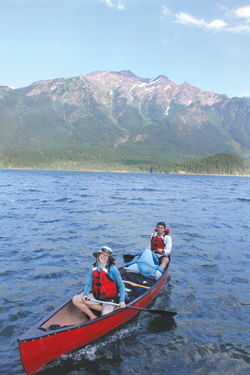 Students can embark on a sea kayaking adventure that takes them around Orcas Island in the San Juan Islands of Washington. Scramblers will cover about 10 miles of ocean each day, learning paddling and rescue techniques in the process, as well as the fine art of back-country cooking.

ldquo;I estimate that up to 90 percent of our students have some interaction with the Outdoor Program during their four years at Whitman,” Sheedy said.

At the heart of the Outdoor Program, however, is its ability to inspire students by daring them to dream. One such dreamer is Daichi Hirata ’10, who, yearning for an experience that would imbue him with a sense of discovery, responded to the clarion call of his favorite nature writer, John Muir, who wrote, “We must risk our lives in order to save them.”

Hirata, along with his sister, embarked on a five-month journey through the Inside Passage. They kayaked 1,200 miles from Deception Pass State Park in Washington to Riggs Glacier in Glacier Bay National Park, Alberta. Along the way, Hirata visited some of his favorite nature writers, such as Kim Heacox, a naturalist and ranger in Glacier Bay.

“I felt a deep calling to live in the wilderness,” Hirata said. “I knew the wilderness would give me permission to be different. This, I knew, was the way I wanted to spend four precious months I had with my sister – without cell phones, email or Facebook.”

Like many students, Hirata came to Whitman because of the college’s academic reputation. But he also chose Whitman because the college is next door to nature. At Whitman, he discovered his place in the natural world, thanks to the resources and opportunities the Outdoor Program provides.

“The wilderness is where we come from, and it could teach us much about our humanity.”