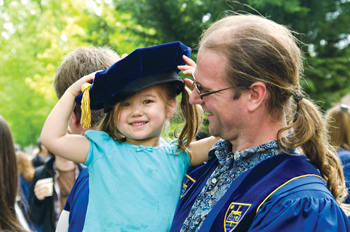 Patrick Frierson, associate professor of philosophy, and his daughter, Phoebe, after the 2012 Commencement.

Six years ago, I was working on some articles relating to Immanuel Kant’s theories in psychology. When I wasn’t writing, I was going on long walks with my newborn first child who would only sleep while in motion. On those long walks, I started thinking more about a topic that had interested me as a teacher for many years: How can a teacher or parent cultivate the autonomy of students or children?

“Autonomy” – from the Greek words for “self” and “law” or “norm” – refers to the capacity for self-governance, for setting your own goals and sticking to your own principles. It’s an important concept for many of the 17th and 18th century philosophers I have spent most of my life studying.

As many of these philosophers point out, autonomy is not just a matter of doing whatever you feel like. Real self-governance is hard work. It requires the ability to resist external forces that would dictate thoughts and values for you, and developing the means for making decisions about belief and value in an informed way. As Kant put it in “What is Enlightenment?,” “Enlightenment is the human being’s emergence from his self-incurred immaturity,” where “immaturity” is “the unwillingness to use one’s own understanding.” Kant offers, as examples of immaturity,

a book to serve as my understanding, a pastor to serve as my conscience, a doctor to decide upon a regimen for me, and so on … I need not think, if only I can pay: others will readily undertake the irksome work for me.

In place of turning to others to think for you, Kant challenges his readers to “have the courage to use your own understanding.”

In today’s pluralistic world of mass media and the increasing dominance of arcane science, the problem of autonomy is only growing more intense. Students and children not only have books to understand for them, but they are subjected to media influences that threaten to overwhelm independent thinking and that often deliberately seek to sway thoughts and values for the sake of power or profit. Our contemporary pluralistic world confronts students and children with an array of value-options that require careful and independent reflection but that provide no framework for engaging in that reflection.

At the same time, science has become both more impenetrable, in that literally no one is capable of independently assessing the validity of even a sizable fraction of scientific “knowledge,” and more dominant, in that people are increasingly willing to refrain from thinking about the nature of the world altogether, deferring to “the best scientific theory” at the time.

The world in which my students, and my children, are growing up is one in which it is increasingly difficult to rely on one’s “own understanding.” That difficulty challenges me as a teacher, and as a parent. How can I cultivate autonomy in the world today? The problem is particularly poignant because anything that I do will be yet another external influence on the thinking and values of my students and children. This is a tension that I have felt acutely ever since I began teaching. Finding the right balance between correcting error and letting students think for themselves constantly drives me back to asking my basic question about education and autonomy: How can a teacher cultivate the autonomy of his or her students?

For examples of how I try to strike a balance between education and autonomy, look at the syllabi for two of the courses where it is most difficult:

A natural step in attempting to answer this question was to teach a course on the topic. Since 2008, I have regularly offered a course titled Education and Autonomy that focuses on three educational philosophers who make autonomy a central focus of education: Jean-Jacques Rousseau, Immanuel Kant and Maria Montessori. This course has been exciting to teach. It is a natural context for incorporating service learning, as students reflect on how the course material relates to real-world teaching (ranging from working with toddlers at a popular local preschool, to tutoring elementary students at local public schools, to working as a teaching assistant in English-as-Foreign-Language courses at Walla Walla Community College).

After the first version of the course, I wanted to change the class dynamic by making even more explicit my role as co-learner, so I applied for a Whitman Innovation in Teaching and Learning grant to add rock climbing to the course. Among other things, this let me learn alongside my students, which allowed me to model what it’s like to try to learn independently while still respecting one who is more skilled and knowledgeable. Climbing is also a great context for seeing the extent to which one must actually make skills one’s own (since another’s climbing skill can’t get me up the wall!) and also the ways in which autonomy, rather than isolating people, can bring them together.

My long walks with my first son fed my desire to figure out what role teachers and parents can play in the cultivation of young people’s autonomy. Today, as the father of two additional little ones, I have been given the opportunity in the form of a grant from the Spencer Foundation to engage in focused scholarly research on what I have come to see as a “double” problem of education and autonomy: how to promote the autonomy of students and children while also respecting what autonomy they already possess. Ultimately the work will deepen my knowledge and understanding into the problem of autonomy that will be used to enhance my courses at Whitman.

The research also will permit me to develop the wisdom gained from years of teaching at Whitman into a scholarly agenda that can help put autonomy – as both a goal and as something to be respected – more at the forefront of contemporary discussions about what constitutes effective education.