The following speakers represent only a small selection of the broad range of nationally acclaimed artists, authors and lecturers who visited campus and interacted with Whitman students this fall. 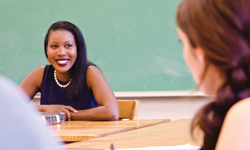 Isabel Wilkerson Oct. 2
Author and award-winning journalist Isabel Wilkerson spent 15 years researching and writing the book that would become Whitman’s 2012 Summer Read selection: “The Warmth of Other Suns: The Epic Story of America’s Great Migration.” She delivered a public lecture in Cordiner Hall. Wilkerson is a Pulitzer Prize-winning journalist and the first author to take on the subject of the Great Migration. Her book chronicles the experiences of three individuals fleeing the Jim Crow South for cities in the northern and western U.S. Between the start of World War I and 1970, nearly six million African Americans made this journey in search of better lives. During her visit, Wilkerson stopped by a sociology class and met with community members at the Walla Walla Public Library. As part of Fall Orientation, RAs and SAs also led discussions about the book in the residence halls. 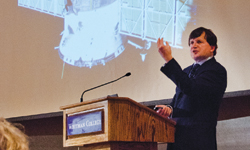 Charles Simonyi Nov. 1
Microsoft software engineer Charles Simonyi, the fifth-ever private citizen to journey into outer space, regaled a crowd with his talk, titled “Space Tourist: Training and Mission.” Simonyi made two trips to the International Space Station, in 2007 and 2008. Only about 500 people in the world have experienced orbital spaceflight. He is the first private citizen to journey into space twice. In his presentation, Simonyi, a Seattle-based philanthropist and chairman and CTO of Intentional Software, described the intensive eight-month training program he underwent in Moscow. He included photos of Earth, taken aboard the Soyuz spacecraft, which inspired “ahhs” from the crowd, while his wisecracks about Soviet-era technology and personal anecdotes of life in space drew laughter. “When people ask me about space, I really get going,” he warned the crowd. “I’m really honored to be here. This is my first time in Walla Walla, and seeing parts of your beautiful campus really makes me wish that I could go back to school.” 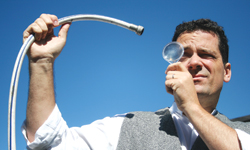 Jamie Workman Nov. 14
O’Donnell Visiting Educator Jamie Workman presented his talk, titled “Save the River, Kill the Trees,” which was the first installment of a three-part lecture series, titled “Three Things Your Parents Didn’t Tell You About Water Conservation.” A graduate of Yale and Oxford, Workman was an award-winning investigative journalist in Washington, D.C. He then served as special assistant to the U.S. Secretary of the Interior and oversaw the nation’s dam removal efforts. Since then, he has advised corporations, governments and international NGOs on natural resource policy, and he has published dozens of articles and several books about how to unlock the true value of water.