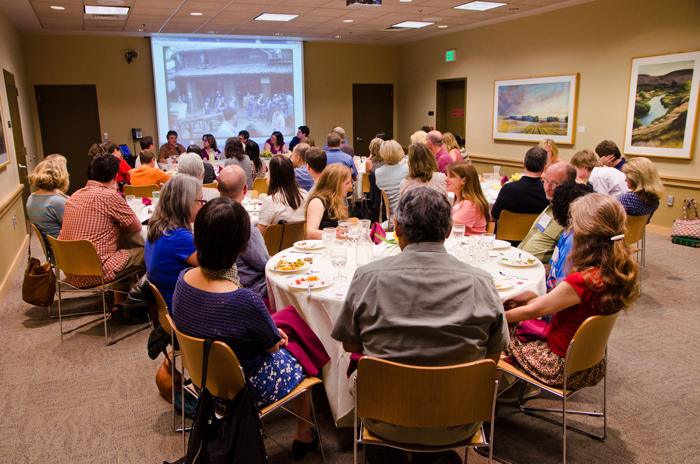 Thirty-two alumni returned to Whitman to celebrate the 30th anniversary of the college’s Whitman in China program last September. This was the first reunion on campus for the program, which sends Whitman students to China for a year to teach English at university level.

The reunion gave the WIC alumni the opportunity to connect or reconnect with other alumni participants who, as David Atwill ’89 said, shared “the common thread” of having spent one year of teaching in China.

Since it was founded in 1982 by then Prof. David Deal (later dean of the faculty), the Whitman in China program has sent 167 students to China and brought a total of 60 Chinese faculty and students to Whitman to enroll in classes or serve as native speaker teaching assistants in the Mandarin Chinese language program.

“It’s clear that this program has touched thousands of lives, not only the Whitman graduates who taught in China and the Chinese faculty and students who came to Whitman, but also the lives of all of their students, colleagues and friends,” said Susan Holme Brick, director of off-campus studies and a member of this year’s Whitman in China Steering Committee.

“For WIC alumni, the program helped to jump start their careers in business or journalism or teaching and to establish life-long friendships with students and others in China.”

Matt van Osdol ’04 says that spending a year teaching in China completely altered the direction of his life, including his marriage.

“The WIC program was fundamental to setting the foundation and initial direction for much of my professional and personal life. I remained in China for a total of seven years after the program, during which I got married, began a career doing business in China and had the opportunity to see many parts of an incredible country,” said van Osdol, currently in the MBA program at the University of Washington.

While the WIC program was a transformative experience for many students, it was also, to put it simply, fun.

“One of the best things was getting to know my oh-so-excited students,” said Lisa Mattson ’10. “We got to have a lot of fun talking, learning about each other’s cultures and playing Ping-Pong. Of course, I can’t leave out my being interviewed three times for the local talk show or going on a game show that involved me chugging cola, catching marshmallows in my mouth and tango dancing on province TV.”

These were just a few of the stories shared at the reunion, which also illuminated the many changes that China has undergone over the past 30 years since the inception of the program.

“It was incredible to get firsthand accounts demonstrating how much China has changed,” Mattson said. “Despite all the differences throughout the years, however, it was fascinating to get to talk to some of the past participants about the surprising similarities in their experiences and how Whitman in China has shaped their lives.”