Working Behind the Scenes 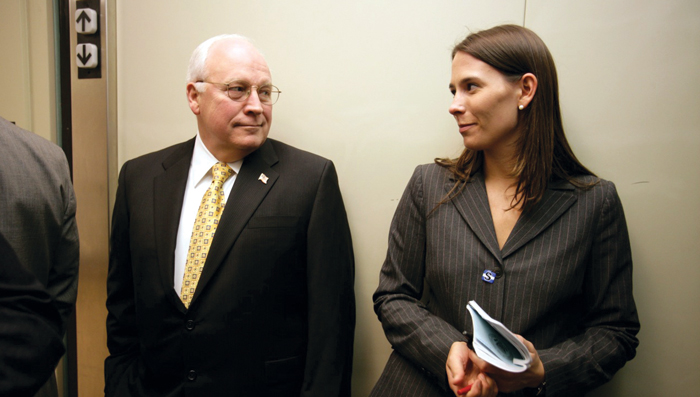 Katie Wilson McBreen ’02 worked as an advance associate for former Vice President Dick Cheney. After traveling all over the world with the vice president, McBreen is now a veep herself – VP of communications and public affairs at the National Retail Federation.

Iraq and Afghanistan. Katie Wilson McBreen ’02 traveled to two of the world’s most dangerous countries while serving during the Bush administration as deputy director of advance for the Office of the Vice President.

In Afghanistan, she rode in a convoy that took her the 27 miles from Bagram Airbase to Kabul. She wore a helmet and a 30-pound Kevlar vest and was surrounded by Secret Service agents with guns. “I was the only woman on the trip,” said the former politics major.

Despite the dangers associated with going to a war zone to handle logistics for Vice President Cheney, or the stress of coordinating his travel to events such as the vice presidential debates and the Republican National Convention, McBreen loved her job.

“It’s the most amazing job I have ever had. I was able to see the world in a way that you can never see as a tourist,” said McBreen, explaining that she was present to witness the inauguration of Hamid Karzai as president of Afghanistan. “It’s the best job I will ever have in my lifetime.”

Working in advance means planning every detail of a trip and then making sure it runs smoothly. When working for a sitting vice president, it means handling all the logistics of getting the VP anywhere outside of the nation’s capital, from the time he boards Air Force Two to the time he returns to Washington, D.C.

Like many things in life, it’s the details that count. In White House politics, overlooking a small detail can cause an international outcry. McBreen gave the example of when Vice President Cheney traveled to Poland in January 2005 to commemorate the 60th anniversary of the liberation of the Auschwitz-Birkenau Concentration Camps.

McBreen remembered it caused a major stink. The Washington Post ran a story in the style section about the vice president wearing the olive drab parka. It was “the kind of attire one typically wears to operate a snow blower,” the paper reported.

“The press complained that the vice president was disrespectful, but it was nothing more than it was cold,” McBreen said. “He needed a jacket, and we hadn’t planned for it.”

The Road to the White House 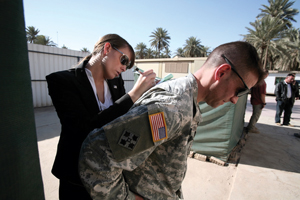 A liberal arts education can teach students to improvise and to think on the fly – two skills that come in handy in Iraq. Here, McBreen writes notes on the back of Cheney’s military aide.

McBreen started at the White House straight out of college; however, it wasn’t something she planned. It came about with a little bit of luck.

“I got that job by being at the right place at the right time,” she said. “The person who had the job was from Idaho, where I’m from. I met him on one of my internships, and I kept his information. After graduation, I emailed him when I got to D.C., and there just happened to be an opening.”

It’s said that people make their own luck, which is what McBreen did while studying at Whitman. She completed two summer internships in Washington, D.C., where she learned to network, something that becomes more effective if a student takes the time to sit down and write letters to contacts.

“You can never underestimate the power of a handwritten note. I wrote a lot of thank-you notes. Everyone emails and sends things in a digital file. But I guarantee, if you send a handwritten letter to someone, they will remember you.”

McBreen also credited the professional experience she gained at Whitman for her success.

“I liked to dress up, so I was looking for a professional job on campus. I began working at the admission office, which gave me an introduction to the professional world. Here I was, still a student, interviewing potential students and their parents. I learned how to be professional.

“Whitman also teaches you to be diverse in the things you try. That allowed me to be open to all the crazy things that happened when I was working at the White House.”

Whitman, she then joked, also prepared her for the White House, because in school, she learned how to stay up late.

Leaving the buzz of the White House can be a let down. Few jobs compare to rubbing shoulders with the most powerful politicians in the world. Although she admitted she finished her three-year stint feeling a little down, McBreen is now energized by her current job at the National Retail Federation, where she builds and leads comprehensive communications campaigns to advance the NRF’s agenda and brand.

She’s no longer in politics, but she remains on the periphery of the political world. When lobbyists from the world’s largest retail trade association go to the Hill to advocate for the interests of large retail chains, such as Macy’s and Neiman Marcus, as well as the small mom-and-pop retailers around the country, they are using messages she has written.

“Ninety-five percent of all retailers operate in just one location,” McBreen said. “We talk about issues of tax fairness and health care – a wide range of issues that the traditional business community faces.”

Although the National Retail Federation isn’t a household name, its work is ever present. The NRF releases the monthly retail numbers, which serve as a barometer for the economy. It also releases holiday spending estimates and even compiles such information as the year’s top 10 Halloween costumes.

“This year, everyone wanted to be Big Bird,” McBreen said, noting that the affable yellow bird became more popular after the presidential debates.

In the thick of her job, McBreen uses many skills to manage NRF’s media relations team, but the skill she values the most is her ability to write, which she honed at Whitman. Success in business or politics, or anything for that matter, she said, comes down to knowing how to write.

“When I’m looking to hire someone, I’m always looking for good writers. You’d be surprised by how many bad writers there are out there. It’s such an important skill, because getting anything done comes down to effective storytelling, whether in an interview, on a resume or in a job.

“In fact, politics is storytelling, and such a huge part of that is writing. Who can tell the more compelling story? This is what the presidential election is all about. Who can tell the story that at least 51 percent of the American people will like,” McBreen said, proving that the best job she’s ever had remains present in her mind.