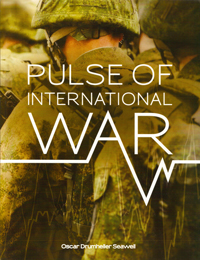 Oscar Seawell ’47, professor emeritus, University of Regina, is the author of “Pulse of International War.” (Benchmark Press, 2012.) The book describes and graphically illustrates repetitive international warfare level pulsation patterns. Ancient and recent wars are scaled to comparable levels by dividing international battle counts by world population. Graphs show pulsation over 26 centuries, and tables provide detailed data. Seawell uses and expands upon data based upon the work of prior researchers Wheeler, Dewey and Clodfelter. Long cycle lengths between peak international warfare levels have been decreasing, from more than 16 decades after a peak late in the 11th century down to 13 decades between peaks of Napoleonic Wars and World War II. Peak levels are followed by shorter length warfare pulse beats that first tend to become weaker then grow more intense when approaching the end of long cycles, as happened with World War I preceding World War II. Seawell projects patterns from the past seven centuries onto the 21st century, and he suggests possible reasons for the existence of the pulse of international war. 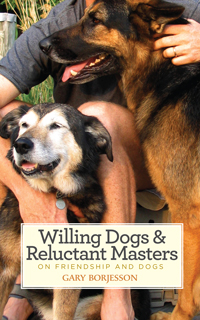 Gary Borjesson ’86 has authored his first book, titled, “Willing Dogs & Reluctant Masters: On Friendship and Dogs,” (Paul Dry Books, Inc., 2012). The book is described as follows: “Gary Borjesson explores what it means to be friends – real friends – with a dog and how that relationship can illuminate and inform the other friendships in our lives. Dogs are remarkable creatures. More than any other animal, they share with humans a deep interest in friendship, cooperation and justice. (That’s probably why we love them so much.) In ‘Willing Dogs & Reluctant Masters,’ Gary Borjesson explores the sources of – and justification for – our authority in the master-dog relationship, while inviting readers to ponder the role of authority in friendships among people, as well.” On a personal note, Gary reports that after teaching at St. John’s College in Annapolis, Md., for the last 13 years, he and his wife, Cindy Boersma ’86, have moved back to the Northwest. “We’re now living in the mountains east of Ashland, Ore. Whittie friends: Look us up if you’re in the area.”