President George Bridges makes remarks on the Alexander Stage during the HJT rededication celebration on Sept. 30.

The curtain has risen on a state-of-the-art renovation and expansion of Harper Joy Theatre.

Breathing new energy into Whitman's heralded theatre department, the 18-month, $7.4 million project will serve the needs of faculty, staff, students and community members for years to come. The new layout was designed to enhance efficiency and allow more artistic freedom for the department while fostering greater openness to the community. 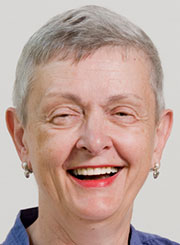 In his remarks during the reopening celebration for HJT, Peter van Oppen '74, chair of the Board of Trustees, shared a personal connection to the theatre, saying it led to perhaps his family's "most important" contribution to Whitman.

Through her work as a choir director, his mother, Elizabeth Fouts van Oppen '40, "sang the praises" of Whitman. Among the families to hear that message was that of Nancy Simon '63, who came to Whitman to study with Elizabeth's classmate, Rod Alexander.

Simon, beloved by generations of Whitman students, is Garret Professor of Dramatic Art and has devoted more than 40 years to teaching theatre at Whitman.

HJT now boasts a new, larger black box theater named the Freimann Studio Theatre in honor of former Harper Joy Theatre Director Jack Freimann. The former Freimann Stage has been transformed into a space for acting classes, rehearsals and student-produced plays. The seats in the Alexander Stage have been replaced, and the rigging, lighting, electrical, heating, ventilation and air conditioning systems have been updated. Backstage, students will enjoy access to a new prop shop and a greatly improved costume shop. The entrance and lobby of HJT also have been expanded to accommodate patrons.

"Every aspect was considered in detail, and I'm excited about all the changes and how they will contribute to the department and production season as a whole," said Chris Petit, associate professor of theatre and chair of the department. "The theater is equipped with the latest technology, which allows for an expanded sense of production and the ability to do things that were simply not possible in the old facility."

He believes the renovations will attract even more student and faculty recruits to the department, which has tripled in size since the 1970s. On average, more than 400 students take theatre classes, and more than 250 participate in one or more productions annually.

At the Sept. 30 HJT reopening celebration, which packed the seats of the Alexander Stage, Petit praised the updated facility and its many benefits for students, staff, faculty and the community.

"It's a really great time to be working at Whitman College," he said.

Originally built in 1958, HJT produces eight to nine fully mounted productions and 15 smaller student productions each season, reaching about 8,000 total audience members. The production schedule is one of the busiest of any college or university theater in the western United States.

"For more than 100 years, theatre has had a home on our campus," said Thomas Hines, professor of theatre. "This renovation is a tribute to the tenacity, passion, aspirations and unbelievable hard work of those who laid the program's foundation. This glorious laboratory for teaching and performance is a gift from the past to future generations of students, teachers and patrons of theatre."

"This renovation reflects the grand history of theatre at Whitman College," said John Bogley '85, vice president for development and college relations. "These donors, along with the other alumni, parents, friends and local foundations who supported the project, have demonstrated their support and commitment to Harper Joy Theatre's growth and continued excellence. This project benefits everyone, from the actors on stage and the artists in the costume shop to assistant directors and sound and lighting technicians, as well as our theatre audiences."

Thanks to the support of Shannon and Peter van Oppen '74, Kendall D. Tieck '74 and Laura, Peter and Tyler Kent '07, the renovation also included six new faculty and staff offices, bringing office and teaching space together.

"Now we have a building worthy of our talented students and teachers," Hines said. "Let teaching, learning and the play begin." 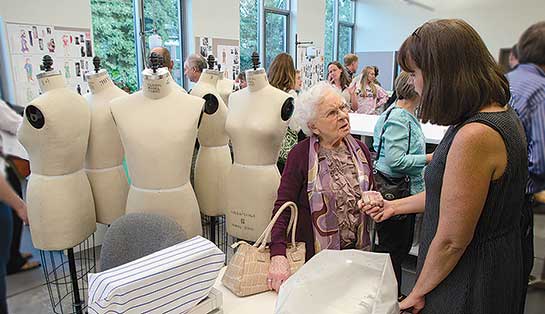 The renovation brought a major makeover to the costume shop, thanks in large part to the generosity of Trustee Emerita Libby Main Welty, pictured here talking with a student. It is named the Welty Costume Shop in her honor.