"You get out what you put in" is a classic phrase used by coaches to inspire hard work and commitment in their players. This saying also holds true for Whitman's W Club, a group of 655 alumni, parents and friends whose gifts demonstrate their dedication to varsity athletics as an integral part of the liberal arts educational experience at Whitman College.

During the 2010-11 year, W Club donors raised and contributed significant funds to support coaching, equipment, team travel and recruitment, helping Whitman build a varsity athletic program that is on par with its outstanding academic reputation and one that puts its student-athletes on equal footing with their peers at comparable colleges.

This banner year for athletics fundraising coincided with the finest season in Whitman's 12-year NCAA Division III history. Whitman Athletics Director Dean Snider sees a correlation: "The W Club's financial assistance, energy and enthusiasm have given our coaches and student athletes a tremendous boost. It is no coincidence that our steady progress up the NWC rankings has taken place since the W Club was established five years ago."

"Over the years, many former Whitman varsity athletes have expressed their wish that varsity athletics better reflect the excellence of Whitman overall," said John Bogley '85, vice president for development and college relations. "Gifts to the W Club are one way to make that wish a reality." 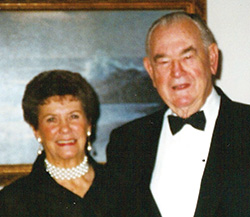 The L.W. "Scotty" Cummins Varsity Baseball Endowment is named in honor of a 1938 graduate and 2006 inductee to Whitman's Athletics Hall of Fame. Cummins was a talented presence on the ballfield, earning all-conference honors as a hard-hitting catcher. After graduation, Cummins turned down professional sports offers and instead taught history and coached at schools in Stevenson and La Center, Wash. After serving in the U.S. Navy during World War II, he opened Walla Walla's Scotty Cummins Athletic Supply, which he ran until his retirement in 1975 and which continues to bear his name. Cummins, now 95, is an emeritus member of the Whitman Board of Overseers and lives in Walla Walla. 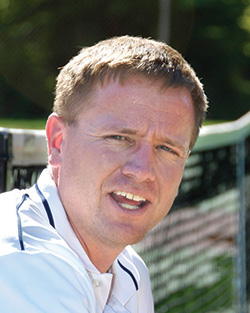 Jeff Northam has been voted Northwest Conference Coach of the Year four times.

The Jeff Northam Tennis Endowment is named for Senior Lecturer of Sports Studies and Head Men's Tennis Coach Jeff Northam '88. Since his return to his alma mater in 1997, Northam has been voted Northwest Conference Coach of the Year four times. In 2010, he received Whitman's George Ball Award for Excellence in Advising, recognizing his work with students in academic planning. Under his leadership, the men's team competes nationally with great success. Currently, the team is undefeated in 68 consecutive conference matches. With a lead gift from J. Benson Porter '88 — a classmate and teammate of Northam — a group of alumni created this endowment in tribute to Jeff's many contributions to Whitman athletics and in support of the men's tennis team's ongoing success. Porter has served on the Board of Overseers since 2006. 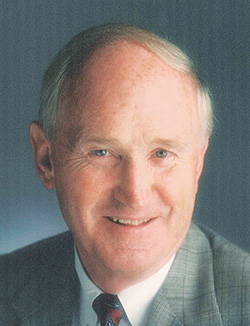 The Max Johnson Varsity Men's Basketball Endowment honors Max Johnson '59, a 2005 Whitman Athletics Hall of Fame inductee and all-conference performer in basketball. Johnson holds the distinction of being Whitman's last four-sport letterman. He earned a total of 10 athletic letters — four each in basketball and baseball and one each in track and field and football. Known as "Red Dog," in reference to his hair color, Johnson capped his illustrious college career by winning the 1959 Borleske Trophy, which is given annually to the top male athlete. Johnson also earned Phi Beta Kappa honors at Whitman and served as president of his senior class. After earning a master's degree in economics at Claremont College, he embarked on a long career in the telecommunications industry. Johnson served many years on both the Board of Overseers and Board of Trustees and continues today as a trustee emeritus. Johnson and his wife, Margaret Iversen Johnson '58, live in Bellevue, Wash. 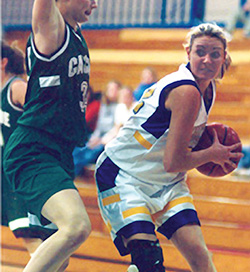 Kim Evanger Raney is remembered as an admired leader in women's basketball.

The Kim Evanger Raney Varsity Women's Basketball Endowment is named in memory of Kim Evanger Raney, a 2002 Whitman graduate and basketball player who passed away in 2007 in a bicycling accident. Evanger Raney enjoyed an outstanding career at Whitman, leading the Missionaries in rebounding in each of her four seasons. Recognized not only for her athleticism, Evanger Raney was perhaps most admired for her high standards and exceptional character — never wavering in her commitment to the team and her love for the game. Her leadership and compassion left a lasting impression on the program, which launched an annual tournament in her name following her death. This endowment furthers Evanger Raney's legacy in women's basketball at Whitman.

These new endowments honor those who excelled in their varsity sports at Whitman with long-term support for their teams. The partnership of alumni who benefited from the scholar-athlete experience at Whitman will ensure the future growth and success of our programs," Stanton said.

W Club donors continue to make a difference in the lives of Whitman's student-athletes, working with the college to develop and maintain athletic programs that support students as they successfully balance rigorous academic study with vigorous competition in intercollegiate sports.