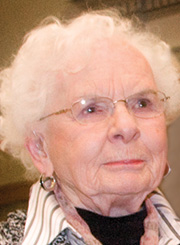 The Stephen B.L. Penrose Society, established in 2008, recognizes those who have given cumulative gifts of $1 million or more to Whitman College. The leadership and commitment of Penrose Society members have helped transform Whitman College from a small and committed college of western renown to a top-tier liberal arts institution of national prominence. A devoted Whitman alumna, Barbara Holmes Stevens has supported the college in countless ways — from her unrestricted gifts, to her efforts to help fund the Fouts Center for Visual Arts and Baker Ferguson Fitness Center, to her support of scholarship and internship endowments for talented and deserving students. In 2002, she made a leadership gift in memory of her husband, Frederick Stevens, Jr. '44, to the Stevens Atrium in the new wing of the Hall of Science. And in 2011, she created the Barbara Holmes Stevens Scholarship Endowment to assist students who might not be able to afford a Whitman education. During her time as a student, Barbara was a political science major who was a member of the Kappa Kappa Gamma sorority, the Mortar Board Society, The Arrows and the Phi Beta Kappa Society. Barbara served as President and Vice President of the Whitman YWCA and editor of the Waiilatpu. She also worked on The Pioneer and was a member of the Chapel Committee. She and her late husband made their home in Southern California. Barbara continues to live there and enjoys being near her family.