The Whitman men beat Whitworth, the No.1-ranked team in NCAA Division III, in "white out" conditions at home on George Ball Court Feb. 15 as fans donned white shirts in support of their team. "It's amazing when commitment collides with togetherness," said Whitman Coach Eric Bridgeland. "It felt like the entire Whitman community was there. What an environment, it was electric." The Whitworth Pirates came to the game as the top-ranked team in the nation; it left Walla Walla with its first loss of the season (82-79). The setback snapped a 34-game Northwest Conference winning streak for the Pirates. On Feb. 24, Whitman hosted its first playoff game since it joined NCAA Division III in 1996, beating Lewis & Clark 79-76. Whitman's best season in two-plus decades (19-8 record overall) ended with a playoff loss to Whitworth in Spokane on Feb. 26. Click to see an online photo gallery. 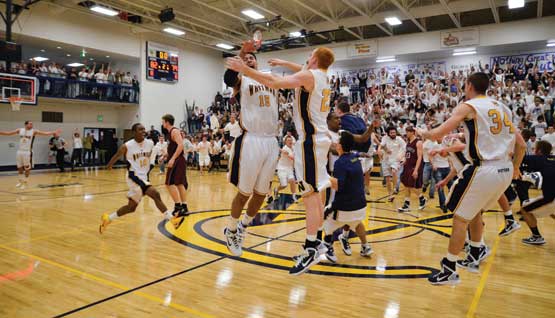